Years ago, recalls masman Peter Minshall, he went to a Kali puja in Tunapuna, and afterwards fell into conversation with a saffron-clad devotee. The other man marvelled, “All men are equal in the eyes of God.”

Minshall remembers responding, without missing a beat, “Would that all gods were equal in the eyes of man.” He must have been channelling something, he says, looking back.

Now he’s using that exchange to produce a band for Carnival 2018, The Eyes of God, in collaboration with Exodus – the steelband based in Tunapuna. That is, in one of those tricks played by the universe, where the conversation that inspired The Eyes of God took place.

Minshall stresses that he’s not “bringing a band” on his own; the press release about it is issued by “Exodus and Callaloo, Ainsworth and Minshall.” Ainsworth is Ainsworth Mohammed, CEO of the steelband. They first worked together in 2007, for the closing ceremony of the cricket World Cup in Barbados, which involved 300 pans as well as costumes by Minshall.

This year, working with Exodus again, Minshall produced Spiritus Mundi (The World Spirit), which was described as a “post-nuclear sailor mas.” There were touches of the midnight robber, too, as the all-white costumes featured skull-shaped headpieces of wire-covered white voile. Their mouths opened wide as though wailing (they recalled Edvard Munch’s painting The Scream). Trailing ghostly white streamers, they drifted through the streets of Port of Spain like spirits risen from the grave to impart some warning to the living. 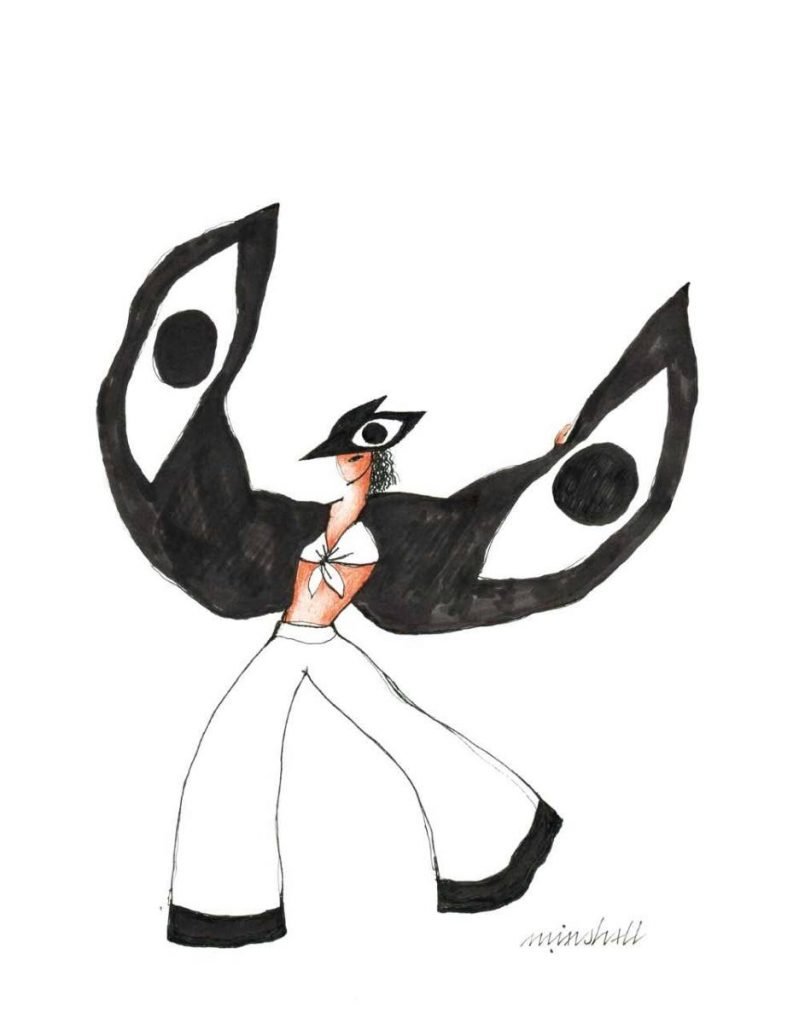 Like all Minshall’s work, the 2018 band builds on traditional costumes and characters, using them in new ways, and also evokes aspects of his own earlier bands, for instance the wings of Papillon (1982), his “big sailor band” Carnival of the Sea (1979), and the biblical themes of Paradise Lost (1976), Hallelujah (1995), and the Lost Tribe (1999).

It draws on a far older tradition too: ancient Greek drama, when ordinary citizens would flock to the theatre to see tragedies performed by a handful of professional actors, while a chorus of amateurs, like Minshall’s mas players, danced and sang of the dangers of offending the gods. Hubris – the arrogance that leads men to aspire beyond human status – was one of the sins that led to doom; and Minshall’s wish, “Would that all gods were equal in the eyes of man,” recalls the fate of King Pentheus in Euripides’ Bacchae.

He was torn to pieces by his own god-crazed mother for refusing to accept the divinity of Dionysus – from whose other name, Bacchos, Carnival takes the word “bacchanal.”

There are modern resonances, too, of course, of the religious confrontation that threatens yet again in the Middle East, and the conventional war against Isis that has evolved into a constant, ubiquitous threat of terrorism.

Set on a black background, the eyes of God on the red-tinged banners and the white costumes of the band are those of the god of the People of the Book, a jealous god who may not be best pleased with the current conduct of his creations.

Those eyes are watching us. But the first part of the band’s statement recalls Minshall’s stubborn belief in this country. He speaks of other, earlier slogans: “All ah we is one,” “One Love,” and the day in December 1986 when the country overwhelmingly voted for the NAR, a political party that promised to unite all the many races that live here. 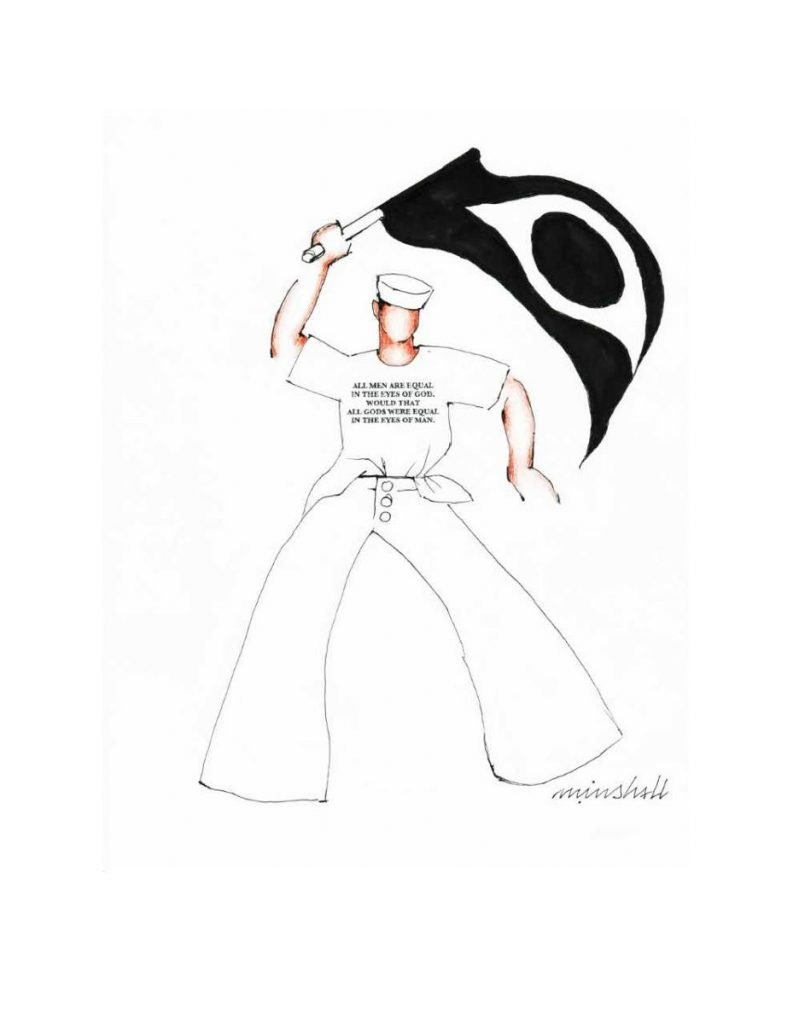 “We take these things for granted,” he says. “In this little island, we have all of Europe, Africa, Indian, Syria, China…You grow up with that, you spend holidays with Moti Narinesingh, whose grandfather is a pundit…” So the mood of the band is not one of foreboding. Instead, Minshall says in the press release, “We will make a contemporary work of art, in the medium of pan and mas, and in the media.

We will communicate our message to the island, to the Caribbean, to the world. It must be a work that is relevant to the times in which we live, both in its meaning and the manner in which it is done.

“Imagine, as John Lennon did.

“Or in the words of Michael Jackson, We are the World.

“Yes. Imagine, that we are the world, and we have a duty, a responsibility, a statement to make, a message to deliver, which will be as serious as it is uplifting and joyous.”

But sometimes a work of art can have a significance that its maker doesn’t realise at the time, just as when Minshall “channelled” something or someone in that long-ago conversation about God and man.

Clad in his perennial black, Minshall sat in the white gallery of his home last week to talk about The Eyes of God, under the branches of a samaan tree and a bright blue sky scrubbed clean for Christmas. He repeated his vision of this country, still, as an example for a divided world. He was pensive but not unhappy: the drawings for the band were almost done; he knew the work was good; and the practical aspects of production will soon be taken in hand by his Callaloo Company team and a group of young artists.

But looking back at his earlier work, he remembered Mancrab from the River trilogy, the cybercrab who represented – and prophesied – globalisation, technology, and rampant capitalism. “My God, where did Mancrab come from?’ he wonders. “That was 1983.” In the myth told by that band, the people, originally dressed in white, “bathed in Mancrab’s colours and in so doing they destroyed themselves.” Its full significance didn’t become obvious for years afterwards.

Likewise, The Eyes of God, as even the name suggests, has a moral, allegorical dimension whose layers of meaning may not immediately reveal themselves – even though its creator himself is upbeat about it, and says it communicates “the message that our island needs…A thought emerges and needs to be shared at a time when it’s needed.”

The secret of simplicity

Minshall’s knowledge of mas goes back many years. He talks familiarly about the work of George Bailey, Carlisle Chang, Harold Saldenha. He speaks with the same ease and camaraderie of great “fine” artists whose work also finds echoes in his own: the splashes of colour in River are a living version of Jackson Pollock’s splatter paintings; Red (1998) presented a live, moving version of Mark Rothko’s red paintings; the standard of River, carried by many people but forming a single, continuous river of fabric, evoked Christo’s Running Fence. 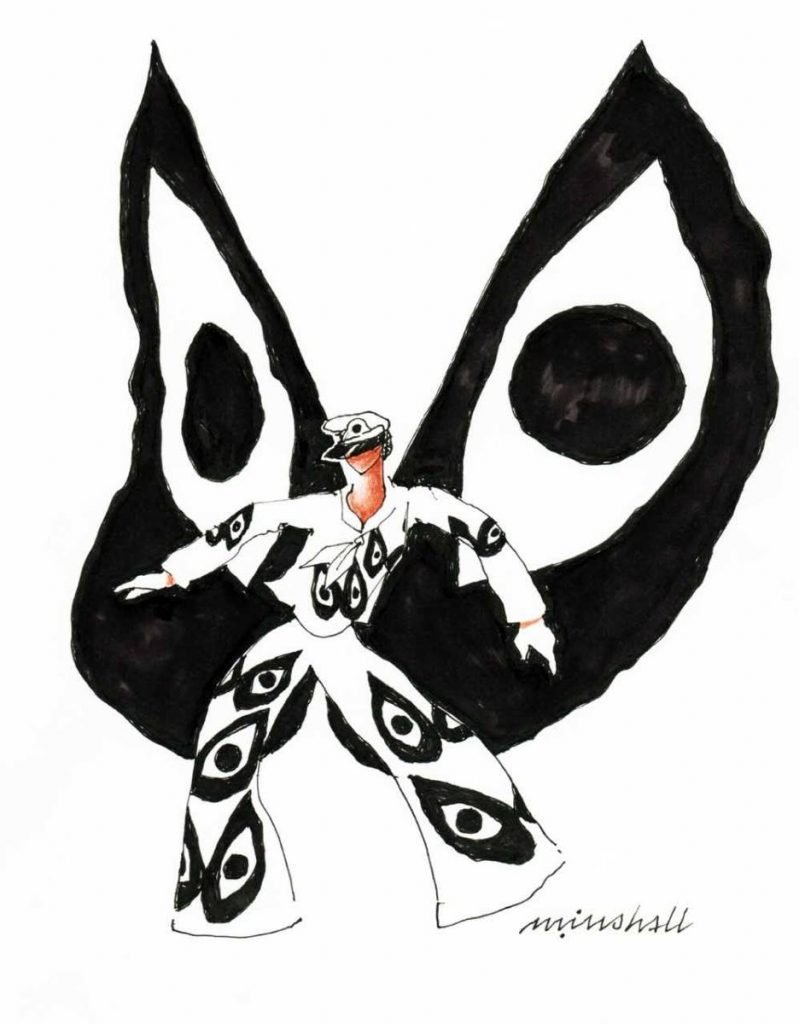 But like all Minshall’s bands, The Eyes of God is also a challenge to the idea that “art is something that happens in a gallery”: the costumes only come to life when people play the mas, and the magic of this one, perhaps more than any other, will be in the way it is played by the people. After all, it’s a sailor band in black and white that will be accompanied by pan, with not a bead or a sequin in sight. How much more basic can you get?

He always knew what the name of this band would be, but only recently did it come to him that it would be a sailor band. It may have a king (“please God,” he says), and four sections, among them All God’s Chillun Got Wings; he listened to Paul Robeson’s version of the Negro spiritual while working on the drawings, and wants a “rapsodised” version by 3canal to accompany the band across the stage.

He asked Byron Joseph, who, along with Kathryn Chan and other artists, helps to produce the Callaloo Company’s bands, whether they should make some wire headpieces, but Joseph said no; this band flows, as did River.

And so, as Minshall shows the drawings of the band, from the earliest to the last, in each successive one, something is stripped away: a banner, a pair of wings, a birdlike headpiece, the eyes of God painted on the sailor pants.

Minshall comes last of all to the costume that will be worn by the mass of the band: white sailor pants, beautifully tailored, high-waisted and fastened with three buttons that draw the eye. (They are the work of designer Ronald Guy James, “our chief of the cutting and sewing brigade for many years.”) The rest of the costume is a white sailor cap and a white T-shirt on which is printed in black the message of the band.

Everything inessential has been removed, and The Eyes of God conveys its profound philosophical theme with an audacious simplicity.