Retired head of the public service Reginald Dumas says he is "deeply disappointed and scandalised" by UNC MP Dr Roodal Moonilal's letter to the US ambassador about the alleged sale of fuel from Paria Trading Fuel Company to Venezuela.

The Prime Minister, who has condemned Moonilal's action, denied any knowledge of TT making fuel sales to Venezuela.

Speaking to Newsday on Tuesday, Dumas said as someone who spent much of his working life representing TT, "I have to say I was deeply disappointed and scandalised by that letter, because you do not involve foreign governments in your internal affairs. "If the US wishes to investigate, then it will investigate, and it will approach the government of TT and say 'Could you tell us your side of the story?'"

Dumas called Moonilal's action as "out of place." He said as an Opposition MP, Moonilal should never have run to the US Government "giving the impression he is already siding with them and that the TT Government behaved in an illegal way. He does not know that that is so.

" And you do not, in any case, on your own, involve foreign governments and foreign powers in your affairs."

Dumas said if the Opposition is free to criticise the Government.

"But you must not run before any investigation is done, find the government guilty by saying that what they did was illegal, and call on the US Government, in essence, to intervene in our internal affairs. You do not do that."

Dumas said he was certain Moonilal wrote the letter to ambassador Joseph Mondello with the consent of Opposition Leader Kamla Persad-Bissessar.

Dumas said if, in fact, the TT Government did turn a blind eye to the true destination of the shipment, knowing there are US sanctions against countries that trade with Venezuela, "then that is a government that will need to be examined very carefully, especially in an election year."

But he said at this point there is no evidence to suggest this was deliberate.

Dumas also said he is not "entirely comforted" by Energy Minister Franklin Khan's statement that the oil was sold to Aruba.

"I am prepared to give him the benefit of the doubt, but there has to be some more digging and investigation." 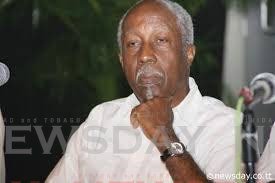