They have become known as trailblazers in TT’s metal music industry so, for their tenth anniversary, they decided to do it again.

The members of the band LYNCHPiN are heading to Cuba in August as part of a cultural exchange between the two countries. Sievan Siewsarran (vocals), Jignesh Khatri (bass), Aaron Maharaj (drums) and Gerard Ferreira (guitar), are going to play two festivals and a concert in Pinar del Río, Sandino, and Havana alongside Tendencia, a band considered to be metal icons in Cuba after 20 years in the business.

“They have a big rock scene and because Cuba is isolated in terms of traditional and social media it’s really hard to get artistes to go across. No Caribbean rock band has ever played in Cuba so we’re getting a chance to go across there, to break ground, and to establish that it’s something that could be done,” Siewsarran told Sunday Newsday.

He said it is difficult for Cuba to finance these types of ventures so the band would be footing the bill to get the rare opportunity to play in that country. However, the Cuban Embassy is helping the band by fast-tracking the necessary documents, marketing the visit, and making arrangements with promoters.

He said airfare alone cost $30,000 so the band is hosting a fundraising concert called 10 Years of Brutality, at Club Reign, Valpark Shopping Complex on July 20. Also performing will be local metal bands, among them Execution Mode, Bangaseed, Klavium, Beyond the Animus, and Bon Cane.

He said as members of Music TT, the band receive very little government support even though it has represented the country internationally on many occasions. LYNCHPiN, he said, had been doing so through its own pockets with the help and support of friends, fans and “friendly businesses.”

Siewsarran added that it is the band’s custom to contact the relevant embassy before travelling to another country and so its members have met three ambassadors but never a local culture minister. “It’s really disheartening that we are ignored because we are a rock band. We are breaking ground, getting a lot of things established for other local musicians, we are waving the TT flag all over the world, and we still can’t get a meeting with the culture minister.” When they approached the Cuban Embassy they learned about the cultural exchange. Siewsarran said they were warmly welcomed especially as the idea of rock music being part of the cultural exchange between TT and Cuba, and having their music recognised as Cuban rather than categorised as Latin-American or Spanish music was recently discussed. LYNCHPiN was also tasked with scouting Cuban bands to perform in TT next year, bringing Metal Cubano to this country’s shores.

He said for its tenth anniversary the band initially considered taking up offers to play in Europe. However, when members learned of Cuba’s passion for metal through Jerry Orrie, the manager of the Wacken Caribbean Metal Battle competition, they did some research and decided to do something that was untried. “We thought this could be something new and exciting, and we get to experience a different culture because none of us ever visited Cuba. It’s like we would be doing anthropology and rock music in one. So we decided to do something new again rather than going down the trail everyone walked. 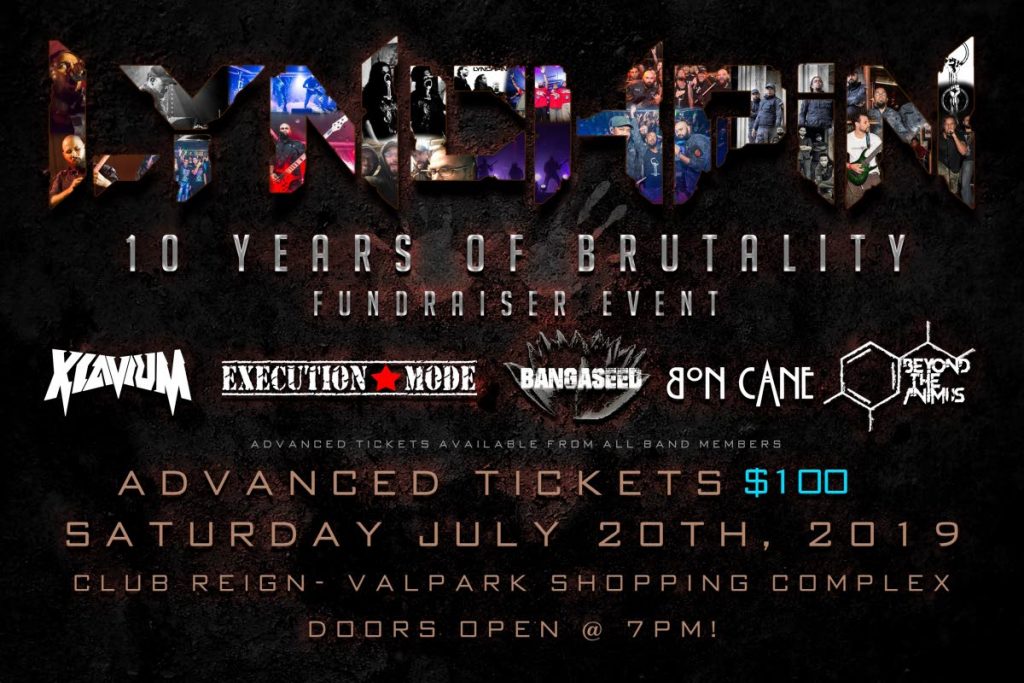 “Ten years is great milestone! I don’t think we imagined we would have such a huge effect on the rock scene – local and Caribbean. Our plan was to make a difference. That’s the essence of the meaning of LYNCHPiN. We never believe that we have ‘made it.”

We think we always pave a road that we know we will not get to drive on. One day, Caribbean bands will use that road to go further, placing our bands on the map again! In the mean time, we will continue to be Caribbean Brutality.”