The logos and branding of some of TT's established brands, including Flavorite Ice Cream, NIB, NCB (now First Citizens), Stag Beer, Standard Distributors, and TTEC, were all designed by Gérard A Besson.

The co-founder and former owner of Creative Advertising; now owner of the Paria Publishing Company, was recently honoured for his contributions to the local advertising industry and the brands that his agency helped launch.

Affectionately referred to as Gerry, Besson was inducted into the Creative/Ideator category of the Advertising Agencies Association of TT's (AAATT) third biennial advertising Hall of Fame on October 26.

In Besson's video tribute, he reflected that the early 1970s were a time of opportunity - with established agencies represented leading brands and institutions, new companies/products were looking for someone to help make them household names too. 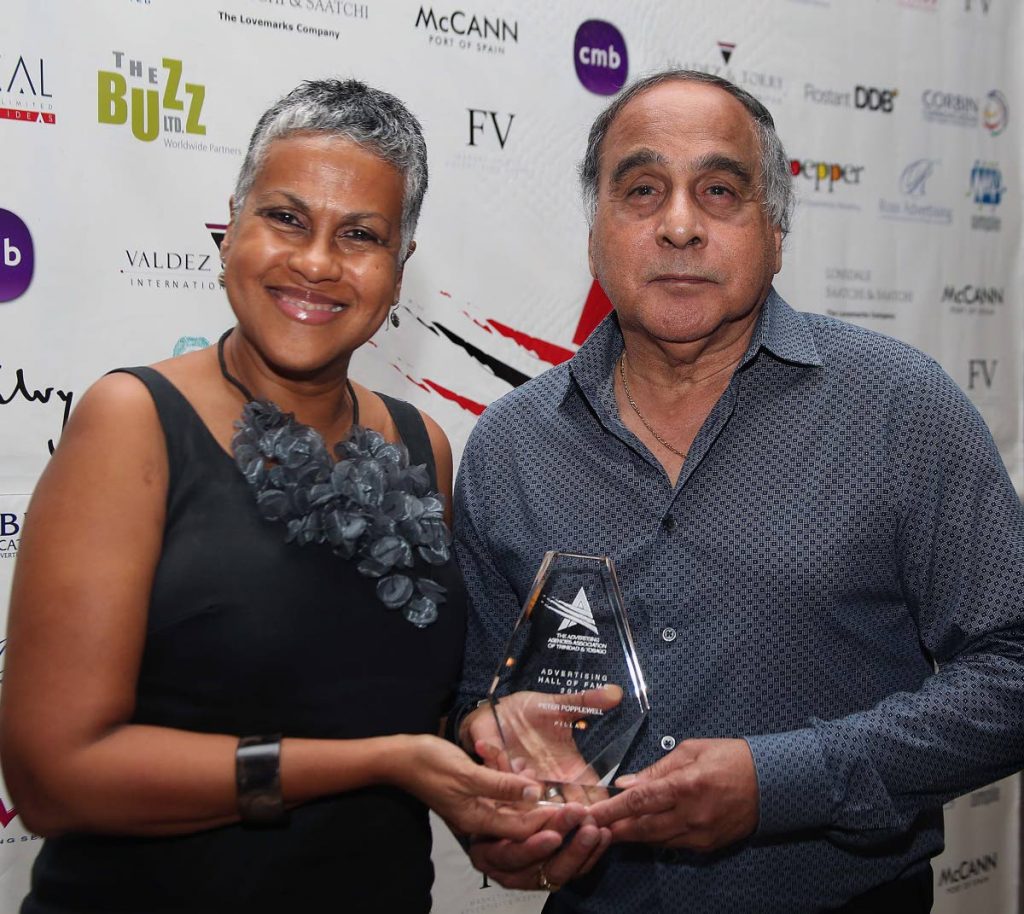 "With the oil boom, new institutions, products and brands came into being. This offered an opportunity for the launch of Creative Advertising Limited, which I founded in 1972 with Clive Bradley and Ken Chee. Sheelagh Hezekiah, who I married in the same year, would be my muse and inspiration in those early years and would later provide the stabilising element in both my career and in the ad agency that we would build together," Besson reflected.

Described by the narrator as the "fighting agency" if one wanted to challenge market leaders, Creative Advertising won the contract to put the National Insurance Board, 'on the map'.

Jerry organised the launch, designed the logo and produced the ads for print, radio and television. He was also responsible for designing the TT Electricity Commission's (TTEC) logo and the branding for its re-positioning under the chairmanship of Professor Ken Julien. "To present day, many of his logo designs and symbols are still in use," the narrator noted.

Speaking with Business Day after receiving his award, Besson expressed surprise to have been selected, having "been out of advertising for about 18 years now."

Asked what advice he'd give anyone considering a career in the industry, Jerry said, "Work hard and if you can't be passionate about the business, get out of it, otherwise you will have a bad experience."

"Advertising is really very close to show business. So you have to have an obsession with it - advertising must be the only thing you want to do, you have to be thinking about how to make it better, weirder, more interesting," Besson said with a smile.

The importance of creativity was echoed by co-founder and managing director of All Media Projects Limited (AMPLE), Alfred Aguiton. 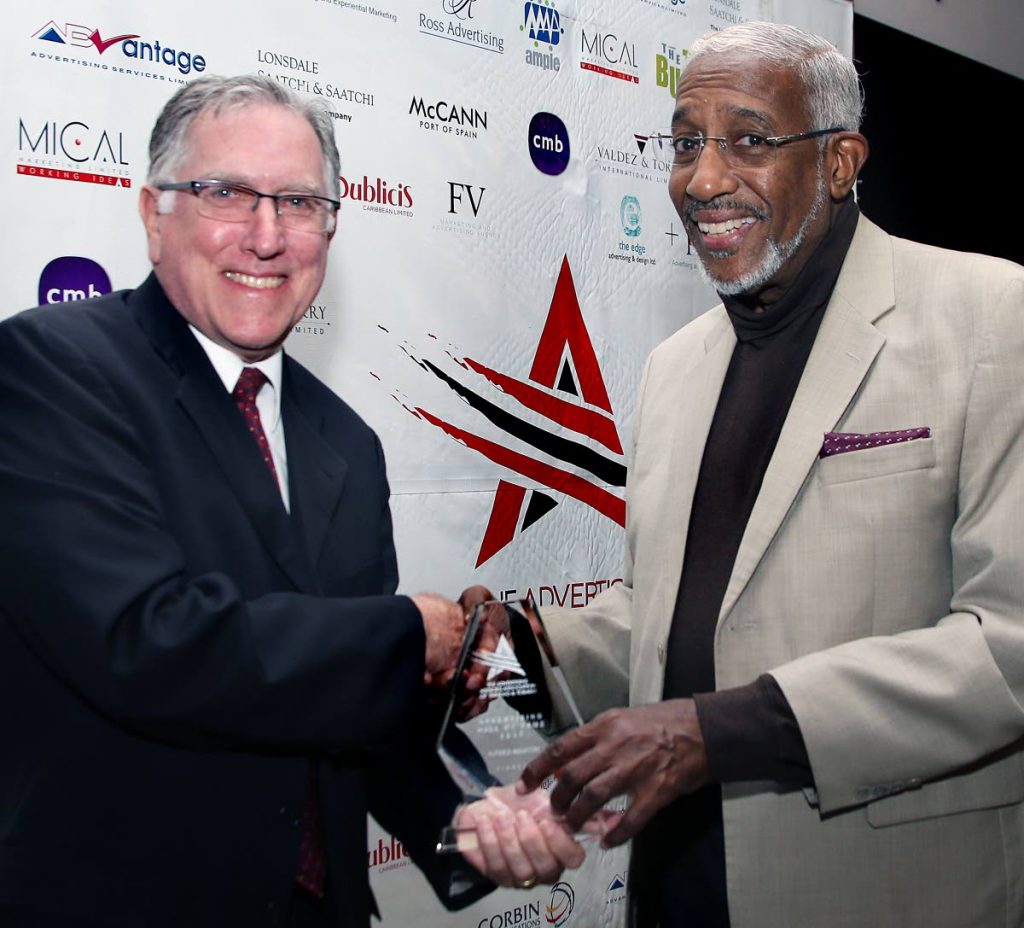 "Creativity is a gift that you must absolutely honour, cherish and most of all, share."

Aguiton also advised young advertising professionals, "Whatever you did to make their previous account a success, you've got to work infinitely harder on the next one, so that everything you do gets 100 per cent effort."

Aguiton and Astra Da Costa founded AMPLE in 1974 after their departure from NBS Radio 610, using loans of $4,000 each which they received from Philip Rochford.

The narrator of Aguiton's video said, "AMPLE got their first job from Hazel Brown (now honorary Dr Hazel) and Helen Camps, to do a campaign for the Housewives Association of TT, promoting breastfeeding. What followed were their 43 years of operations, during which Alfred and Team AMPLE have worked assiduously at making their contribution to this industry and its family of professional disciplines — pure Advertising, Public Relations, Marketing; plus, a few later-arising activities called ‘Crisis Communications’, ‘Event Management’."

Aguiton has juggled his advertising career with roles as chairman of the National Carnival Commission, director-general of two Carifesta (Caribbean Festival of Arts) events, lead co-ordinator of Pan-Jazz Limited, commissioner at UNESCO, Board member at Yahweh Foundation, and four years as special advisor to then Prime Minister Patrick Manning.

during her interview with Business Day, Georgina Popplewell, daughter of the late Peter Popplewell, reflected on his passion for integrity and ethics.

"My father was really very, very concerned about the integrity and standards of the advertising industry and he worked very hard in that respect. I think the industry suited him in a lot of ways because he was a very sociable, creative person but also a person who believed very strongly in things being right, people being treated fairly, ethics. That was reflected in his (key role) in drafting the industry's code of conduct," Popplewell said.

The narrator of Popplewell's video recalled that it was his "steadfast devotion to standards" which saw him make his way up the ranks from an account executive at Kenyon and Eckhardt Caribbean Advertising Agency (K&E) to managing director and joint owner. Popplewell's 20-year career at K&E ended with the agency's closure in 1988.

Popplewell then joined Lonsdale Saatchi & Saatchi as head of Client Services, "overseeing a team servicing some of the most sought-after clients of the time, such as Carib, Bermudez, Vat 19, TSTT, Scotiabank and Air Canada."

Popplewell was appointed to the agency's board of directors in 1994, a post he held until his retirement in 2001.

The narrator noted that 'Pops' "tireless dedication to ethics made him a key figure in the formation of a nuclear committee that drafted the Code of Advertising Practice in 1979."

"Twenty years later the code would be revised under his stewardship, evolving into the 1999 TT Standard Requirements for Advertising. His administrative portfolio also included the development of the Code of Ethics for the AAATT as well as working on the legal framework of advertising which included existing copyright legislation."

In addition, Popplewell served as secretary of the Advertising Standards Authority, was responsible for administering the Trinidad and Tobago Bureau of Standards on advertising matters and arbitrated inter-agency complaints.

The narrator noted that Popplewell's achievements included playing a significant role as AAATT representative, "in negotiating the revised terms and conditions for recognition and accreditation of agencies by the TT Publishers and Broadcasters Association as well as the agreement between the TTPBA and AAATT for agency commission and early payment discount structure."

'Pops' was also a much-loved member of the advertising community. He was also a good cook, mastering the fish broth and playing the cuatro at "any social gathering".

His colleagues also remembered Popplewell as "a gentleman who could be trusted with secrets" and who served as mentor to many.

Reply to "3 pioneers honoured for contributions to advertising"