FINANCE Minister Colm Imbert is optimistic that changes to the supplemental petroleum tax (SPT) is the one move that could encourage new investment in the energy sector.

Imbert expressed this optimism when he presented the 2022/2023 budget in the House of Representatives on Monday.

Former energy minister Kevin Ramnarine and UWI economist Dr Vaalmiki Arjoon, however, said optimism about improvements in the energy sector could be balanced with the necessary caution that goes with the volatile nature of the global energy industry.

Imbert said a careful analysis of TT’s competitiveness as an oil province for investment was done.

On the basis of that analysis, Imbert said, “I propose to enhance the current SPT concession for small onshore oil producers and introduce in 2023 a tiered system of SPT at lower rates for shallow-water marine operators, as opposed to the current fixed rates of SPT of 18 per cent, 25 per cent and 33 per cent that kick in as soon as the price of oil crosses US$50 per barrel.”

Imbert outlined how this system would work

“Firstly, the production limit for small producers of oil on land to benefit from the previously increased threshold price of US$75 per barrel for oil before SPT is applicable will be increased to 4,000 barrels a day.”

In relation to new oil wells in shallow-water marine areas, whether in existing fields or new fields, Imbert outlined SPT rates for them.

These measures will require amendments to the Petroleum Taxes Act Chap 62:01 and will take effect on January 1, 2023. 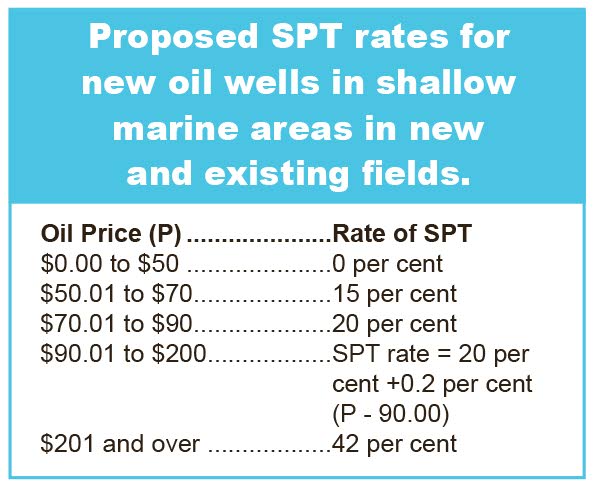 Imbert said, “We believe that these reduced rates of SPT for new oil production in the marine areas will allow companies to access the required financing to increase their drilling and get approval for new exploration and production programmes, thus increasing the production of much needed oil.”

The methodology for determining what will be defined as a “new” well will be discussed with oil companies before the new SPT rates are implemented in January.

Imbert also said Government is “looking at adjustment of other oil and gas taxes and other innovative fiscal incentives to encourage new investment in the sector.”

He added, “We will advise on these and other adjustments to the energy tax regime in due course after consultation with the oil and gas companies.”

As he reflected on the economic challenges TT faced over the last two years during the covid19 pandemic and new challenges posed by ongoing events such as Russia’s invasion of Ukraine in February, Imbert underscored the continued importance of the energy sector to the economy.

"As an oil and gas-based economy our fortunes have been impacted by the external shocks which have hit the world economy in recent years.”

Imbert said while this has been happening, as evidenced by the fact that the non-oil sector now contributes over 50 per cent of TT’s GDP (Gross Domestic Product), the energy sector remains key to future economic stability and growth.

“It is a fallacy for people to insist that we should not focus on enhancing and strengthening our oil, gas, and petrochemical sectors.”

On Tuesday, Young said fiscal measures announced in the budget in relation to the energy sector, including the proposed SPT changes, were based on submissions made by his ministry and collaborations between Imbert and himself.

“The government is focused on promoting and facilitating exploration and production of oil and gas and keeping TT’s hydrocarbon industries going as we compete for local and global capital and investments.”

Young added, “We recognise that we are a mature (energy) province and that we need to revise the fiscal landscape to find an appropriate balance between earning revenue for our resources whilst making it attractive for companies to spend money on exploration and production to achieve a good return.”

Ramnarine on Tuesday said the domestic energy industry has been calling for changes to the SPT for the last six years.

But he said: “I don’t think that it goes far enough. It is really going to give a marginal change in the attractiveness of investment opportunities.”

Ramnarine did not see the proposed SPT changes “exciting the industry to the point where people will want to invest.”

He believed energy companies “are now crunching the numbers to see how it will impact on the net present value of their future investments.”

He would have given a lot more than the changes proposed by Imbert.

“I think the minister needs to go a lot deeper with the changes in the SPT.”

Ramnarine added that SPT is focused on oil production and has no bearing on gas production. With a need for both oil and gas production to increase, Ramnarine was hoping to see a decrease in the royalty rate for natural gas.

“The changes that I heard (in the budget presentation)...really are geared towards oil production, because SPT is applied to the production of oil and condensate. We have a fundamental problem with natural gas production in TT.”

Ramnarine reiterated the need to look at the royalty rate applied to natural gas production. That rate is currently 12.5 per cent.

“Obviously that is a deterrent, because since it was introduced in 2017, natural gas production has only gone in one direction – which is down.”

He added that a sliding scale for the royalty rate for gas production may have been a better approach to take.

Touching on petroleum profits tax (PPT) being reduced from 30 to 35 per cent for deepwater production and exploration, Ramnarine said, “I don’t see how that makes any sense. We currently have no production of oil or gas from deepwater (acreages).

This is compounded, he continued, by Government’s not awarding any deepwater acreages to any company or consortium since 2014.

“I don’t really see that as having any material impact on anything at this point in time.”

Imbert said the proposed PPT decrease was aimed at incentivising crude oil production and “to sustain the current level of hydrocarbon reserves. “

He added that deepwater exploration costs are significant and the proposed PPT decrease will “increase and stimulate production.”

Arjoon said, “Despite the forecasts of the international agencies, it's too optimistic to peg the budget on an oil price of US$92.50 per barrel.”

On Monday, Imbert said, “Based on consideration of all forecasts by credible international organisations, our oil price assumption for 2023 will therefore be US$92.50 per barrel and our natural gas price assumption will be US$6 per mmtu.

But Arjoon commented, “Oil prices have started to fall, given the reduction in demand caused by multiple interest-rate hikes by the US and other economies.”

The US rate increase, Arjoon continued, strengthened the US dollar

“This, together with global inflation, caused an economic slowdown and reduced the pace of growth in merchandise trade, thereby causing oil prices to drop.”

Arjoon said the upcoming winter and the complete embargo on Russian oil by Europe, carded for December, might cause prices to go up.

But he added, “Again, this could be suppressed, if Russia continues to sell oil to Asia at a much-lowered price.”

Arjoon wondered whether Imbert chose to peg the budget on an oil price of US$92.50 per barrel “to limit the possibility of having to place excess petroleum revenue in the HSF (Heritage and Stabilisation Fund), which would be the case once prices stay in this vicinity.”

On proposed SPT changes mentioned by Imbert, Arjoon said, “It may also be the case that the lowering of the threshold for small producers for the SPT to take effect is to encourage them to increase production via enhanced oil-recovery projects in mature wells, which would otherwise not have the attention of the large producers, as the investment return for this might not likely be viable for them.”

He observed that recent bid rounds have not been very encouraging, suggesting that energy companies are not too pleased with the fiscal regime.

“Gas production is currently 27 per cent lower than production at the end of 2018, with little optimism for meaningful increases in the short to medium term. Our output is not adequate for the downstream producers and for the three trains at Atlantic LNG to run at near-full capacity.”

In such an environment, Arjoon said, “The incentives to the energy companies should have been more aggressive.”

He did not believe the five per cent decrease in PPT mentioned in Imbert’s budget presentation was adequate, “especially since much of our reserves are in deep-water, which to monetise requires significant capital expenditure by the upstream producers.

“They will have a required rate of return, as investment into deepwater exploration is a major investment decision, plus there are possibilities they could stumble upon dry holes. Therefore the return must compensate for the risk being taken.”

Arjoon said the proposed five per cent reduction in PPT is not likely to be sufficient, “unless the state was told by the upstreamers that the five per cent cut would push them over their hurdle rate.”

In the present low-production environment, Arjoon suggested Government “ought to discuss with the upstreamers what is the rate of return they require for bringing the gas production up to 4 bcf/d (billion cubic feet per day), to adequately meet the demands of the downstreamers and allow Atlantic LNG to operate at near full capacity.”

The Energy Chamber was pleased with fiscal measures in the budget relating to the energy sector, including the proposed changes to the SPT.

In a statement on Tuesday, it said, “The reductions in the SPT rates for new wells in marine fields and the extension and expansion of the changes introduced in 2020 for small onshore producers are welcomed and will help the economics of new investments in oil projects.”

The chamber had been calling for this change for over a decade.

“This change represents the first major adjustment for offshore oil producers. The changes will also help create greater investor interest in the on-going onshore bid round.”

The chamber welcomed Imbert’s commitment to meet with the oil and gas industry over the next three months to review further potential reforms to the fiscal regime.

The chamber also thanked Imbert for collaborating with it in making the changes he announced on Monday.