PARTNERS in life, love, business and employment Hollis and Shereen Bailey-Valdez were found murdered, face down, on the floor of their bedroom Friday morning.

Police were, up to late Friday evening, searching the forest of Rincon Village for the suspect.

According to police reports, at about 7.45 am, an anonymous caller contacted the Maracas Bay Police Station and reported hearing gunshots at Rincon Road, Las Cuevas. Officers responded to the call and found the couple dead. 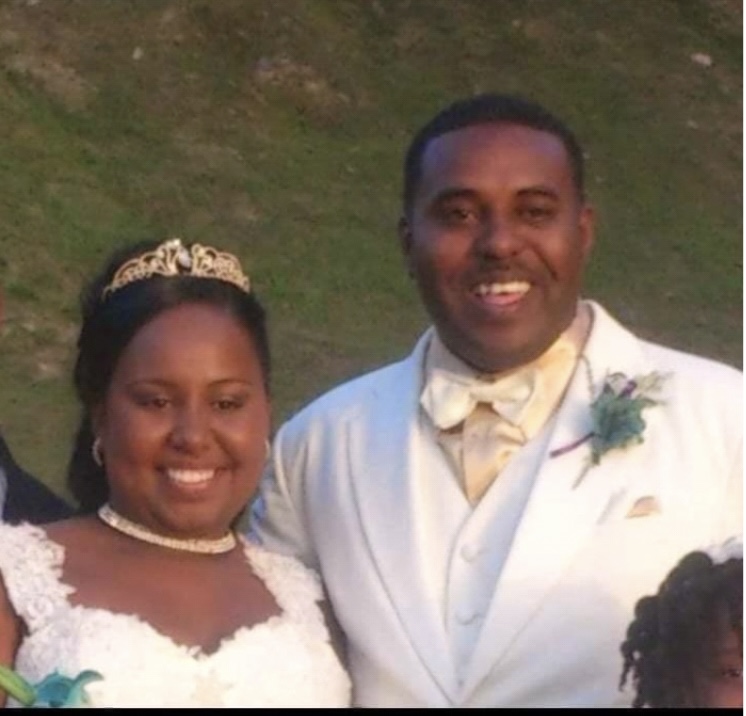 At the scene of the double killing, relatives of the couple said, apart from working together, they ran a bar at Las Cuevas. Valdez’s father Victor Valdez told the media that it was only a few days ago his son returned to his matrimonial home after just over a month separated.

“I and him were real close. They were married for about seven years now but together longer than that. When he left her he came by me, that was about over 6 weeks ago then some days ago he went back home.

Victor said after the funeral for 22-year-old Meshach Gibson who was killed in a shoot-out with police on July 19 at La Fillette, Blanchisseuse, the couple went home together and that was the last anyone saw them alive.

He said when he woke up on Friday he checked his son’s bedroom and did not see him and sometime after 8 am, a neighbour called to tell him what happened. He was thankful that the couple’s only child, a 14-year-old girl, was not at home when the killer came.

The couple had a rocky relationship as relatives claim Bailey-Valdez was in an on-and-off relationship with the suspect for some 13 years.

Friends of Bailey-Valdez said she was afraid to go to the police, but she was receiving death threats from the suspect who gave her four days to live earlier this week. Two weeks ago the suspect told his sister that he was going to kill Bailey-Valdez and himself.

After the killing, villagers say the man told one of Bailey-Valdez's cousins to tell everyone that he had killed her. Before the killing, he reportedly told another villager that he was going to do it.

A relative of Bailey-Valdez said she was aware of the threats and on numerous occasions asked her to seek help but Bailey-Valdez decided not to.

“I tried to reach out once or twice, but she was a very private person,” the woman said.

Relatives and residents expressed their anger at what they considered police inaction in giving the suspect ample time to escape after they failed to mount a search party for him. One man, who identified himself only as “Bafa,” said the supposed lack of concern was dangerous as the suspect could return to the village and kill more people.

“We want the Police Commissioner to know this is a real bad deal in Las Cuevas. Is seven hours now these people have been murdered. What going with the police? What going on with the army? What are we paying taxes for? We have no protection in our country, what going on?”

He called on National Security Minister Fitzgerald Hinds to intervene given that the couple were both lifeguards.

Bailey-Valdez’s colleague Mark Morton said he and other villagers went in search of the suspect in the forest but did not find the suspect’s body. He said the search was for his body after they were told that a single gun shot was heard in the forested area after the couple was found murdered.

Morton said, before going into the forest, the suspect dropped off food for his elderly father.

Newsday journeyed part of the way into the forest with police. The Nissan Xtrail could not make it up hill along the dirt road and Newsday had to abandon the police vehicle and continue the journey on foot. Police who managed to make it to where the suspect abandoned the car, warned to stay away from the parked vehicle as it could be dangerous since they could not say where the suspect was.

Suspects relatives: He is no monster

Speaking at the family’s Zorro Village, Las Cuevas home the suspect's sister said he was no monster and the only bad thing she could recall him ever doing was allegedly murdering the couple.

She said her brother visited a “spiritual man” about two weeks ago and was told that he was being used and it was then he first mentioned that he was going to kill Bailey-Valdez.

"He could not take it no more. He have a friend in Rincon and he told her everything.

She claimed that her brother spent well over $200,000 on Bailey-Valdez during the course of their relationship.

She said her brother was “used like a dog” and was kept on a leash with promises that the woman would leave her husband for him. She claimed even the husband knew of the affair but was a financial beneficiary.

The suspect's sister said her family repeatedly told him not to have any form of relationship with the woman but she kept calling and texting him and he would return to her, especially when he moved on with another woman.

“He said, what she did to him, she have to dead for what she do to him. Everybody in the village was laughing at him because everybody knew she was using him."

The suspect's mother, said it was her son’s $10,000 gift that allowed Bailey-Valdez to open the bar on the beach. The stage-two cancer patient said Bailey-Valdez would boast that anything she wanted she was getting from her son.

She said, after her son allegedly killed the couple, “I was sitting right here, he came, watched me in my face, turn around and drive away.”

The suspect's sister said he was love-struck since he was going to secondary school and finally got with Bailey-Valdez when he was around 21 years old “when he started to better himself.”

She recalled that, for Mother's Day, her brother was at Bailey-Valdez’s mother’s home showering them with gifts while his own mother was in hospital and he did not visit her.

The women said others would accuse them of saying these things just to support their relative, but they would only do so because they were unaware of the situation.

Even then, mother and daughter called on the suspect to surrender.

His emotional sister said: “You know your mother and sister love you. We know what you do was wrong but we know what you was going through. We want you to give up yourself and we will stand up with yuh. We love you more than anything else in this world and we can’t live without you.”