Google Lord Nelson and what immediately comes up is information on British vice admiral Horatio Nelson. Throwing so wide a digital net would do that. Specify the search and type in Lord Nelson Trinidad and random bits of information about the life of the great calypsonian comes up.

The vast bodies of information that one easily finds on Sparrow, Kitchener and any other calypsonian is not as readily available for the man who created distinctive hits like Stella, Disco Daddy, Meh Lover, The Scroll, King Liar and many others.

The Friends of Lord Nelson, a non-governmental organisation, is on a mission to correct this and to honour one of Trinidad and Tobago’s oldest, living entertainers. Righting this wrong will begin with A Musical Evening with Lord Nelson. The concert is being held under the patronage of the Prime Minister on July 30 at Queen’s Hall, St Ann’s.

Chair of the NGO John Arnold said it was formed in 2019 and is working to preserve the legendary calypsonian’s legacy.

“In forming that, our basic mandate was to now look at how we celebrate the life of Lord Nelson while he is alive,” Arnold said.

He said the concert was all planned last year but was delayed by the covid19 restrictions.

Preparation for the event began six months ago and Lord Nelson will perform at the concert along with guest performers.

“It is a tribute but it is also a tribute in him being able to perform. The whole second half is him. Guest artistes will do songs from his repertoire and do their interpretation of that,” Arnold said.

Some of the supporting artistes are Oscar B, Ronnie McIntosh and the Signal Hill Alumni Choir.

Part of the proceeds from the concert will be offered to Lord Nelson, Arnold said.

“I think too often we wait until people die to appreciate them. For me, my mother always said to me, ‘Tell me while I am alive.’”

At 91, he is also the oldest calypsonian that is performing, Arnold said. In 2019, he was presented with a Lifetime Achievement Award by Randy Glasgow Productions in collaboration with Brothers with Vision (BWV) Entertainment.

In a then Newsday article he said, "I, Robert Alphonso Nelson, born in Plymouth, Tobago… in the past they dubbed me a foreigner, said I wasn’t born here and all the competitions and awards here are for nationals.

“Arrow, Sparrow, Swallow, Church – all those people could have taken part and win now they’ve changed it over… it hurts me but in Tobago and more so in Trinidad and Tobago, stranger better that your own. But I’m back here and I’m raising hell from where it was,” he said.

Arnold said, “We are really talking about somebody who has been blessed by God in a very special way and still has something in him to give."

To Arnold, Lord Nelson has really been underrated.

“He has not been given his full dues. He has been one of the more powerful ambassadors of calypso and soca music outside. There is no doubt about that,” he said.

Lord Nelson was one of the best story tellers that he knows, Arnold added.

“He has a beef with the fact that he was called foreigner. That song Foreigner is a dear song to his heart because he really felt hurt when his song – I Going to Party Tonight – there was a kind of thing where they called him a foreigner.

In the 1978 song, Lord Nelson says he doesn’t mind being treated unkindly or people taking away what is his but he could not believe his countrymen calling him a foreigner.

“He was like, ‘I born in Tobago. I bounce meh toe. I do box cart. I grow up in Plymouth. How can they call me a foreigner?’” Arnold said.

In 2020, a two-part series was done on Lord Nelson and shown on The Friends of Lord Nelson’s social media pages.

Arnold said, “We want to set up where we can have competitions in schools which speak to the way he dresses. Why he performs like this? Why he composes like this? Where did he get those ideas for King Liar?”

He added he worked with the late Winston “Shadow” Bailey in the last year of his life and saw where a lot of those artistes feel like they did not receive their right due.

“My thing was we’ve got to make sure we see about these people,” he said.

Arnold said the Ministry of Tourism, Culture and the Arts through its former Minister Nyan Gadsby-Dolly was working on that and through current minister Randall Mitchell was now doing so.

He hopes this continues and bears fruit.

“All of us need to know that these people are the ones who paved the way. And I am really strong about paying tribute to while they are alive. I think it is so important.”

He urged the public to come out to not only celebrate Lord Nelson’s life but also celebrate with him performing. 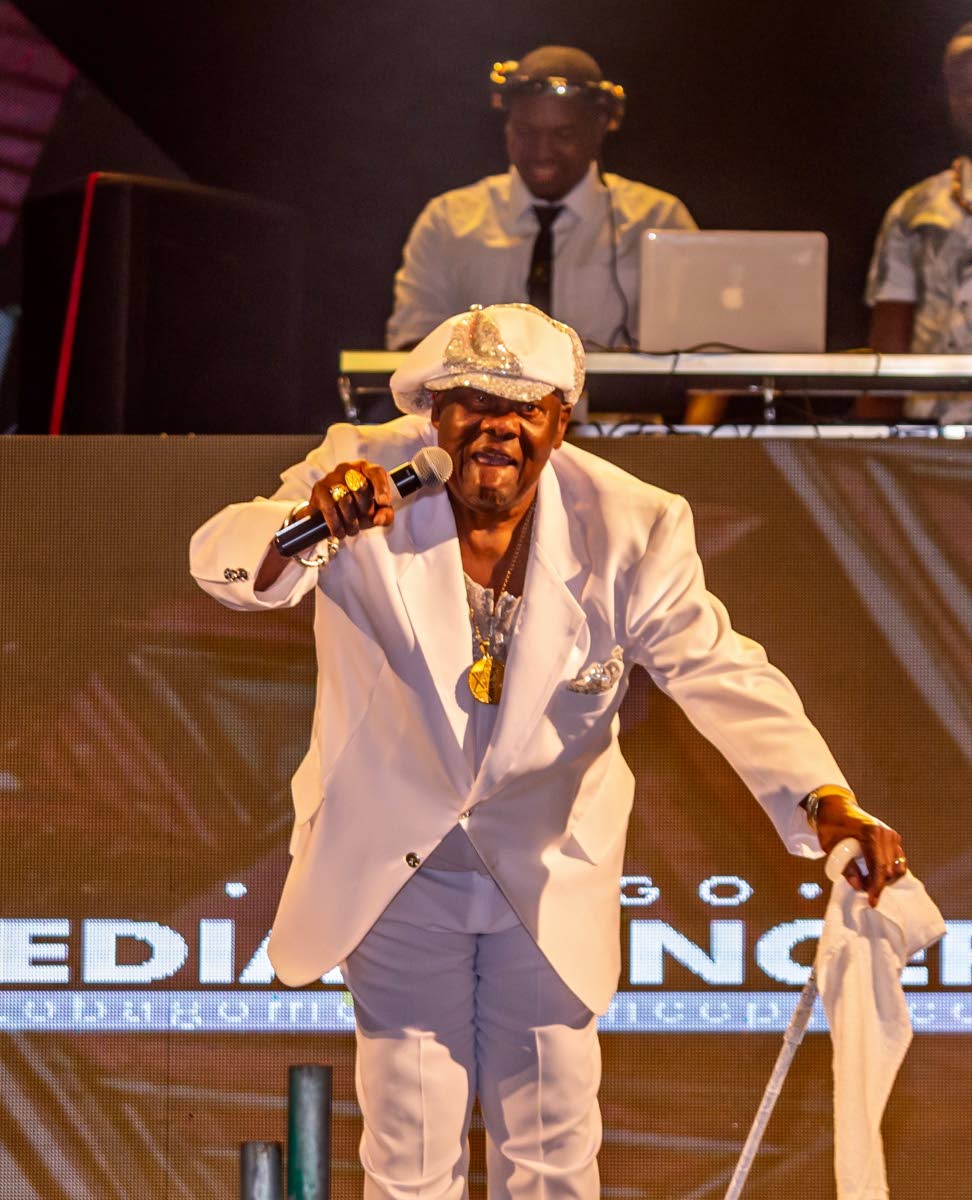