Because Trini to the Bone is an individual feature, all six members of Freetown Collective have appeared one by one, starting with Lou Lyons on June 30 and ending with Muhammad Muwakil on July 4.

My name is Muhammad Muwakil and I am the co-founder and one of six members of Freetown Collective. I am a lead singer, songwriter and guitarist.

I come from Belmont, Freetown, even though I only started living there about 17 years, half my life, ago.

Even though I had no idea what Belmont was, in my formative years it was feeding me.

I come from a huge family. My father has 11 siblings and 23 children.

I have a significant other.

I don’t have a family of my own in the usual sense. But I have a huge, amazing family we’ve built in the last ten years.

My father was part of the 1990 insurrection. And I had no idea what that meant.

Which goes to show that children can normalise anything. Because, to me, normal was waking up with the police breaking your door down, your father on the floor, police searching for guns. Every week!

It was a real clear understanding in my mind of the place I lived in and what it meant.

It was only when I came out into the world some 17 years later that I realised how different my upbringing had been.

I was six in 1990, when my father, as wazir of security of the Jamaat-al-Muslimeen, took part in the coup attempt. Really just a child.

I am only now realising how much I carry that experience. Because we were raised to be soldiers. In a really specific way, to know that there was this war between good and evil. And we were on the side of good.

And therefore our whole life was based around meeting that in a very physical way sometimes.

My friends’ earliest childhood memories were things like, “My father got a dog for me!” Or “We went to the beach!”

My earliest memory is my father sitting me down, when I was playing in the yard in front of the mosque at 1 Mucurapo Road. In one open palm he had a bullet, in the other, a little thin metal disc.

“Do you know what this is?” he asked.

Then he showed me the disc.

“And this,” he said, “is a bullet after it hits a wall. Are you as hard as a wall? No! So stop playing outside in front of the mosque at night!”

In recess, we would go in the yard and look for the bullet shells. Sometimes the shells would still be hot when you picked them up!

To us, as children, that was fun!. But I just try to picture, now, what the adults in the mosque must have thought.

I never got to meet Andre Tanker, but I know for sure that I’m in his lineage. If BC Pires tells me Andre Tanker made proud music but he was a most humble man, I say I would hope that Freetown is the same.

Some of the greatest singers of all time are not actually good singers.

Bob Marley never really belt a note in his life. Bob Dylan, neither.

I want to give a really special shout-out commendation and all my love to Glenda Collens, my voice trainer.

Over the pandemic, Glenda took me in hand, broke me in half and put me back together. Over five months. It felt like a rite of passage, like I came to a village and I met the elder I was supposed to meet.

How proud I felt to be a Trinidadian, because I had access to somebody like this rarity!

I was raised in a very militant Islam, about as militant as you can get.

But I don't think a single orthodox Muslim would endorse what I believe today.

I have always had a very strong sense in me that something placed me here and is walking with me.

But I refuse to form any solid ideas of what that thing we call God is.

I’ve been angry at God, I’ve cursed God but I’ve never doubted the existence of God. What I’ve doubted is the explanations given to me by men.

Most orthodox Muslims would not agree with me.

I have the utmost respect for people who take drugs. Mushrooms, LSD, MD – all of that! People call you a druggie, but you are peering into spaces the average person wouldn’t dare to, because they think they will destroy themselves.

And you, at the risk of losing yourself, you want to feel more than you would ever feel in this particular vibration. And you can't change it on your own, so you force this change, put a supercharge inside the engine and you going!

Damn, boy, I have
real respect for that!

The first song I ever remember hearing was Bob Marley's Rat Race. I was probably seven years old.

I didn't understand why a grown man was singing about rats. Same thing with Who the Cap Fits – why is this man singing about caps? I didn’t get it.

My parents had got married and divorced three times before they finally realised it wasn't making sense and split up for good.

I was too young to understand what was going on but I knew I was so sad! And I remember driving with my father in his car and hearing Tracy Chapman's song Fast Car. And I remember listening to that song and thinking, “Something is happening here and I don't know what it is.” And in a way, that stayed with me.

I bought a guitar and started making songs. I would make a CD and put it on in the car and my younger siblings would go, “Who’s that?”

And I would say, “That’s me!” I made copies for their mothers. And after a while, they started singing the songs.

I’m recalling that real vividly now: there was a place that I just couldn’t reach through just spoken word.

Poets live on a reservation. Poetry doesn't walk out in the road and meet you. But music would draft through the breeze to you.

If music was really the highest form of art, to add melody to my ability to write, this could be something very powerful. And I want to do that.

But I didn’t know how. Because I couldn't sing.

It's insane how I met Lou. I had been hosting a poetry show on the Avenue and I had seen the run of poets. And then this young guy walked in. He didn't have dreads at the time. And I was blown away by what he was saying on the mic.

After the show, we stood and talked to one another all night long. And then he disappeared.

For four years I never saw Lou again. And then I went to Tobago to perform. And someone walked up to me, took an Ethiopian cross on an ites, green and gold shoestring from around his neck and put it around mine. And stood in front of me, arms crossed, and watched me in the face.

And I would say we’ve been inseparable since that moment.

I get emotional remembering meeting Lou. I would literally cry.

It set this very strange standard for me in my life because you know what love is. You know what dedication is. To believe in something and to truly fight by somebody’s side, from scratch. And to have that person believe it as much as you.

I can’t explain what it is with him and I but we have agreed we have known each other throughout lifetimes. Fighting on a battlefield or onstage or whatever, there have been different variations of this. And we’re here now to do it again.

But now we have a wonderful shepherd. Our manager, Keron Niles and the team we have behind us. All them cats get tamed somehow.

I don’t envy anybody who had to do this (music thing) by themselves. I am a writer myself and I know writing is you staring into the abyss and pulling things out of it. An, on some level, I do have to stare down the abyss still, because I write all the choruses.

But when I do drag the chorus kicking and screaming out of the ether, I have somewhere to put it and someone to say, “That’s good. We can build something around that.”

The best think about Freetown Collective is knowing I’m in control of my own agenda and life. I don't have to clock in or check in with anybody.

There is nothing about Freetown that drags me down.

We are a family. We cuss. We stop talking. We fall out. Like any relationship.

You walk out of the security of a concrete house into a tornado. Because you tell yourself this tornado will lift me up where I want to go.

But while you’re in the belly of it, spiralling upward, piece of wood hit you in your head, you can’t see the other person ‘cause they’re dealing with their own s--t inside the tornado, and you find yourself alone, sometimes, when you made the choice to be together…

You catch a Trini drunk off his a-- in a bar and ask him the deepest philosophical question and he will give you an answer that will seem frivolous.

But on your way home, driving, that drunk’s answer will echo in your head: “Wait! What that man just say?”

And you will have to pull off the road and stop.

And that’s a Trini to me.

Trinidad and Tobago to me means the Trinitario cocoa! They buy it in this small amount and mix it with cocoa from the rest of the world because it is so potent. And so good. And it is enough to supply the world!

That is the height of what this place is: a spiritual wellspring. Trinidad and Tobago is probably one of the highest vibrating places on this planet! And I am
so happy to be born here. 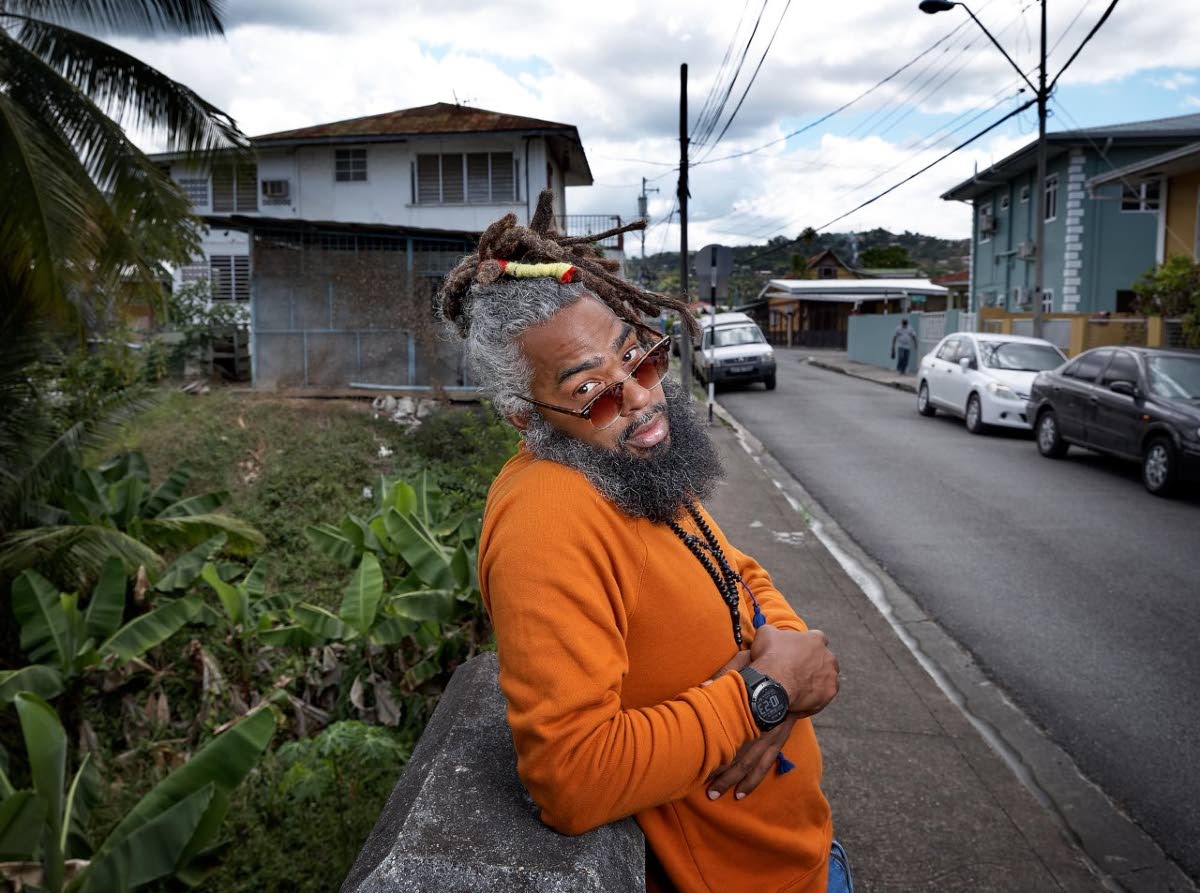 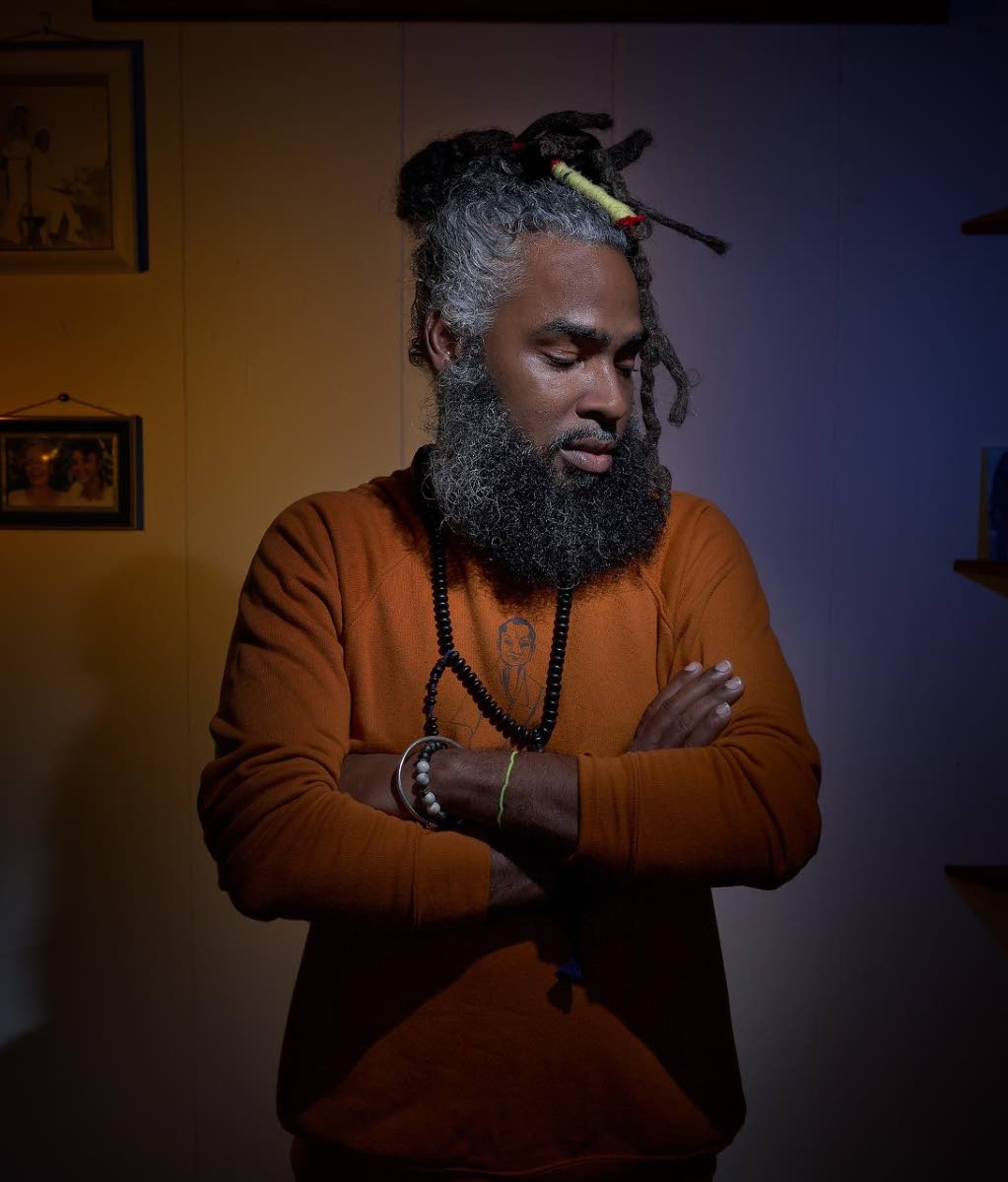