Design entrepreneur, children's author and educator Jeunnane Alkins says her love for beautiful things in the natural and built environments, such as plants and architecture, led her in the direction of a career in graphic design and storytelling during her teens.

Her curiosity about the things she admires is embodied in The Most Magnificent – a children's book she co-wrote with Neala Bhagwansingh.

"I wanted to teach about culture through stories, using material to which children can easily relate."

Alkins thinks there are many things with fascinating stories that people living in Trinidad and Tobago don't explore – things right before their eyes. The book is primarily for children, but she hopes it will also reawaken childhood wonder in adults.

The story is about the Magnificent Seven – the seven striking edifices built along the western side of the Queen's Park Savannah, Port of Spain, between 1902 and 1910, during the cocoa boom. They are now listed as national heritage sites. Queen's Royal College (QRC), Hayes Court, Mille Fleurs, Ambard's House/Roomor, Archbishop's House, Whitehall and Stollmeyer's Castle, through their varying architectural influences, say much about the history of TT and the nation's ancestors. For example, the range of their designs includes France, Germany and India.

QRC, the first along the strip when you're driving round the Savannah, embodies the German Renaissance style, while Ambard's House is a prime example of French Second Empire architecture, with its arches, dormer windows and cast-iron fretwork.

Alkins hopes children "can gain new information and immersive experiences through the story. We are taking what could be considered social studies or educational material and putting it into a format that is fun, engaging and feels a bit more like their cartoons and games."

Conversations span from when they were built, who built them and who lived in them throughout the decades – telling the story of these national monuments in a way Alkins believes will help children gain a greater appreciation of the built environment and its interconnectedness with history. She hopes the book will contribute to the youngest generations seeing the value in maintaining historic sites and monuments.

"The concept borrows from how children would decide who or what is the most magnificent. The things the houses argue about are similar to things children would argue about – their age, how they look, who is bigger than the other, what they people do – much like when children would say what their Mommy or Daddy does."

Asked about character development for the book, she said, "I came up with the concept and my co-author Neala Bhagwansingh was tasked with creating personalities for each building."

Alkins entered and was among the winners of the i2i competition initiated by the Ministry of Planning in 2014, which gave her a grant to help bring the concept to fruition. This let her create a team, which included Bhagwansingh, whose main responsibilities included research for accurate personality referencing.

Another team member was hired to do additional research on the buildings.

"We had like six-page dossiers on each building, gathering information from the national archives and content from anybody who wrote anything about the Magnificent Seven."

She said the National Trust also reviewed the content for accuracy and she consulted anyone who could provide extra information about the buildings, like producer Lorraine O'Connor, whose family lived in Mille Fleurs for over 50 years after her great-grandfather Joseph Salvatori bought it from the Prada family in 1920.

From start to finish, the project took seven years.

"We did a lot of research. To be fair, I put it down a few times. Then I was pushing to launch it in 2017, though I was not happy with the ending. Then my grandmother got sick and I took time to help take care of her until she died."

At this point, it was hard for Alkins to tell a story about ageing as a beautiful experience. She said the challenge was compounded by three of the seven being behind galvanise sheets for some time, being renovated after falling into disrepair.

She recalled "a lot of debate" on the renovations.

"Many saw it as a waste of funds, and I was torn because I thought about health facilities that also needed renovation – it was hard for me to find a positive end to the story."

It was not until 2021 that she revisited the project and felt ready to call it a wrap.

"I decided to spin the main theme of the story from being more about preserving our built heritage, but more so about recognising it and appreciating it."

At its core, Alkins said the book has to do with "celebrating differences, celebrating unique qualities that make each creation or person magnificent, celebrating the old while they are still with you, and recognising that old people weren't always old – they were children too."

Alkins has worked primarily as a graphic designer for 24 years, since she was 17, when her earliest skills were self-taught. She trained as a journalist at the Caribbean Institute of Media and Communication (CARIMAC) at UWI, Mona in Jamaica.

"I did multimedia, which is a bit of everything – writing, video and radio. My work is heavily on brand development, which I do through storytelling – to help clients clearly articulate what they do, which fed into my writing skills."

She was always artistic and did art throughout her time at St Joseph's Convent, Port of Spain. She gained experience that expanded her knowledge and interest in technology while spending time in the family business, which specialises in computer and printer sales and repairs.

"Once I started growing as a young artist, my skills on the computer developed – this led me in the direction of graphic design."

Then she got a chance to do a programme at Lonsdale Saatchi & Saatchi Advertising, "and others from people who saw my creativity from my younger years and indulged me, which helped me to grow. That and lots of trial and error."

"I did not have a design mentor per se. My first job was at Guardian Life, in the corporate communications department, and my then boss, Maria Macmillan, always believed in me. She has been a mentor my whole professional life and supports my work to this day. She was the first person to order The Most Magnificent."

Alkins hopes with time there will be a reform in how textbooks are created for children, where writers will take more of a storytelling approach that would make lessons more engaging.

"As a graphic designer, I see how storytellers set out to tell stories, so I don't see why the same can't be done for textbooks by design." 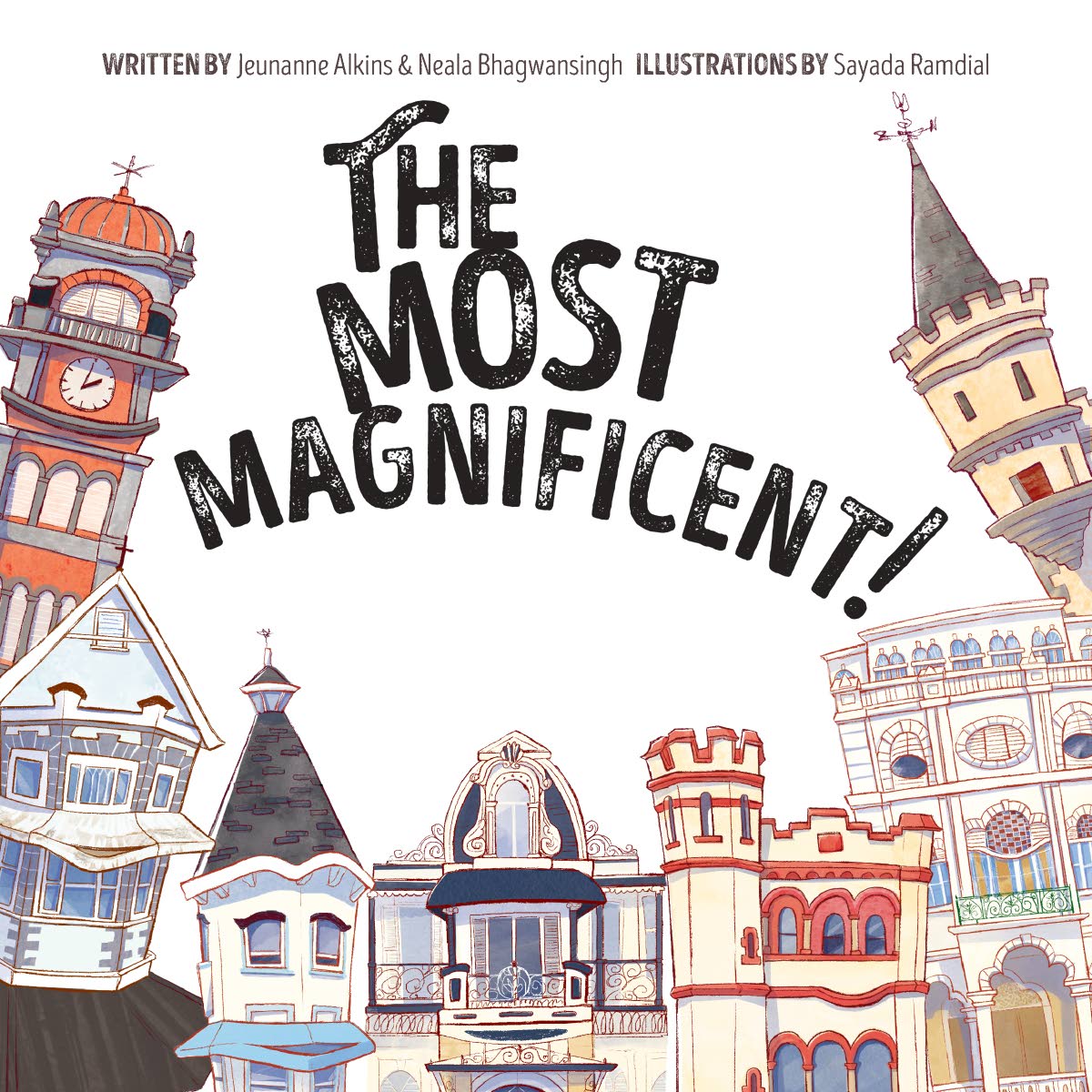