One of the new books launched at the 2022 Bocas Lit Fest is the anthology 100+ Voices for Miss Lou. The book brings together dozens of Jamaican and Caribbean writers and performers in tribute to the legendary Louise Bennett-Coverley (1919–2006).

Writer, cultural activist and gender specialist Opal Palmer Adisa, who edited the collection, said Bennett-Coverley, or Miss Lou as she is called, was a cultural icon, poet, performer, pantomime and extraordinary. She said reading and listening to Bennett-Coverley gave her permission to write in the Jamaican nation language.

“I say' Jamaican nation language' rather than 'patois,' which is what a lot of people call it erroneously, but I believe what Kamau Braithwaite said, that it is our nation language, it is our mother tongue.

“She said Jamaican women are tallawah, a word often attributed to our national heroine, Nanny of the Maroons. It’s a word that means 'small but mighty and strong' and in that poem she chronicles how women have to...in a sense (use) subterfuge to show and be as strong as we are.”

Palmer Adisa said Bennett-Coverley’s words, pantomime and poetry are relevant today not just for Jamaica but for the entire Caribbean. She said Miss Lou was familiar to many as she was part of the curriculum and would continue to be taught. She also inspired dub poetry through her use of language. 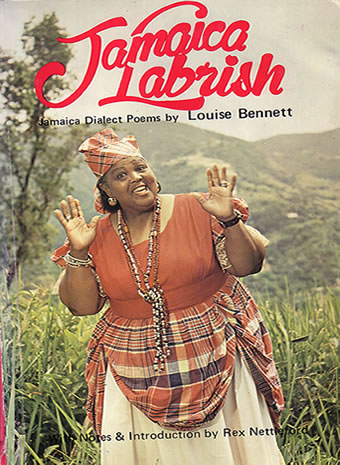 “Miss Lou was a cultural icon and a cultural activist and her poems really document what was happening in Jamaica specifically, but which reverberated throughout the Caribbean. So her relevance in validating who we are, our culture, how we think and how we move throughout the world is so important. She is really a voice for Jamaica, a voice for the Caribbean, a voice for the world, for people who should take pride in their culture, in their language, and big up themselves as we would say in Jamaica.”

The anthology comprises essays, poems, tributes, and interviews about, for and in honour of Miss Lou, including work by Palmer Adisa, Jamaica’s poet laureate Lorna Goodison, and former prime minister PJ Patterson.

Palmer Adisa said about the book, “In cultural preservation, in the culture of Jamaica and the Caribbean, this provides a document, and it’s a tribute to Louise Bennett, who fought for us to ensure that nation language is heard, recognised, and celebrated, and that who we are in our most ordinariness is a gift, is of value, is of fruit, and is of celebration.”