We live in the age of the personal brand, where some businesses – for better or for worse – are synonymous with their outspoken leaders.

What springs to mind when you read about the Virgin Group other than its charismatic founder Richard Branson? Or Tesla and its controversial CEO Elon Musk? Come across either of these figures and you’re immediately reminded of the companies they represent.

Generally speaking, accountancy seems light on personalities – and undoubtedly lacking in celebrities. And that means there’s an opportunity to be had. While it may not be appropriate or desirable to have a controversial individual at the head of your firm, there’s certainly room for a trusted voice to emerge.

The idea is this: stick your head above the parapet and offer an ahead-of-the-curve opinion that truly gets people thinking, and you’ll gain respect and followers for your efforts. Over time, you will also become sought after for your knowledge and expertise.

The best place for your people to build their personal brands is on social media, and particularly LinkedIn, where all sorts are jostling for attention. Why? Because people look to interact with people much more than with some anodyne company page – this is "social" media, after all.

To prove my point: the various companies in the Virgin Group have a combined 581,000 followers on LinkedIn, while Branson has over 19 million. Over on Twitter, Musk has 61 million followers to Tesla’s 11 million.

And it’s not just the behemoths. Software startup HubSpot has 625,000 followers on LinkedIn, while its founder Dharmesh Shah has more than a million. Pick any accountancy firm, and the sum total of its partners’ connections will surely thrash that firm’s follower count (or I’ll eat my hat).

But the power of personality extends beyond leaders. Encouraging employees at all levels to build their personal brands on social media networks can help expand your firm’s reach, particularly if they’re motivated to advocate for the business.

• To truly engage as a person of interest, first consider what ‘thought leadership’ ought to be. What it certainly isn’t is unthinking followership – you need to be prepared to take a stand.

• Be both consistent and powerful in your messaging. What do you stand for, what do you care about, and what needs to change?

• Consider how your personal and corporate brands will align. To avoid confusion, they shouldn’t conflict.

• Post regularly but not for the sake of it. Make a habit of being observant and taking a view.

• To build a strong corporate brand, focus on the differences in how you do what you do and why you do it. This will help you stand out in a competitive market where your rivals offer more or less the same services.

Content reaches 561 per cent further when it is shared by employees rather than by a business’s own social media channel, according to a 2017 employee advocacy impact study by the Marketing Advisory Network. That’s because, while the follower count for your business’s social media presence is crawling along, many of your employees will have amassed connections well into four figures.

But employees leave – it’s an obvious and inescapable drawback, particularly when your people are encouraged to be more visible. So although developing employees’ personal brands will certainly expand your firm’s reach, there are pitfalls in that approach. In the likely scenario that a well-respected personality leaves your firm, you’ll need a plan B – and that is your corporate brand.

To return to an earlier example, I might like what Shah has to say, but if his company has got its branding right, when I think "inbound marketing tools" or "CRM", I should think HubSpot. I should also associate a whole bunch of positive attributes with its product and customer service. That sort of linkage can be achieved only at a corporate-brand level.

Outside of social media, investing in a single brand – instead of multiple individuals – will enable you to build a far greater reach, and you won’t get stuck when an individual leaves.

So set about building a strong corporate brand now; it’s never too late. The goal is this: you want people to think of your company when they are in a buying situation. It’s a long game because this situation may occur years from now – only a small fraction of potential buyers are in the market at any one time.

Investing in the brand makes sense for firms because then they can make sure their brand speaks louder than any single employee or leader. 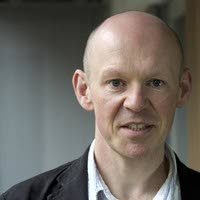