WEST Indies captain Kieron Pollard refrained from pointing fingers at opening batsman Lendl Simmons who soaked up deliveries in a painstakingly slow innings of 16 off 35 balls in an eight-wicket loss to South Africa in the International Cricket Council T20 World Cup in Dubai, United Arab Emirates, on Tuesday.

The defeat left the regional side winless and in deep trouble rooted at the bottom of Group One with just three matches remaining.

West Indies have now started the tournament with back-to-back losses after falling to England by six wickets in their opening match, on Saturday. In the opening match West Indies were dismissed for 55 in 14.2 overs.

West Indies will have to win their remaining three matches in the preliminary phase to have a chance of advancing to the semifinals.

The top teams in each of the two groups progress to the semifinals.

West Indies will play Sri Lanka, Bangladesh and Australia in their remaining matches.

West Indies scored a modest 143/8 in 20 overs batting first on Tuesday, before South Africa sealed the contest by getting to 144/2 in 18.2 overs.

Simmons laboured at the crease in contrast to his opening partner Evin Lewis. Lewis struck 56 off 35 balls with three fours and six sixes to lead the way. Simmons was dropped in the sixth over, perhaps unfortunately for the West Indies, with only four runs to his name.

“These things happen; yes, he (Simmons) got stuck,” Pollard said after the match.

Pollard added he will not “throw team-mates under the bus.”

Simmons, who did not hit any fours or sixes in his innings, was the third batsman dismissed in the 14th over. Pollard did not want to say Simmons was the reason why West Indies did not post a competitive total. “After six overs he was there and we wanted to bat a couple more overs without losing wickets, but having said that I am not going to sit here and pinpoint anybody. You are not going to get me here throwing my team-mates under the bus. At the end of the day, he was outside there trying to do a job for us.” West Indies lost wickets regularly in the closing overs, limping to 143/8. Pollard pitched in with 26 off 20 deliveries to help West Indies to a sub-par total.

“I thought it was a total disappointing batting effort in terms of not getting about 160-plus.”

West Indies have the worst net run rate (NRR) in the group and face an uphill task in turning their campaign around. Pollard said, “Before we think about the run rate I think we need to win first, so I think the main effort will be trying to win the games and trying to improve in our batting department.”

Pollard said West Indies were solid in the bowling and fielding department.

In reply, an 83-run unbroken second-wicket partnership between Rassie van der Dussen and Aiden Markram ensured South Africa earned their first win of the tournament after losing to Australia in the opening round.

Markram ended on 51 not out and van der Dussen ended on 43 not out. Markram’s knock came off 26 deliveries which included two fours and four sixes. Van der Russen was more patient in his approach hitting three fours in his 51-ball innings. Opener Reeza Hendricks, who replaced Quinton de Kock just before the match, scored 39 off 30 balls with four fours and one six.

De Kock withdrew from the match after deciding not to kneel in support of the Black Lives Matter movement. On Monday, Cricket South Africa decided to make it mandatory that all their players take a knee.

West Indies will face Bangladesh in their next match at 6 am, on Friday. 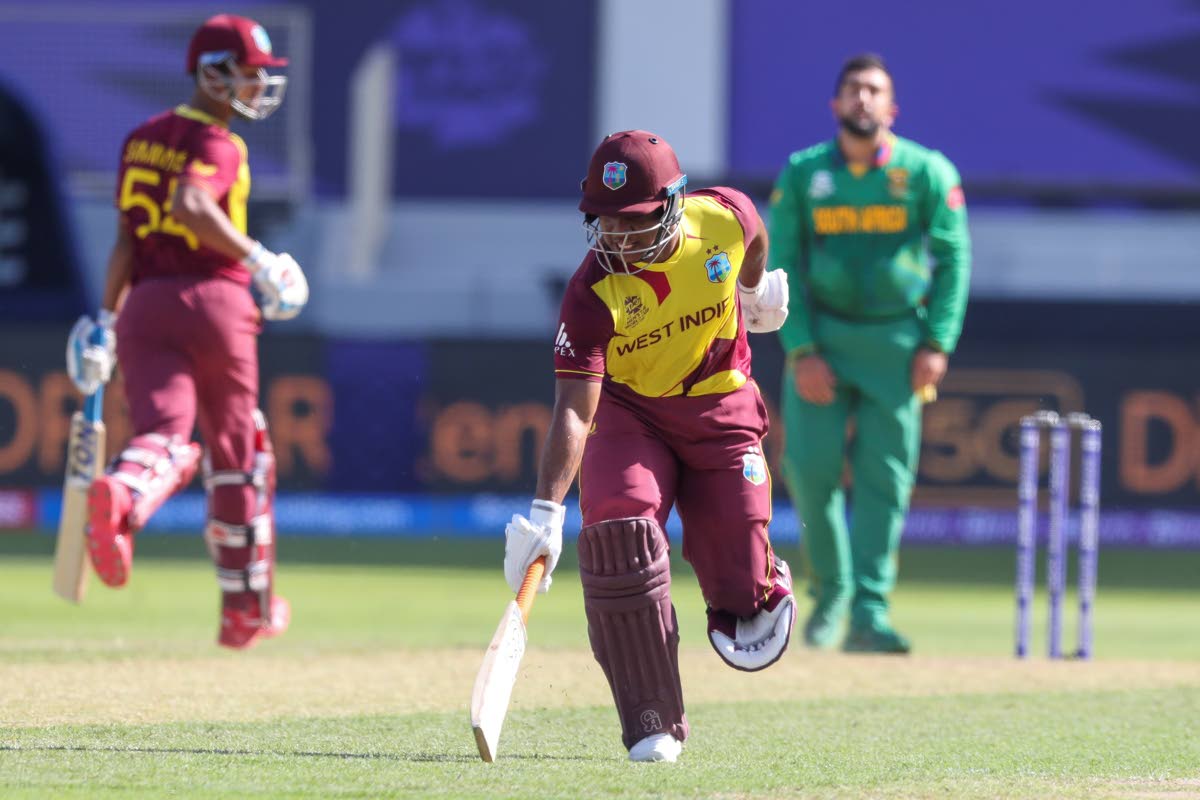