ENERGY Minister Stuart Young says although steps are being taken to reduce greenhouse gas emissions, like many other countries, Trinidad and Tobago will not be able to curtail its reliance on oil and gas in the short to medium term.

He said, "We are conscious of the need to monetise our known oil and gas reserves and to encourage exploration and development of our hydrocarbon resources, while taking steps to reduce the greenhouse gas emissions from such activity."

Young noted the event's theme – Recent Activity and Exploration Opportunities in Guyana, Suriname and TT – was "highly topical given the current position of the Caribbean as the hottest hydrocarbon province."

He spoke about the recent developments and exploration activities in TT's upstream oil and gas sector.

"TT occupies a unique position with mature provinces on land and in shallow water and with a frontier province in its deep-water acreage," Young said.

"We have been involved in the petroleum sector for over 100 years and during this period the hydrocarbon sector moved from an oil-dominant sector to a mostly natural-gas-based sector in the early 1990s.

"There has been considerable oil and gas exploration activity on land and in shallow water, resulting in a cumulative production totalling approximately 9.6 billion barrels of oil equivalent."

On the flip side, he noted TT's deepwater province has been left unexplored but for recent activities resulting in several discoveries which are currently being evaluated.

"Today, TT, like many hydrocarbon-producing countries, is at a critical juncture, given the global impetus to clean energy."

Nevertheless, he said, "Recent exploration activity has given a new lease on life to the hydrocarbon potential on both our land and shallow marine areas and has buoyed our expectations in our deepwater areas."

Advances in technology, he noted, have had positive impacts on this country's hydrocarbon exploration, including the use of 3D seismic imaging technology.

"(These discoveries) have been as a result of technological improvements in the industry and the inherent quality of TT as a world class hydrocarbon province," he said.

"This technology continues to evolve with the development of the ocean-bottom cable system, ocean bottom nodes and full waveform inversion technology for the acquisition of seismic data.

"These technologies are widely used in the domestic oil and gas industry with great success," he said, noting that their application has been crucial in identifying not only discoveries but the revision of reserves in existing fields, as well as enabling more accurate and efficient drilling campaigns.

Meanwhile, he said there have been positive results from the last onshore bid-round, in which 150,000 acres of state lands in Trinidad’s Southern Basin were offered for exploration.

He said Touchstone, one of the successful bidders, drilled several prospects – Coho, Cascadura and Chinook – in the Ortoire block, and all have been hydrocarbon discoveries.

"The Cascadura field, which is currently being appraised, has the potential to be the country’s largest onshore discovery in history," Young said, noting that the Cascadura and Chinook fields have both been tested for natural gas liquids and light sweet oil.

"The prospects for land exploration were promising, as the blocks were accompanied by a wealth of well and seismic data that reduced the risk and time of exploration, and were in a proven commercial hydrocarbon province within close proximity to existing infrastructure and producing fields.

"(As for) future oil production, state-owned Heritage Petroleum Co Ltd, which is the country’s largest oil producer, will be a key player.

"The company, which has exploration and production rights over 58,000 hectares onshore, primarily located in the prolific Southern Basin and in its offshore acreage in the west coast marine area, has the largest oil potential."

Young noted that BPTT’s Cassia C compression project in its south east coast marine block is due to come on stream in early 2022.

"It will enable BPTT to access and produce low pressure gas reserves from currently producing fields in the greater Cassia area, maximising recovery from these existing resources."

Young said the the platform will have a capacity of 1.2 billion standard cubic feet of gas per day.

"BPTT will also be bringing on stream in 2022 gas resources discovered offshore in the drilling of Savannah exploration well.

"The resources," he said, "will be developed as the Matapal gas project and production is estimated at 400 mmscf per day," said Young.

"Similarly, Shell will be bringing on stream its Colibri project, comprising Block 22 and NCMA 4 located on the north coast marine area of Trinidad in 2022 with an estimated production of 250 mmscf per day.

"Other upstream projects scheduled for 2022 include De Novo’s Zandolie project and phase one of the EOG Resources Osprey East project."

BPTT's Ginger, Cypre and Jasmine projects, Shell's Manatee field and BHP's northern deepwater blocks in its Calypso project have been established as having commercial potential and are awaiting the final investment decision (FID).

He said the Ministry of Energy and Energy Industries is working closely with the companies to achieve an early approval of the FID.

"Therefore, it is imperative that we proceed to expedite production of our hydrocarbon resources."

The ministry has programmed a series of bid rounds over the next year, which he said is designed to attract offers for exploration in acreage on land, in the shallow water marine area, and in TT's deepwater marine area.

"In this regard, TT is not singular," said Young.

Over the past year, he noted, licensing rounds were issued by 33 countries.

"It is reported that there are current plans by 16 countries, including TT, to launch new bid rounds predominantly in offshore acreage in 2021.

"The first bid round on offer will be in respect of the country’s deepwater province in the north eastern and eastern marine areas where the consortia of BHP and its partners have enjoyed exploration successes."

Eleven deepwater blocks are under consideration, eight of which have full to partial coverage of BHP’s 3D seismic survey shot in 2014/2015, Young said, as well as data from the exploration activities of BHP and partners in the last five years.

He said there is also an abundance of 2D and 3D seismic data acquired through multi-client arrangements and by upstream operators early in the deep-water initiative.

"This dataset, together with available well data, will aid in de-risking the blocks and thus identify the best suitable candidates for exploration.

The onshore bid round will be next, he said.

"Trinidad’s onshore acreage has generated a lot of interest following the recent successes by onshore operators such as Touchstone and Heritage.

"This bid round is scheduled to be launched at the end of 2021, immediately after the launch of our deep water bid round.

"Twelve blocks located in the country’s Central Range and Southern Basin are under consideration.

Young said within the onshore acreages, several seismic datasets, in both 2D and 3D, are available and will serve to de-risk the blocks.

The ministry is currently in a nomination period for the onshore bid round. Young said interested stakeholders are required to nominate the onshore blocks they are interested in.

"In accordance with our programme, the offshore shallow water bid round will be next," Young said.

The evaluation of the blocks, he added, is at the preliminary stage.

"From a regional perspective, the interest by major energy companies in the Caribbean has provided an opportunity to TT to share our experience in the energy sector with our Caribbean neighbours. With respect to Barbados and Grenada with whom we share common maritime boundaries, we have entered into preliminary discussions on the development of unitisation agreements for the exploitation of hydrocarbons reservoirs that extend beyond our respective maritime borders.

He said the country has also entered into bilateral agreements with Grenada, Barbados and Guyana for co-operation in the energy industry.

"TT is also poised to participate in the exploitation of hydrocarbon potential in the marine areas off the Guyanas," Young said, noting that the country is in the process of "defending our claim before the UN Commission on the Limits of the Continental Shelf for the extension of our maritime jurisdiction."

Granted success, it will see TT's maritime jurisdiction extended seawards to areas in close proximity to the Guyana-Suriname basin.

"While TT has taken the policy to optimise the exploration and development of its hydrocarbon resources, we are cognisant of our responsibility to reducing greenhouses gas emissions," Young said, referring to government's commitment to reducing carbon dioxide emissions by 103 million tonnes by 2030.

"To this end we are exploring carbon capture and sequestration strategies and the development of a hydrogen economy," Young said.

"We have also committed to the production of ten per cent of power generation by renewables.

"In this regard, we have sanctioned the country’s first major renewable initiative, a utility-scale solar-power project for which construction will commence in 2022."

He said the power from the solar project has the potential to be used in green projects, for example, "to produce green hydrogen as feedstock for ammonia production."

"However, the transition to renewable energy will take time and many countries will not be able to curtail their reliance on oil and gas in the short to medium term," he said.

"With oil and gas prices, and demand recovering to pre-pandemic levels, there has been a need for continued exploration until the long term plan for renewable energy has been established.

"Notwithstanding we must prepare for the change is seemingly inevitable." 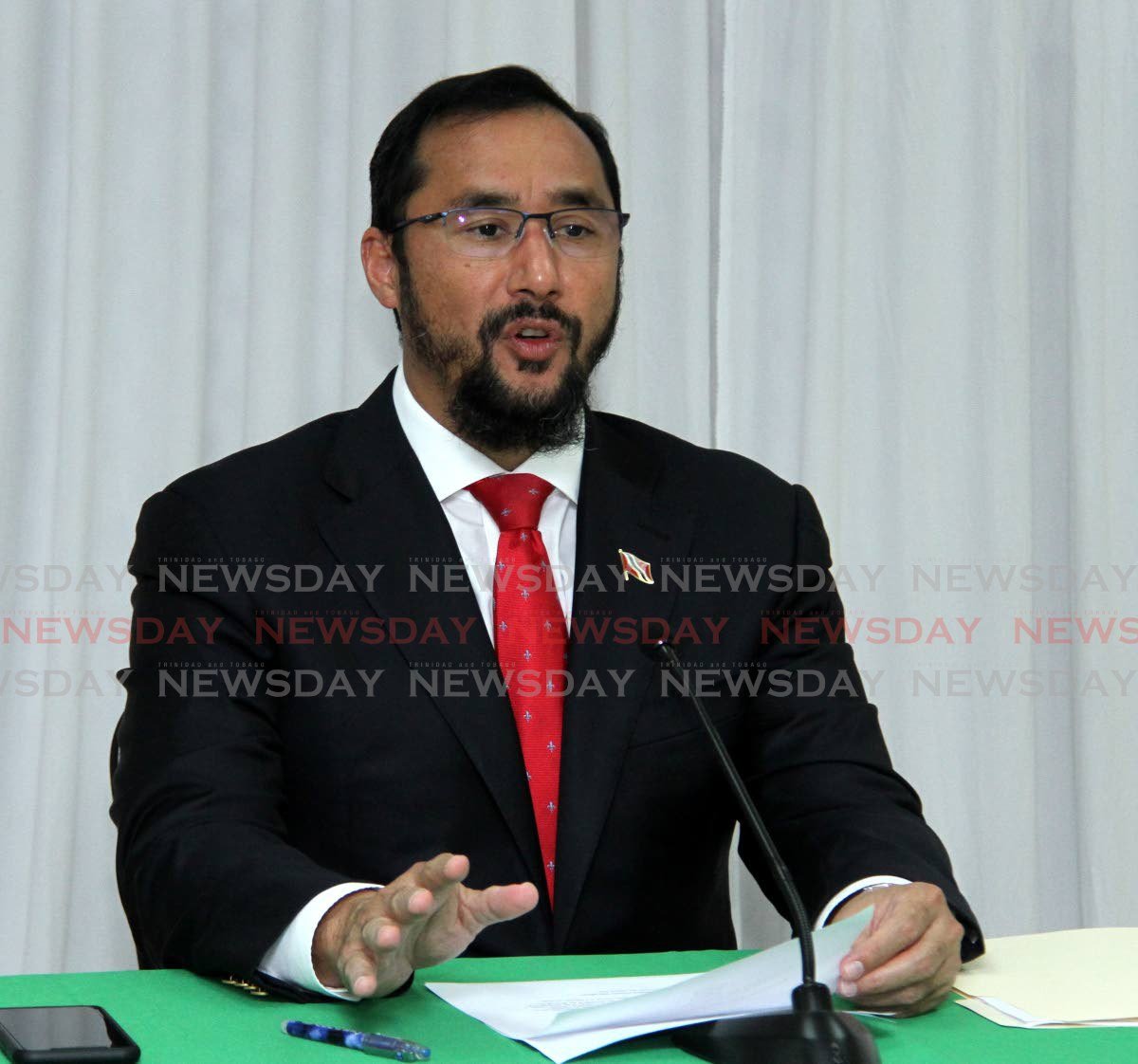