TRINIDAD AND Tobago wrapped up their disappointing campaign in Group F, of the 2022 FIFA World Cup Concacaf Zone, with a 2-0 victory over group winners St Kitts/Nevis, at the Felix Sanchez Stadium, Santo Domingo, Dominican Republic on Tuesday.

TT finished the five-team group in second place with eight points, one behind St Kitts/Nevis, with Puerto Rico (seven points), Guyana (three points) and Bahamas (one point) completing the group.

Midfielders Duane Muckette and captain Khaleem Hyland were on target for TT, as they looked to save face on the heels of their shock goalless draw away to the Bahamas on Saturday, a result which ended all hopes of qualifying for the World Cup in Qatar.

A soggy outfield caused both teams to adopt a cautious approach from the start.

TT tested the St Kitts/Nevis defence in the 16th minute when Muckette made a run on the right, inside the penalty box, and squared across the face of goal, but the ball struck the body of Judah Garcia and was cleared to safety by defender Lois Maynard.

On the half-hour mark, striker Ryan Telfer forced a decent save from Clifford Samuel, who started in place of captain and ex-W Connection goalkeeper Julani Archibald.

Another left-footed effort, five minutes later, from Muckette, broke the deadlock. The midfielder, from inside the penalty box, received a pass from Hyland and placed his shot beyond the outstretched left hand of Samuel.

Levi Garcia, who had an impressive showing on the right, drilled a left-footed shot against the crossbar, in the 59th.

Seven minutes later, the St Kitts/Nevis team were enraged after referee Randy Encarnacion, of the Dominican Republic, awarded a penalty after Samuel parried Levi Garcia’s shot onto the body of Maynard.

Encarnacion, after consulting with his fellow officials, decided to change his decision, with replays showing the ball struck Maynard’s left thigh and not his arm.

Hyland put the game beyond St Kitts/Nevis’ reach in the 74th, slipping the ball beyond the right of Samuel, after Levi Garcia’s ball from the right went through the legs of Maynard.

The match, with TT as the designated home team, was played in the Dominican Republic due to the TT government’s quarantine rules.

St Kitts/Nevis will now turn their focus to the home-and-away format, in the Concacaf Zone second round, scheduled for June 12 and 15, while TT will switch their attention towards the 2021 Concacaf Gold Cup, which will take place in the United States from July 10 to August 1. 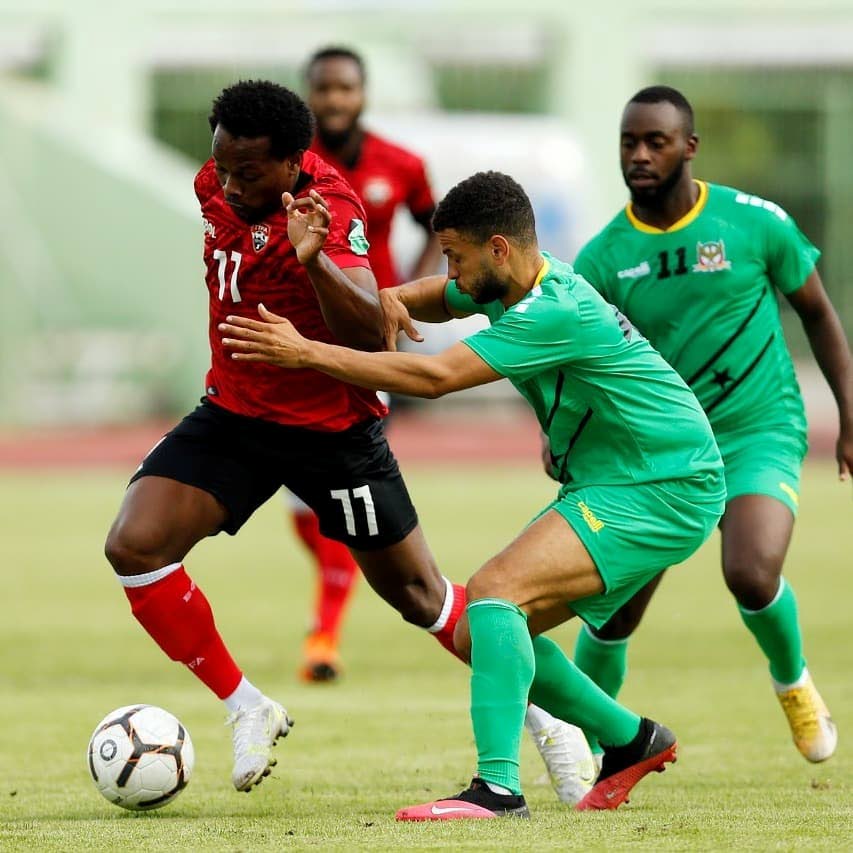