There are lots of stories and information on what it is like being a millennial. But information and stories are always more effective when told by a common voice.

Local entrepreneur and author Daniel Francis has adopted the task of documenting what it is like for local millennials through his books The Millennial Mind and the Millennial Experience.

He launched the self-published Millennial Experience: 30 Stories of Hope, Growth and Success on April 15.

Through stories, he tells what it is like for millennials.

Some of the stories are completely true while others tell of a theme or issue he wished to address.

Francis was featured in a Newsday article about his first book The Millennial Mind in August last year.

His second, The Millennial Experience, he began writing shortly after the publication of his first.

He said, “I actually did not start writing this book until about September and it took a little longer than the first book but I was done with everything by about mid-December.

“If I had continued writing every single day, I probably would have finished two or three books now...”

A press release about Francis and his books said his first book was a success – he sold 1,000 copies – and he took feedback from his readers to craft his second.

“The readers loved the short stories and lessons from the first book so I decided to write a book full of only stories surrounding the challenges and social issues we face as millennials,” the release quoted Francis as saying.

The book was also launched on Francis’ 30th birthday.

Francis also trains millennials as a personal development coach and over the past four years he has facilitated workshops, consultations, and programmes for hundreds of millennials.

When he wrote his first book, the content just happened to attract people his age, he said.

“And when I’ve looked at the work I have done, the people I have helped and the way I kind of put things forward, my main audience was millennial.

“As a millennial who has gone through all these many different hardships, it just makes sense for me to speak to this. I am not speaking from a point of, ‘I am this God from heaven speaking down to you.’ 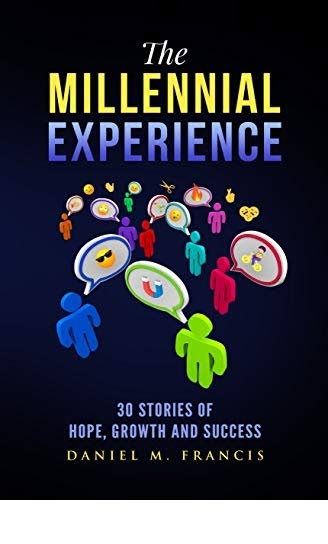 “I am speaking from the point of view, ‘I am right there with you in that struggle. I have learnt, I have lost and I have been stuck.’

“I have learnt on what has been working for me and I have seen it work for others when I train them so this is why I am doing it that way.”

His work around a common theme or topic is similar to other book series like Chicken Soup For the Soul. Book series like that did help inspire Francis’ work.

“So for the next book that I do, it will be more along the lines of self-help similar to the Millennial Mind but focusing on a specific area for millennials.

He even wants to surpass his target of 1,000 books sold and hopes to make that target in the first two to three months of his second book being out.

For the year, he hopes to sell 2,000 copies of The Millennial Experience.

Although Francis would one day like to see his book series become global, he is instead focusing on the local and regional market for now.

The Millennial Experience is available on Amazon and locally. For The Millennial Mind’s sales, 20 per cent came from Amazon. This was surprising to Francis since he expected the majority to come locally.

“But I have done my research on how the global landscape looks when it comes to books and for me to be able to really catch, I would have to keep putting out books.

“That is just how it works. You build a fandom, people see it, they look out for it on Amazon.

“If one book happens to catch fire and it is just rolling on Amazon and all of the other books that are connected to it then it will get caught up in that.”

He added that he believes that his success lies in focusing on TT, the Caribbean and then, once he is comfortable there, going “full 100” for the global side of it.

Francis has a wealth of ideas for his book series.

He said he has been jotting down “notes, ideas, chapter names and content for a bunch of book ideas.”

He has a document with at least seven book ideas and he already knows what he wants to write for his next two books. And it is going to be about millennials.

But apart from documenting the local millennial experience, he wants to focus on helping local authors self-publish.

“Ever since these first two books came out, every week it has been authors reaching out asking for advice.

He plans to host programmes, provide online guidebooks and do a video series as well.

“Just like I am a personal development coach, the goal is to eventually become a coach for authors as well.”

Francis has partnered with the local printer Office Authority. “From this partnership, I am able to take orders and deliver copies of my book directly to my customers easily and seamlessly,” he said in the release.