WHEN Carnival 2021 was cancelled, international mas maker Sudesh Ramsaran came up with the big idea of a miniature mas band.

Ramsaran created the band as a display for the Central Statistical Office (CSO), where he has worked as a statistical officer for the past 18 years.

The band was heavily inspired by the work of legendary mas maker Peter Minshall, crafted using his skills as a mas designer for two decades, and fuelled by his love for the festival, which began when he was a young boy in Sangre Chiquito.

In an interview with Newsday, Ramsaran recalled his first taste of Carnival was at four years old. He was a pupil at the Sangre Chiquito Presbyterian School and for that Carnival they all had to make their own costumes. He watched his mother take a piece of cardboard from the kitchen and make a mask. She also used other household items to fashion his costume.

"I was blown away by that."

Later, when he was on stage in costume with the other children he looked out at the sea of people watching and jumping up.

"It was the happiest thing to see."

Ramsaran's father used to play mas and was very big into pan and Carnival. He recalled feeding off his father's energy for the festival and wanting to emulate him. His father, an Agriculture Ministry driver, would bring Ramsaran and his siblings into Port of Spain to watch mas for the day and then pick them up after he finished work.

One of his earliest memories was seeing Minshall's Callaloo presentation in 1984. He recalled as a young child walking the streets and seeing the white, swirly costumes above him like clouds.

"It felt like heaven...(and) I was mesmerised a child."

Ramsaran recalled when he could not see the mas in person he would watch it on television from 8 am to 7 pm, breaking only to eat and use the bathroom.

"I got hooked on big mas immediately. I knew the mas designers' names. I was excited. I still live for Carnival."

As Ramsaran got older he wanted to play mas himself, but his father's promises of "next year" never materialised and his first mas experience came as an adult. It was 2001 and he was working as a clerical assistant at the Woodbrook Youth Facility, which was a corner away from the Barbarossa mas camp. Some of his friends were playing with the band and invited him to play with them.

When Ramsaran registered he asked if they needed any volunteers.

Two days later he was asked to come in – and he would spend the next three years working as a volunteer for Barbarossa for two weeks. He would always register for his costume first, though he would subsequently be given back the money because he was a volunteer.

"At the heart of it, I wanted to be a masquerader."

Ramsaran would leave Sangre Chiquito dressed as though he was going to work and would not tell anyone he was headed to the mas camp.

"There was nobody around apart from my father (who) loved the culture. Nobody I knew wanted to be a part of it like me.

In 2005 he left Barbarossa for Poison. But in 2006 when his "idol" Minshall came out with his presentation The Sacred Heart, Ramsaran forfeited his deposit with Poison.

"I left all my friends because I needed to fulfil dreams of playing with Minshall."

He had three friends trying to get him a place working at Minshall’s mas camp until finally one of them was successful.

"That was just a childhood dream come true."

After that, he discovered masman Brian MacFarlane, whom he described as "the next best thing." He explained that he always liked creative mas, as this was what he grew up seeing.

He worked with Mac Farlane from 2007-2013 but then decided he had had enough of mas-camp life. He explained it was very hard having to go to work and then work very long hours at the mas camp. He was also discouraged as he would be surrounded by people who were not like-minded.

"There were a few specialists, but generally the camp was becoming filled with unemployed or people looking for a job. They would drag their foot to try to make more money. This is not what I was here for."

Ramsaran decided that anyone who would want him to make mas costumes would have to come to him, and he "put it in the universe". Mas band Fantasy apparently heard his offer and they asked him to work as a subcontractor. The band would drop off the prototypes, he would make them from the comfort of his home, and then band representatives would come and inspect his work. He worked with Fantasy for two years and Bliss for two years after that.

Four years ago, Ramsaran began publishing his work on social media and international Carnival representatives started to take notice. He received a call from Bermuda and the officials asked him to work with them. He would also get calls for work with Toronto, and St Kitts carnivals. 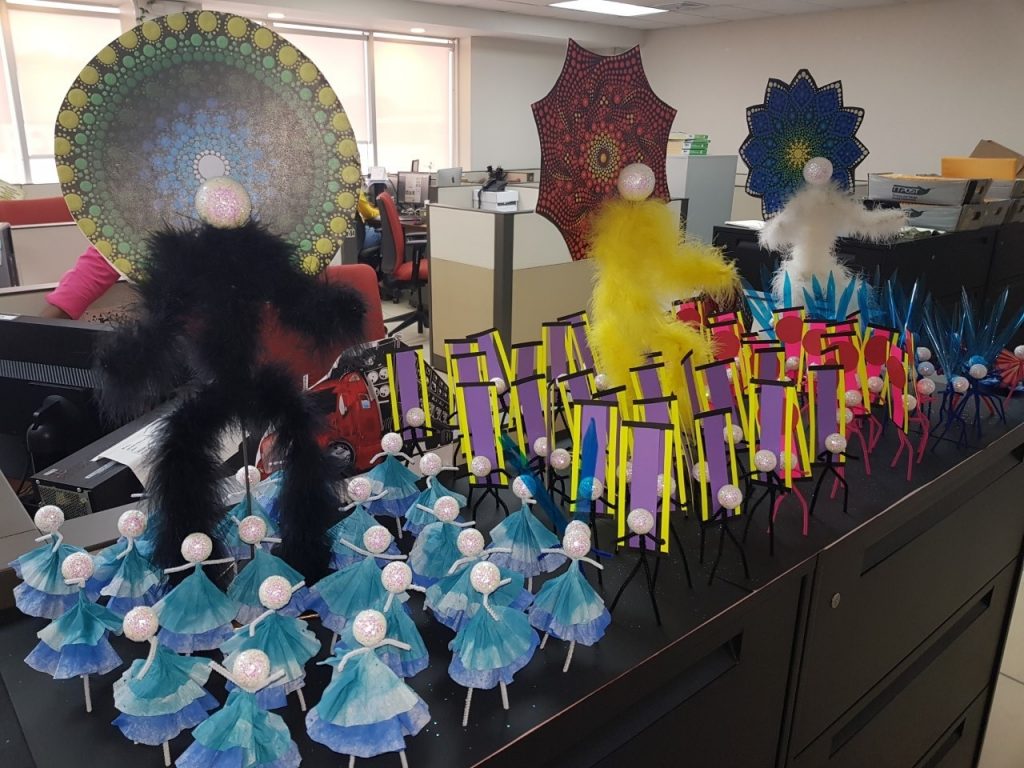 "When it comes to mas production I do TT Carnival in February, Bermuda Carnival in June, Toronto Carnival in August, and St Kitts Carnival in December. I became an all-year-round mas maker. It was something I never imagined for myself. People fly me up and pay the figure I call. I am living a dream I never believed."

But his year-round Carnival work came to a screeching halt with the pandemic and the cancellation of carnivals.

"I was devastated. I was genuinely looking forward to it."

Ramsaran recalled when there was the first lockdown he thought it would last just for a couple of months. In April last year, he was working on prototypes in Toronto and returned when the borders were still open for nationals alone. He thought he would lose out on 2020 but would have a better year in 2021, starting with Trinidad Carnival.

"When the Prime Minister announced (no Carnival for 2021) I went into a depression. All the carnivals for the entire year had already been taken away."

Ramsaran said he was distraught at the news.

"Being involved in creativity really feeds my soul."

At that point, Ramsaran decided he had been making mas for 20 years and he would not let covid19 take that away from him. He came up with the plan to do an entire band – but in miniature. He had previously done a miniature display for his office nine years ago, but this would be on a much grander scale.

He asked his boss at CSO and received permission to do a display. He then began doing his research and decided to incorporate several Minshall references, including River (1983), Carnival is Colour (1987), Carnival of the Sea (1979), and Papillon (1982). He explained each section was different and the bigger costumes were in the style of king and queen of the band, Tan Tan and Saga Boy, for 1990's Tantana, with some influences of 1988's Jumbie.

Ramsaran said his co-workers were ecstatic about the display, which was taken down after Carnival. But the miniature band was insufficient to satisfy his creative soul.

He then came up with the idea of making his own costume for Carnival Tuesday and taking pictures as if there was a parade. He did want a "cliche feather costume" but something unique, so the week before Carnival, he rushed to a wirebender friend. He then extended his plans to include a Monday costume and a blue-devil look for a J'Ouvert costume.

For the blue-devil costume, he utilised his talents as an international make-up artist to contour his face and highlight different shades of blue. He awoke at 5 am and put on the paint and had a friend come and take pictures. He similarly took and posted photos for Carnival Monday and Tuesday.

"I needed to do this to satisfy my soul and it was. I missed being on the road and around friends and the big truck and parade. Let it not be said I missed a Carnival."

Ramsaran said the reaction online was overwhelming. He recalled on Carnival Tuesday some children saw him as his photographer/videographer (who was masked) took images and video.

"They gasped when they saw my Tuesday costume. They said, 'Oh my gosh, look a dragon.' They loved it."

Ramsaran is looking forward to the return to normality and a restart of both international and local carnivals.

"I am very optimistic and hopeful that we will be able to congregate once more."