There have been more calls from various sectors of the public for government’s immediate intervention in the FSO Nabarima, the Venezuelan oil tanker in the Gulf of Paria.

The ship, which suffered damage early in September, has prompted mitigation measures by both TT and Venezuelan governments, On Friday the Ministry of Caricom and Foreign Affairs said it was trying to send a team of local experts aboard the ship to determine its condition.

It said in a media release that informal diplomatic messages were being exchanged consistently, with the Venezuelan government assuring that the vessel had been stabilised.

TT was, however, making persistent efforts to achieve and access the vessel in order to make its own determination.

But there were hiccups in getting the local team there.

Minister Dr Amery Browne said,“The Venezuelan government agreed to permit a team of our experts to cross the border and assess the Nabarima, but subsequently shifted from an initial position that this could be done by the end of September to their current position that the inspection team would receive permission to visit on October 20.

“Without such permission, our officers cannot cross the border and approach or access any Venezuelan asset.”

The Venezuelan media house
El Nacional said the issue was raised again at a Commission on Environment, Natural Resources and Climate Change of the National Assembly on Sunday.

The commission’s president María Gabriela Hernández Del Castillo said correspondence was sent to all parties associated with the ship to act to prevent a disaster.

He said despite US sanctions against Venezuela, the oil had to be transferred and posedh a great risk for the country and the Caribbean.

“We speak of one of the richest areas of biodiversity in the world. Now the cheap excuse is that because of the sanctions ENI cannot remove the oil, do not be irresponsible and remove that threat to our natural spaces from there.”

The US embassy on Friday said that the US-Venezuela sanctions were not designed to target activities addressing safety, environmental, or humanitarian concerns.

It noted that, “We strongly support immediate actions to bring the Nabarima up to international safety standards and avoid possible environmental harm, which could negatively impact not only the Venezuelan people but also those in nearby countries. 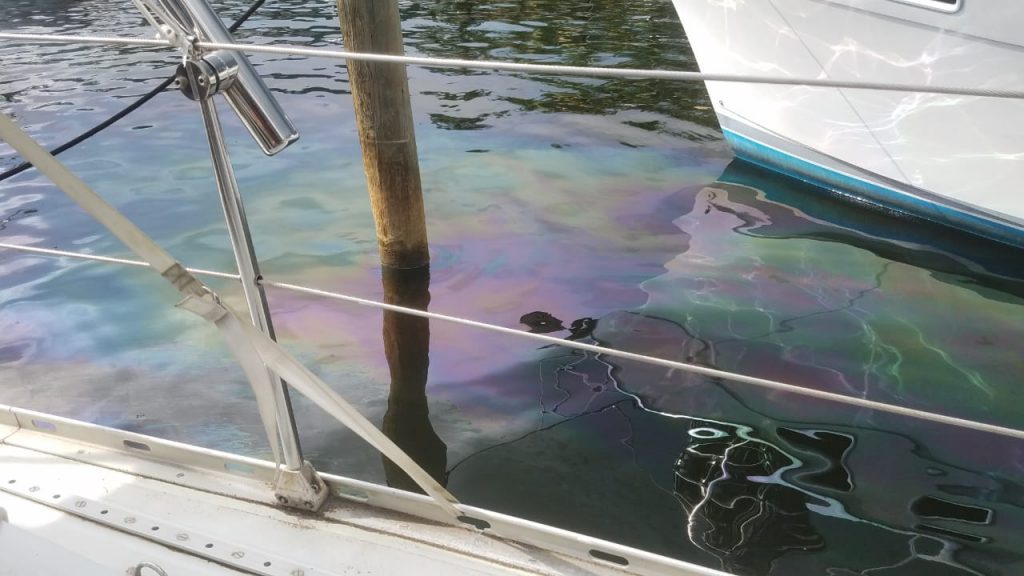 “PdVSA (the Venezuelan stat oil company) has a responsibility to take action to avoid an environmental disaster in Venezuelan waters. These activities to avert an ecological disaster are consistent with US policy to support the Venezuelan people and avoid further harm to the environment.”

While photos purported to be of the Nabarima circulated online, depicting the ship in a bad state, the release from the ministry of Caricom and Foreign Affairs on Friday said the photos were fake.

It said, “The Venezuelan ambassador categorically described a new photograph being locally circulated on social media, which purports to represent severe tilting of the Nabarima in October, as total propaganda.

“He has claimed that the photograph was actually taken over one month ago before the stabilisation work was done on the vessel, and that it is now being held up as a current photo in an effort to misleading.”

On Monday morning activist group Fishermen and Friends of the Sea (FFOS) confirmed that the Nabarima had been temporarily stabilised.

It said, “It appears from the enclosed unverified photos that the FSO Nabarima is no longer leaning/listing dangerously on the starboard but is floating upright at sea level.

“We are informed that over the weekend, the water that was seeping into the bow and ballast tank was pumped out.”

FFOS said this short-term measure was insufficient and more needed to be done immediately.

It urged, “Whether this impending disaster was provoked or not, this is a temporary relief and more needs to be done! The structural integrity of the FSO Nabarima is compromised, (and) all the oil must be transferred to eliminate any chance of spillage and environmental decimation of our shared Gulf of Paria.

It said the ship had been anchored there for 15 years "and has not been maintained in the past three years."

The FFOS Nabarima has been permanently anchored between TT and Venezuela in the Gulf of Paria with almost 1.3 million barrels of crude on board.

Also echoing concern was Caroni Bird Sanctuary tour operator Lester Nanan, who said the impact of an oil spill would affect not only the marine environment, but livelihoods as well.

He said, “In addition to destroying the ecosystem, the sea food harvested would be inedible for decades...

“The impact of this environmental disaster would also affect the economy: the food industry, tourism etc.

"Nanan Caroni Bird Sanctuary Tours is appealing to our government to assess the situation with haste and act swiftly.”