An imam has called on the Muslim community to step up to stem the tide of murders in TT, especially domestic killings.

Imam Abdul Haqq made the call for people to not turn a blind eye to domestic violence as he performed the last rites for murder victim Sherian Huggins.

Huggins was chopped to death by her estranged husband, in front of her children, at their home in Dan Kelly, Port of Spain, on Wednesday. Her young son tried to save her life but was pushed aside by her killer, Kevon Harris.

Harris then died by suicide. His body was found in Woodford Square, hours after Huggins' murder.

On Saturday, Haqq urged mourners at Huggins' funeral at the Masjid ul Furqan mosque, Picton Hill, Laventille, "We have to break a stigma in this community, a characteristic that is embedded in we up here, that whenever we see instances of domestic abuse, we does say, 'That is man and woman thing, that's husband and wife thing.'

"We have to stop that. We have to know that if men hitting their wife or their girls or their friends, we have to take a serious stance and deal with that problem, because one thing does always lead to another."

Haqq called on men to defend and keep women safe.

"It ain't have no 'bigger man' or 'badder man' when it comes to the rights of the sisters. For too long they being abused, whether it be physically or mentally, and it taking a toll on them."

He also said he grieves daily for his mother and brother, who were gunned down a year ago.

"It not easy losing a mother. My mother was killed, next month would make it a year, and my brother at the same time, gunned down, and I haven't recovered from that as yet, and I'm almost 36 years."

Haqq said many of those who killed were young men, and to save youths from the path to crime, the community must do more to help them when they are young.

"Teach these youths the right thing. Be there for them, whether it be financially and, most important psychologically, emotionally...Talk to them fellas and them."

Haqq highlighted how the culture of "tough love" towards men plays a part in fuelling violent reactions in relationships.

But he said there must be limits to this. He urged people not to continue taunting others who may be having marital or relationship problems.

"If we see a brother or a sister going through something, what will it take for us to stop gossiping and spreading rumours and doing things that would not help the situation?"

Haqq called on members of the community to support each other instead by offering comfort and sound advice.

"Just call the brother or sister and reason with them, even though they might not want to tell us their problem. Still let them know that it have a Lord. (Tell them) he sees and he hears, talk to him and he will help you – rather than just being not compassionate and seeing somebody going in a downward spiral and just trampling on them."

There was a heavy female presence at the funeral as the women of the community came out to say their final goodbyes to Huggins.

She was buried at the Tunapuna Public Cemetery.

– with reporting by Vidya Thurab 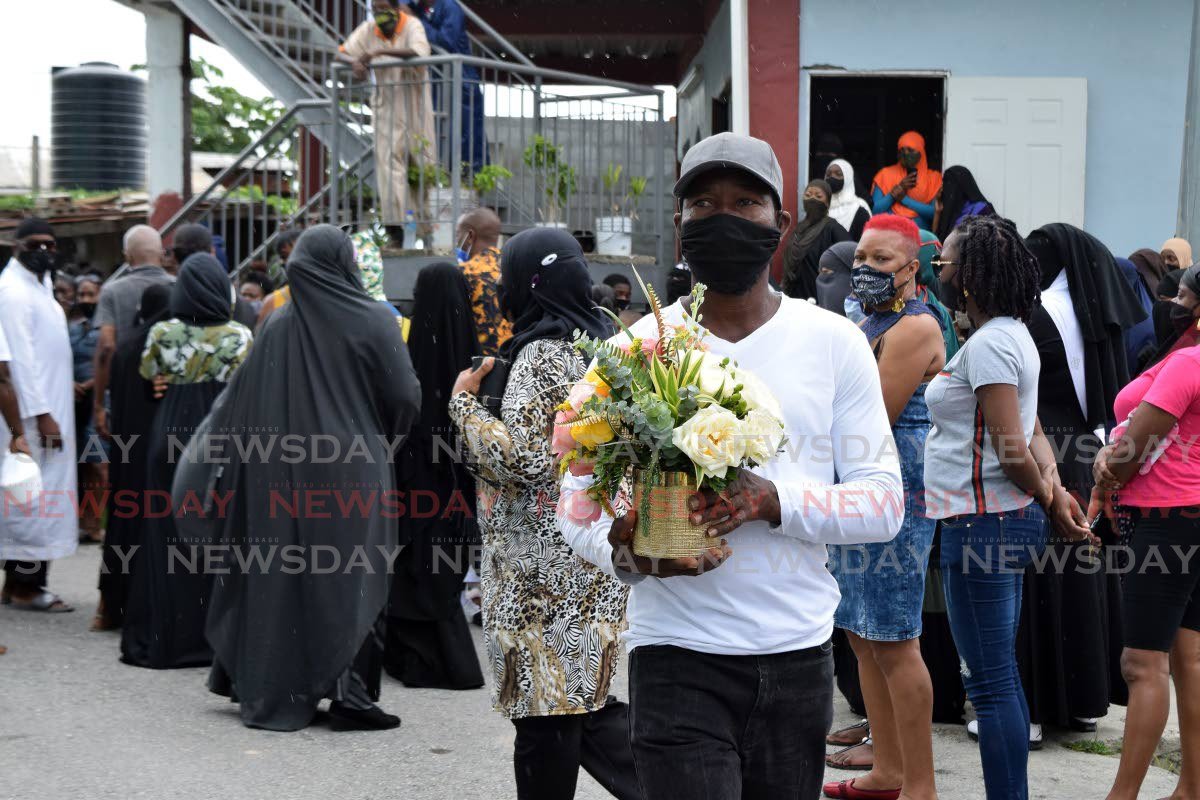