Security guards at the San Fernando General Hospital on Wednesday clashed with media workers who reported to police that the guards assaulted them near the public car park.

The drama unfolded around midday when media people began taking footage of a "viral tent" in light of unconfirmed reports of new cases of covid19 at the hospital.

In a statement from the executive of the Media Association of TT (MATT), it said assaults on journalists by Amalgamated Security Services Ltd (ASSL) officers at the hospital are not new. MATT, individual journalists and media houses have over the years, it said, repeatedly urged officials at the hospital to address the abusive behaviour of their security staff.

The "evident failure" to do so, it said, resulted in injury to TV6's south bureau journalist Cindy Raghubar-Teekersingh, damage to media equipment and another encroachment on press freedom in these dire times. It has occasioned unnecessary public health risks to both journalists and security personnel.

The incident happened about an hour after the Health Ministry again instructed the public to adhere strictly to isolation protocols during the covid19 pandemic. The release said the security aggressively flouted those directives for physically and verbally assaulting news media personnel.

"In footage captured by the media, two security officers are seen shouting into the faces of journalists and physically manhandling them, despite the entreaties of the journalists who were backing away to ‘stay away.’"

The statement further said, "Journalists, like everyone else, want to be with their families yet each day perform their duties bravely and courageously, with the full understanding that their work of bringing information to the public is especially essential to the public good in these times."

The association insists that all security personnel respect the right of journalists to bring news to an "anxious population." This is a new time, it said, that will not be successfully navigated with old behaviours.

The association is calling on the South West Regional Health Authority (SWRHA) and the police to investigate it swiftly and forcefully. This is to signal to the population zero tolerance for breaches of official isolation protocols and assaults on the flow of information to the public.

Raghubar-Teekersingh told reporters that before the incident, she contacted SWRHA officials about filming outside the hospital and not inside any wards.

"One aggressive security came up to us and said we cannot record. I told him we got permission, but he said he did not care. He and others said we needed to get off and they started pushing away our cameras."

Two cameramen, Ivan Toolsie, from CNC 3 and Che Teekersingh from TTT, were also in the car park.

"We told them not to touch our cameras. One was talking loudly. Another came saying he could have us arrested. One left us and went for a baton. He came back and was raising it in front of the camera person and threatening him."

Raghubar-Teekersingh said she started to record the exchange. At that point, a female guard came up to her, pushed her camera and tightly grabbed her hand.

"She grabs my other hand and rings it, almost like a chokehold. It was when people decided to record it, she let go. I am traumatised. I have never been accosted before by anyone. I was just doing my job.

"I did everything right and yet these officers were so aggressive both verbally and physically towards us."

Toolsie, in an interview at the hospital, said he heard that "patients" were brought to the hospital and staff were evacuating people. As he was coming out of a car, a guard grabbed his camera and held on to his hands.

"A guy with baton came and started making sarcastic remarks that this is his compound. I kept saying this is a public area."

Teekersingh said during the commotion a passer-by told a security to stop attacking media personnel. The guard told the man to leave, he said.

"He was hitting my camera lens with a baton. He kept saying he does not care about freedom of the press. This incident was uncalled for. For years, this has always been a problem. Staff said we could be on the compound, but it seems the security does not know that."

SWRHA, in a media release said it took note of the incident.

"SWRHA has immediately commenced an investigation to understand the circumstances which led to the unfortunate incident and determine the appropriate and necessary course of action to follow."

The authority regretted the incident occurred and confirmed its commitment to respect for the freedom of the press.

"SWRHA underscores the importance of and thanks the media for their continued support and co-operation as we seek to respond to the global pandemic."

ASSL’s group marketing manager, Robert Baur, in a release accused the media personnel of violating policies at the hospital.

It is disheartening that reporters seemingly cannot accept and support the fact that security officers and estate constables (ECs) are members of essential services that are so desperately needed during these challenging times, Baur said.

“After all, nerves are on edge and emotions heightened, but undoubtedly all service members are trying their best, and the more we all co-operate, the more we as a nation will achieve.”

The ECs have been temporarily removed from their post, while an internal investigation is being conducted to review “their execution of duty.”

Baur said about 1.15 pm on Wednesday, the estate constable stationed at the gate to the accident and emergency department observed a group of then unidentified people taking video recordings of the area and trying to gain further access.

Taking photos and videos are strictly prohibited in this area to protect the privacy of patients, he said.

The officer alerted an officer of SWRHA who approached the group and unsuccessfully tried to stop them from video recording and an argument erupted.

The officer, he said, tried to reason with the group who identified themselves as media personnel.

“She (the officer) highlighted that the person the reporters pretended to have an appointment with, is no longer employed with the SWRHA, and therefore their claim is misrepresentative (sic). However, the media individuals continued to violate existing policies of the SFGH,” Baur said.

In response, the EC supported by a male colleague, he said, proceeded to reinforce their standing orders as issued by the security department of the SFGH. 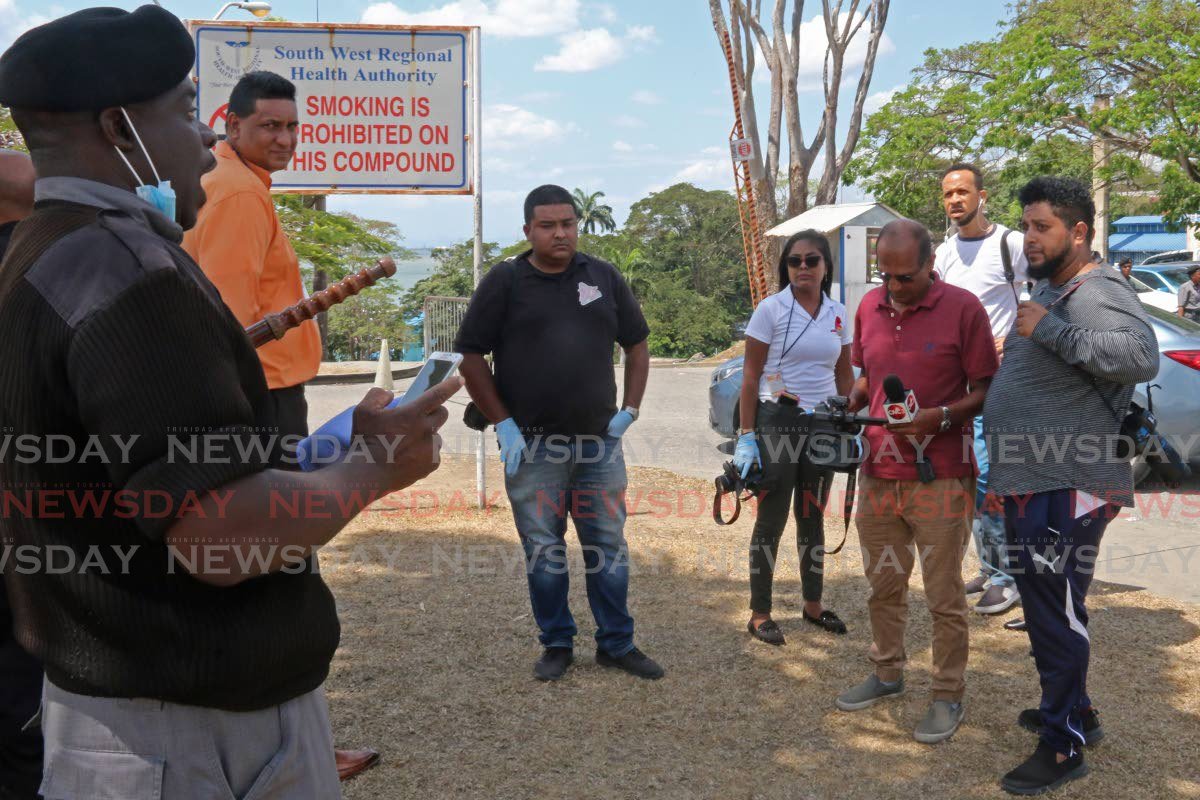