AFTER a meeting with several stakeholders on Wednesday morning, members of the Point Fortin East Secondary School’s Parent-Teachers Association said no guarantee was given that the school will be reopened on Monday, as previously stated by the Education Ministry. They were told the date is tentative.

Secretary of the school’s PTA Robertha St Hillaire told Newsday a meeting was held at the Point Fortin West Secondary School – approximately a five-minute drive away – with the school supervisor, principal, and other officials/representatives from the Ministry of Education and the TT Unified Teachers Association (TTUTA).

She said the main discussions included backup plans for the form five and form six students to be provided with a space at Point Fortin West Secondary School to complete their remaining SBAs (School-based assessments) and lab experiments. Those are worth 20 per cent of a student’s final grade in the CSEC and CAPE examinations.

On Tuesday, the PTA held a meeting, along with students, informing them the association was told the school was being shut down until further notice with no explanation. The meeting eventually became a protest in front of the office of Point Fortin MP Edmund Dillon as the association felt he should “stand in solidarity” with it.

Dillon said Education Minister Anthony Garcia told him there was an electrical problem that would be sorted out by the end of the week. Asked if any direct communication between the ministry and the school would occur, he said he would hope so but he could only say what Garcia told him.

The Education Ministry then issued a press release later that day saying there was no shutdown, and that the school was being temporarily closed for the rest of the week to facilitate repairs. It said classes would resume next Monday.

President of the PTA Tafara Lewis told Newsday the association was disappointed as the Education Ministry still had not directly communicated with the school.

Anyone trying to enter the school’s compound is being turned away and told that due to safety reasons, no one is being allowed on the compound because of the type of work being done.

But when Newsday visited the compound on Tuesday morning, the security guards were seen opening the gates for certain vehicles to enter. Some teachers also entered, and Dillon also visited in the afternoon.

St Hillaire told Newsday, “There is a long list of electrical defects that need to be fixed.

“We will hold them to the date of February 10 because they put out the date however in the meeting we couldn’t get a guarantee. Nobody wants to say yes for sure - It’s still ‘if.’”

She said both the PTA and the TTUTA representative asked to get official notice as soon as possible so the information can be relayed to the teachers, students and parents.

Newsday contacted Education Minister Anthony Garcia, as well as Minister in the Ministry of Education Dr Lovell Francis for comments, but all calls went unanswered.

However, in response to a question in the Senate on Wednesday, Leader of Government Business in the Senate Franklin Khan said remedial works on the school would be completed by next week.

He said following the prohibition notice served to various blocks within the school by the Occupational Health and Safety Authority the ministry requested a structural inspection from the Works and Transport ministry at the school. He reported that in a letter dated January 25 the ministry stated that the buildings “appear to be in fair physical condition.”

Khan said, in light of that, the ministry engaged the National Maintenance Training and Security Company to conduct air-conditioning, ceiling replacement and masonry remedial works to Blocks C and D and an electrical upgrade remedying the defects as outlined by the Electrical Inspectorate. He reported the works were 50 per cent completed.

“Every effort is being made to ensure the students of Point Fortin East Secondary School have access to a quality education.”

Khan also responded to a question about the Poole RC Primary School and parents’ protest over the absence of transportation arrangements for their children relocated to another school. He said the school was relocated to St Therese RC in September 2019 and at the time of relocation a request for transportation was made to the school supervisor of the south eastern district. He added, however, that there appeared to be some miscommunication and the request was not relayed to the Education Ministry head office.

He said the request for transportation was brought to the attention of the school supervision and management division Tuesday.

“The Ministry of Education is currently in the process of making arrangements with PTSC to facilitate the transportation of approximately 60 students within the shortest possible time.” 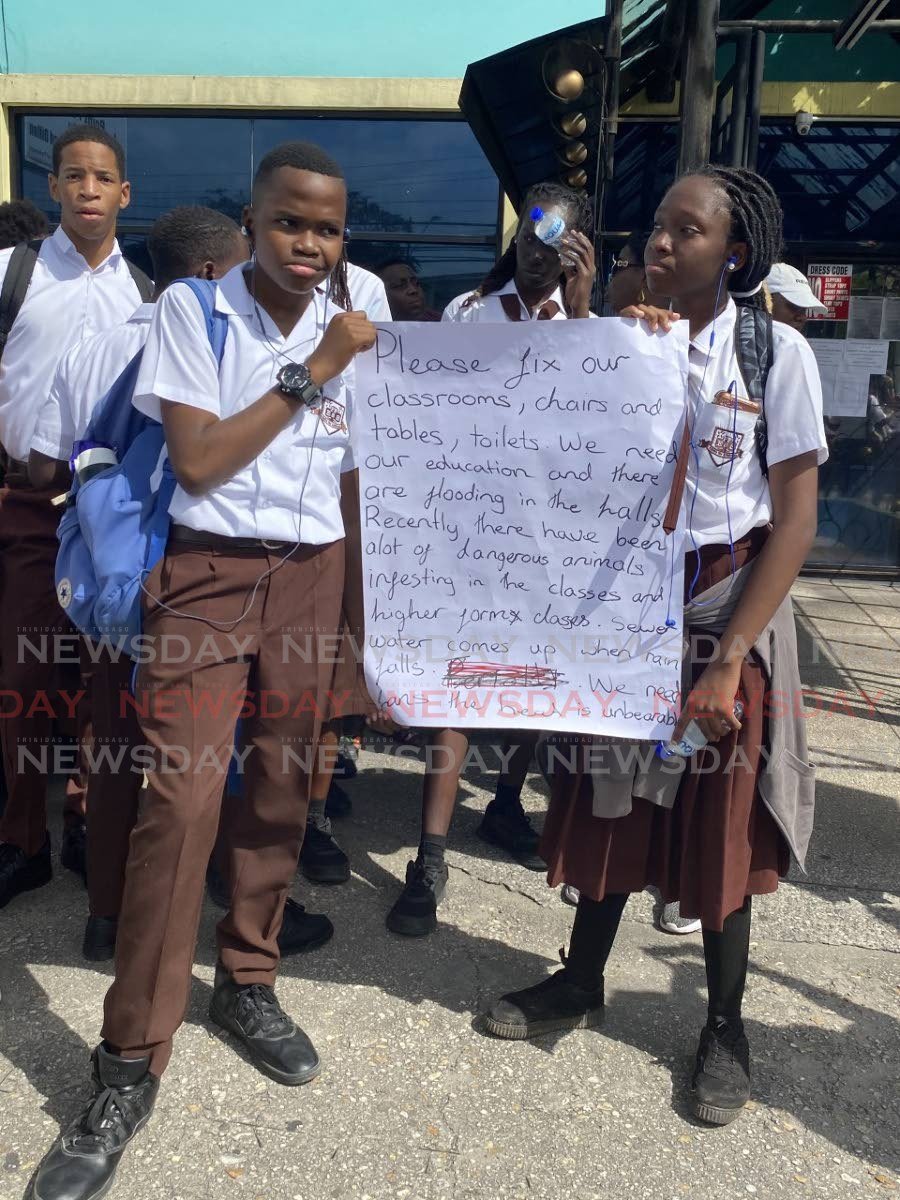