AFTER being overlooked by the TT Red Force for the Regional Super50 tournament, the duo of Joshua Da Silva and Yannic Cariah returned to the TT outfit with a bang. The pair slammed unbeaten centuries to put the Red Force in a commanding position against Jamaica Scorpions in the West Indies Four-Day Championships.

Da Silva cracked 113 not out and Cariah ended on 100 not out as Red Force declared on 460/4 in the first innings at the Brian Lara Cricket Academy in Tarouba, on Friday. Three Red Force batsmen also got half centuries with captain Darren Bravo falling for 66 in the morning session after Red Force resumed day two on 241/3. Bravo’s knock added to the half centuries scored by Keagan Simmons (89) and Jeremy Solozano (73) on Thursday. Scorpions closed in trouble on 94/3 on Friday, still trailing by 366 runs.

The normally patient Cariah showed a different side to his batting with a purposeful century off 139 balls.

He said, “I have been thinking about how I could improve my batting. My strike rate is very important for me even though my method is to occupy the crease, (but I need) to show more intent where I could help the team score a little faster.”

Da Silva, who led the West Indies Emerging Players with the bat during the Colonial Medical Insurance Regional Super50 tournament, was asked how he felt about his effort.

He said, “Excellent, I feel like I am just riding the wave with form. I just want to continue it and hold it as long as possible, putting in the hard work and getting the results.”

Cariah, who captained the Emerging Players to the Super50 title in December, dominated the second session, scoring the majority of runs to take the match away from the Scorpions. Red Force, resuming the second session on 306/4 with Cariah on three and Da Silva on 56, maintained control of the match with Cariah leading from the front. Cariah showed intent as he raced to 50 off only 80 deliveries.

He cracked spinner John Campbell with a slog sweep for six, before getting a single to bring up his 50.

On the other end, Da Silva was content to take the back seat as he approached his maiden first class century.

Cariah brought up the Red Force 400 and the 100-run partnership with Da Silva when he struck a straight six off spinner Patrick Harty.

Da Silva was now in the nineties and was satisfied with picking up the singles. Cariah took a liking to Harty, cracking him for four through the covers before the tea break.

Da Silva did not have to wait long to complete his hundred as he got a single off fast bowler Derval Green.

Da Silva opened his hand after reaching the milestone pulling Green for six over the mid-wicket fence.

The roles were now reversed as Cariah was happy to push the singles and twos as he started thinking about his century. Cariah punched the air as he got a single to bring up his fourth first class century. Red Force declared immediately after on 460/4 with Cariah and Da Silva unbeaten. Cariah struck seven fours and two sixes, while Da Silva’s knock came off 211 balls and included eight fours and one six.

Scorpions openers John Campbell and Assad Fudadin got off to a positive start against Red Force medium pacers Odean Smith and Terrance Hinds. Off spinner Bryan Charles then caused the batsmen some problems in his first over, but it was Hinds who got the breakthrough when Fudadin was dismissed for nine when he pulled a delivery straight to Akeal Hosein at square leg.

In the next over it was 32/2 when Campbell was sent back to the pavilion for 18, as he was trapped leg before to Charles attempting to sweep a straight delivery.

Scorpions were then reduced to 53/3 when Jermaine Blackwood played onto his stumps for six to give Charles another scalp. Rovman Powell and Paul Palmer ended on 25 not out and 31 not out respectively as Scorpions closed on 94 /3. The match continues at 10 am, on Saturday.

Did not Bat: O Smith, T Hinds, B Charles, A Hosein, Y Ottley

A Fudadin c Hosein b Hinds*9 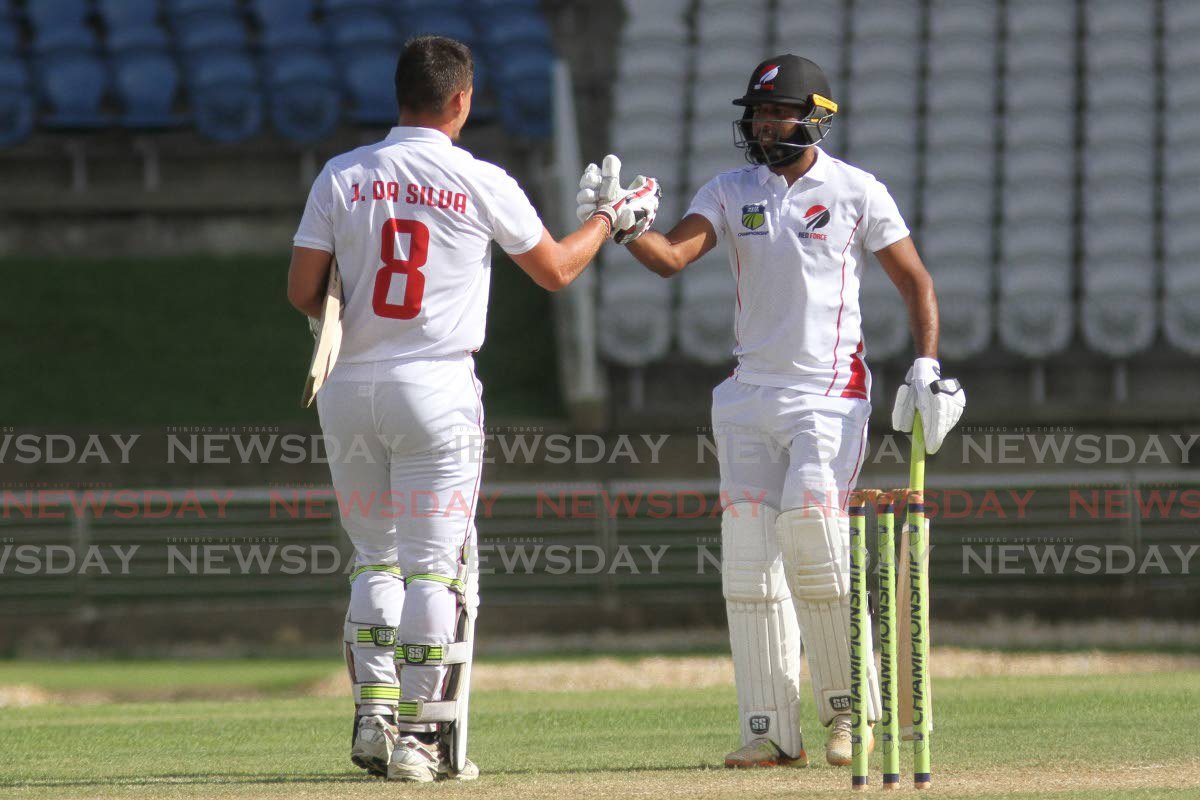