Secretary General of the Sanatan Dharma Maha Sabha (SDMS) Satnarayan “Sat” Maharaj was an activist for the Hindu community of TT. Though a controversial figure in the country, he dedicated most of his life advocating for the rights of the East Indian community.

He died on November 16, 2019 at Medical Associates Hospital, St Joseph. On November 7, Maharaj suffered a stroke and was rushed to the hospital. He was 88.

Sirjudaye and Sieupersad were separated when Maharaj was six. After his brother’s death Maharaj was sent to live with his grandmother, Deolatia and his extended family in Caroni. His grandfather Rampartap Maharaj died at 32, leaving Deolatia as the matriarch of the family.

In his grandmother's home, he cultivated a love for the soil as his family had a vibrant vegetable garden and sold extra produce to their neighbours. Maharaj would help in the garden tending to the rice. He was particularly proud of his skills with a grass knife.

As a child he enjoyed cutting rice, playing cricket, fishing and fighting – a trait he never let go of as he dedicated his life to fighting for issues, he deemed to be injustices against the East Indian and specifically Hindu community.

In 1944 he moved to San Juan with his father and his step-family. Maharaj wasn’t particularly pleased as he disliked his step-mother and half-siblings. He attended the Canadian Mission School on San Juan Hill where he expressed feelings of isolation and being an outcast, away from his home in Caroni. The book described Maharaj’s embarrassment when he had to go to school in shoes and a book bag when at the time, he recollected everyone going to school barefooted.

Missing his grandmother’s home extremely, he returned to Caroni and eventually became a pupil-teacher at the Caroni CM School earning £14 a month which he handed over his to Deolatia who then gave him a £5 allowance for shoes and clothing. She then divided his money into savings and put the rest back into the home.

While he worked as a pupil-teacher at Caroni CM School, he was the secretary of the Youth Arm of the Caroni East Indian Association (CEIA) established by village elders such as Bhadase Sagan Maraj who founded the group in the early 1940s to look after the interest of Indian community in the area, be they Hindu, Muslim or Presbyterian.

There he learned debating, public speaking and how to conduct meetings. Maharaj was also secretary of the Caroni Hindu Youth Organisation, a group formed around the time of India’s Independence in 1947. It was formed when there were conflicts between Muslims and Hindus.

As a teenager he enjoyed going to Palladium Cinema in Tunapuna and liming in the river with his friends. His time as a pupil-teacher helped him grow and become focussed.

Maharaj's faith was tested as the school board kept asking him if he would convert to Christianity, but he adamantly refused. He was threatened with being transferred to another school, and because he did not convert, he was sent to Biche CM School. A car to Biche from Caroni cost £15 pounds at the time. So he had to stay with the headmaster of the school, renting a room for £5.

The headmaster asked him to snitch on his fellow teachers. Maharaj refused and got written-up by the headmaster for insubordination. This led him to transfer to the school in Plum Road, Manzanilla, still far from home, but at least near the water. Maharaj loved swimming in the Caroni River. When he moved to Manzanilla, he was overjoyed to live near the beach.

On June 28, 1952 through an alliance between Bhadase, Simbhoonath Capildeo, a barrister-at-law, and Minister of Education, Roy Joseph, the Sanatan Dharma Maha Sabha (SDMS) was created by Act 41 of Parliament, 1952 and Bhadase was elected president. The goal of the Maha Saba was to educate the Hindu population.

Sat left the Presbyterian board for the Maha Saba that September and transferred to the Riverside Hindu School. The book said some Hindus who converted to Presbyterianism to teach, reconverted to Hinduism and taught at Maha Sabha schools.

Bhadase approached Maharaj and asked him to marry his daughter Shanti. They married on June 28, 1953. Sat was 21 and Shanti was 14-years-old.

Maharaj had more dreams than just being a teacher, so he took his family to London where he attempted to work and study law. Eventually he let go of his studying ambitions of being a lawyer and joined the civil service when he became a father of six. He spent 14 years in London and returned to TT in 1970.

Maharaj had two failed attempts in politics when he contested for St Augustine constituency in 1971 and Chaguanas in 1976 for the Democratic Labour Party (DLP) but lost both times. He was however, elected secretary general of the Maha Saba in 1977 and he dedicated his life to improve the Hindu community through education.

In 1986 he lobbied for donations and built a two-storey administration centre for the Maha Saba on the Lakshmi Girls’ Hindu College.

Practising cultural events, Maharaj believed, was important for children to learn about their heritage. He insisted the SDMS took over Phagwa celebrations and make it children-friendly. In1980 the first Children’s Phagwa took place at the Maha Saba headquarters at Lakshmi Girl’s. The opening ceremony was officiated by Sir Ellis Clarke, then president of TT. Minister of Education and Cultural Affairs Dr Cuthbert Joseph was in attendance.

The preliminary and semi-finals took place in different SDMS schools and the grand finale was at the Maha Saba’s head office. In 1996 the Maha Saba sent the top eight performers to perform at the Wembley Cultural Hall in London, England, as part of a multicultural presentation for TT’s 34th Independence celebrations.

In 1997 an activist group called the Indian Revival and Reform Association (IRRA) was formed. Inspired by the observance of Indian Emigration Day in Guyana, IRRA established a committee to work on having a similar day. In 1997 the IRRA approached Maharaj and the Maha Saba to join them in celebration. Sat agreed and organised a celebration on May 27, 1997 at Lakshmi Girls’.

Maharaj was appointed the chairman of the planning committee and May 30 was designated as Indian Arrival Day. In 1994, then prime minister, Patrick Manning announced May 30 would officially be known as Arrival Day – a term that upset Maharaj as the word Indian was omitted. Under Basdeo Panday, it was named Indian Arrival Day when the UNC was elected in 1995.

On May 7, 2006 the Maha Saba established the first Indian Caribbean Museum located near the Temple in the Sea in Waterloo, dedicated to the preservation of East Indian Caribbean history including relics from indentureship. The collection includes musical instruments, agricultural objects, cooking utensils, pieces of clothing, photographs and historical books. The museum also has an art gallery, reference library and a digitised genealogical database. The Museum is the private property of the Maha Saba.

Maharaj together with Inshan Ishmael, president of the Islamic Relief Centre, challenged the constitutionality of the Trinity Cross in the San Fernando High Court on the grounds that the religious views of the Muslims and Hindus of the country were being compromised as the highest award of the land had a Christian symbol. Justice Peter Jamadar determined the award was discriminatory but could not strike it down as it was protected by the 1976 Constitution. The matter was taken up to the Privy Council.

In June 2006, Manning created a committee, headed by Professor Bridget Brereton to review the renaming of the Trinity Cross. Brereton recommended it be renamed to the Order of the Republic of TT in 2008.

In 2010, the People’s Partnership gave the Order of the Republic of TT posthumously to Pundit Krishna Maharaj for Community Service. He declined to accept the Trinity Cross when he was nominated for it in 1995 by Manning.

In 2010, Maharaj received the Chaconia Medal Gold from President George Maxwell Richards for long and meritorious service to the country in the sphere of religion.

Reparations and other legal battles

The Maha Saba frequently took the government to court on national issues. In a 1999 Indian Arrival Day speech Maharaj said he would fight for reparations for property rights taken from East Indians. Between 1845 to 1945 marriages performed outside of Christian rights or by the government’s Warden’s Office was not considered legal. Thus, any children coming out of Hindu and Muslim weddings and widows were not able to inherit property. Maharaj claimed the marriage law was to get Hindus to convert to Christianity. He was highly criticised for taking a $2 billion writ for reparations.

In 2000, Maharaj with the SDMS and the Tobago Hindu Society took on the Tobago House of Assembly to establish a mandir in Tobago. Some 18 years later the society was able to get property in Signal Hill to start building.

The Maha Saba applied for a radio frequency license in 1999. But it would be seven years and numerous legal battles leading all the way to the Privy Council before the licence was granted. The Maha Saba was awarded $952,890 in compensatory damages and $500,000 in vindicatory damages for discriminatory practices by the state.

On January 19, 2007, Radio Jaagriti went on air from Pasea, Tunapuna, adjacent to the Tunapuna Hindu School. All Jaagriti’s revenues generated after operating cost went back into SDMS community activities. Maharaj was the managing director of Jaagriti.

Maharaj went head to head with other religious leaders, including the Thusian Institute for religious liberty that ran anti-Hindu articles in the national newspapers, and Israeli televangelist, Benny Hinn who performed a faith healing on a Hindu man who died shortly after.

Maharaj went under fire frequently for his controversial statements as many viewed him as racist and sexist. In April 2019, Maharaj went on air calling men from Tobago lazy and rapists on Radio and TV Jaagriti. Days later the police carried out an information gathering exercise under the premise of Sedition. Maharaj then filed a lawsuit against the police and challenged the constitutionality of the Sedition Act.

Maharaj also adamantly stood against the removal of child marriage from TT’s laws based on religious grounds. He said it should be protected under the constitutional right of freedom of religion. It was a position that also gained him high criticism in the public eye.

In October 2011, when the child marriage clause in the Marriage Act was being reviewed, he said: "If by accident, a 14-year-old becomes pregnant, then by consent of their parents, she can be married. Is it better to build a place for young, unwed mothers than to marry underage girls?"

Maharaj dedicated his life to building and fighting for the Hindu community. He had six children, several grandchildren. 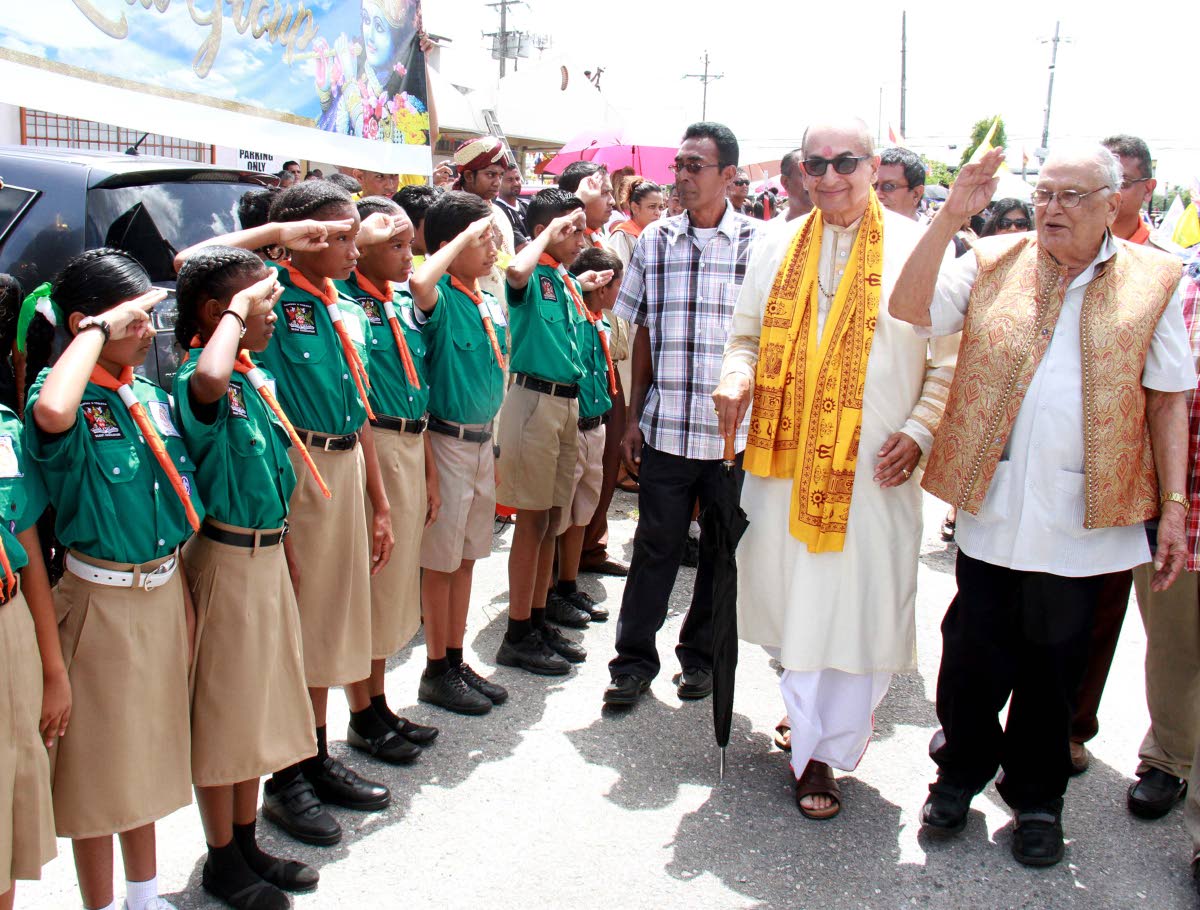