Works and Transport Minister Rohan Sinanan on Saturday opened the Todd’s Road Bridge in Freeport which cost $4.3 million to complete.

The bridge was listed for repairs for ten years.

At the bridge's opening, Sinanan said, “This bridge showed signs of failure ten years ago and it was replaced with a bailey bridge for quite some time before work started in rebuilding the entire bridge. Although it took quite a while to complete, I am happy to formally open the bridge and bring some sort of relief to the residents.”

Sinanan joined with the spiritual head of the Lakshmi Narayan Temple, pundit Gajendra Kumar and other villagers for the ribbon-cutting ceremony to open the bridge.

Todds Roads residents, he said, were subjected to a one-lane bridge while they awaited the completion of the bridge. Sinanan apologised for any inconvenience to residents while the bridge was being built, saying he was sure that commuters who used the road would be happy to see the new bridge.

Todds Road, he said, is a busy area which is heavily populated by new housing in the Caroni Central constituency. Sinanan said Todds Road had also had many landslides and a team from the Ministry of Works visited the area regularly because of that.

In terms of bridges and roads, he said government had many projects that neared completion.

“A lot of the constituencies will have new bridges and new roads in the coming months,” he promised.

The ministry, he said, is embarking on a major road-paving programme that will commence after the budget is read on October 7.

“This will bring relief to a lot of people in TT who have been complaining about infrastructure.”

Kumar said the new bridge was a blessing as there was a constant flow of people to the temple every day.

“During the weekends there are weddings and weekly temple service taking place.”

UNC Caroni Central MP Dr Bhoe Tewarie, who had called for the bridge to be completed, said he had not been invited to the opening ceremony.

He said Sinanan owed him an apology and was very disappointed with the minister.

“I thought that I had a good working relationship with him but apparently not. I exchanged text messages with him asking about the date and time of the opening of the bridge. He said he would get back to me yesterday (Friday) but never did.”

The MP said he resorted to sending the UNC constituency chairman to represent him. Even though he was not present for the opening, Tewarie said he felt glad that the people of Siewdass Road now have a good bridge.

“I am happy the Chorro bridge is completed as it’s the main thoroughfare between Freeport and Preysal.

“The important thing is my constituents got the bridges they asked for.” 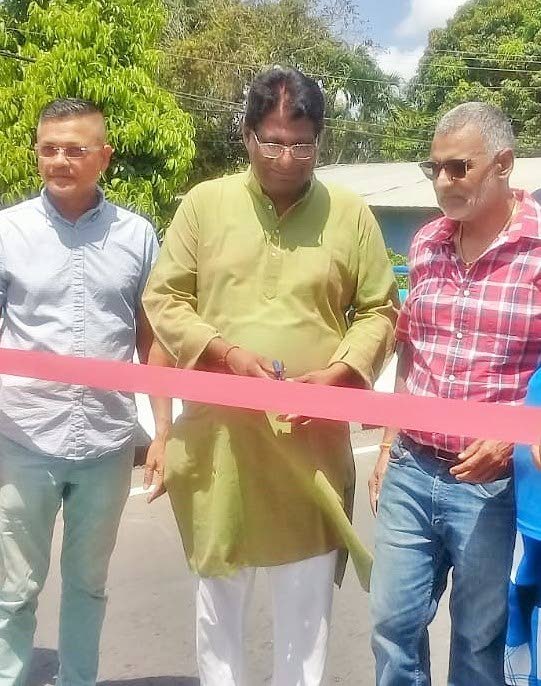