Artistic expression is an act of love making. Ask anyone who participated in the Caribbean Festival of Arts (Carifesta), held from August 16-25 in TT. The artists — painters, actors, musicians, dancers, photographers, writers and more — made love every time they practised their art. And it showed in the way they presented themselves, connected with each other, observed similarities and celebrated the differences of the Caribbean.

It was my first Carifesta experience and there was no possible way for me to attend all of the events, as there was so much packed into those intense ten days. The Grand Market played host to the NGC Bocas Lit Fest, a large and small stage with multiple dance and music performances, fashion booths, cultural tents of the islands, an Angostura bar and a food court with culinary attractions from countries such as Guyana, Haiti, Antigua and Barbuda and a bar from Curacao to name a few.

At Queen’s Hall, the National Academy for Performing Arts (NAPA), Southern Academy for Performing Arts SAPA, Central Bank Auditorium and Little Carib Theatre there were music shows featuring gospel and jazz music, dance, theatre and Best Village. The Live Music District, an initiative of Music TT, featured different acts every night on Ariapita Avenue. The National Trust held indigenous tours to places such as Valencia, Arima and Princes Town. The University of the West Indies (UWI) hosted a symposia called Journey Round Myself. At the National Museum and Art Gallery there were several events to engage the public, and festivals such as the TT Film Festival and Animae Caribe chose to combine their respective festivals to facilitate Carifesta.

The official opening of Carifesta, carded for 3 pm on August 16, was a spectacular display of artistic TT collaborations. It started later, and caused some severe traffic issues, but that didn’t take away from the beauty of it.

Many of the women were dressed in long, flowing dresses and head scarves, while others wore mas costumes. It was the first time I had seen such a vast difference in the region’s cultures. For example, the contingent from Guyana featured a man dressed in a full body-hair suit, representative of Massacuraman, an Amerindian bush spirit from Guyana that protects the forest and the land animals. While Suriname, one of the few colonies with an Indonesian population brought in during colonisation, featured Indonesian dancers along the parade route.

For me the stand-out star for that evening was Nickolai Salcedo, the lead narrator for the performance. Salcedo, an eclectic artist, participated in multiple ways throughout Carifesta. His art work was prominent at Think Art Work Studio, his band Gyazette performed at the Elemental Series for rock night, and he acted in Juliette McCawley’s Sampson’s Heart, which was awarded the 2019 People’s Choice Award for Best Short Film in the TTFF.

Meanwhile, the NGC Bocas Lit Fest hosted open mic readings and readings from a number of writers around the Caribbean. Emerging writers took the stage at the open mic to talk about a number of issues including money management, life after a miscarriage and a satirical piece on how to write about the Caribbean. Outside the Grand Market a number of fringe events took place, such as the Elemental Series at the Big Black Box. There artists performed on the backyard stage, with a different theme every night, among them soca, spoken word, roots and reggae, rock and hip hop.

There was a special space for young people at the Youth Village, where the youngsters were exposed to art therapy workshops, digital expos from Animae Caribe, face painting, singing, dancing, virtual reality games and markets. Every afternoon there were concerts featuring a number of regional artistes.

On August 22 Animae Caribe held its film screening at the Government Plaza. The screening opened with Kenny and Brown Bear, a film by autistic UTT student Kendell Boodoo and ended with Hair Love, an animated short film that promotes self-love for black girls and shows black fathers as care givers too. Hair Love premiered before Angry Birds in the US, and the Animae Caribe audience got to experience the Caribbean premiere of the show.

Haiti beyond the stereotypes

I first saw the Haitian contingent at the parade when all its members dressed as affranchis, a French legal term for emancipated slave. Over 160 people had come from Haiti for the festival, and Haitian-American fashion designer Dayanne Danier was featured in the fashion component. The works of painters Xavier Dalencour and Joseph Pierre were featured in the National Museum.

Pierre, an international artist with a studio in Brooklyn and Haiti had brought four abstract paintings, which would usually sell at US$40,000. But for Carifesta they were available for US$10,000.

Pierre said one defining characteristic of Haiti is the people’s friendliness and fighting spirit.

“In Haiti the people are very strong and they are fighters. They fight the things they don’t like, but they welcome people. I think it’s one of the best countries that welcome you from wherever you’re from.”

Haiti was the first Caribbean country to gain its independence in 1804. It has an estimated population of 10.8 million, making it the most populated Caricom country. Former president Michel Martelly performed on the Carifesta small stage as Sweet Micky.

On Haiti’s country night, there was an exceptional display of dancing and singing, and Grammy-nominated Boukman Eksperyans closed the show with a powerful performance.

Carifesta was a worthwhile experience for me, but it too had its shortcomings. In addition to the fiasco with the unavailability of sufficient tickets to events for the general public, the digital communication aspect of the event left a lot to be desired. For example, although there was an app, website and the involvement of members of the Royalty Club, a digital strategy development and digital media production company, there appeared to be little thought about audience engagement and digital communications. At no time did I hear a single announcer encourage the crowd to tweet or post about their experiences on Facebook or Instagram, nor was there a hashtag campaign — strategies which allow for longevity of online content and makes the content easier to access. 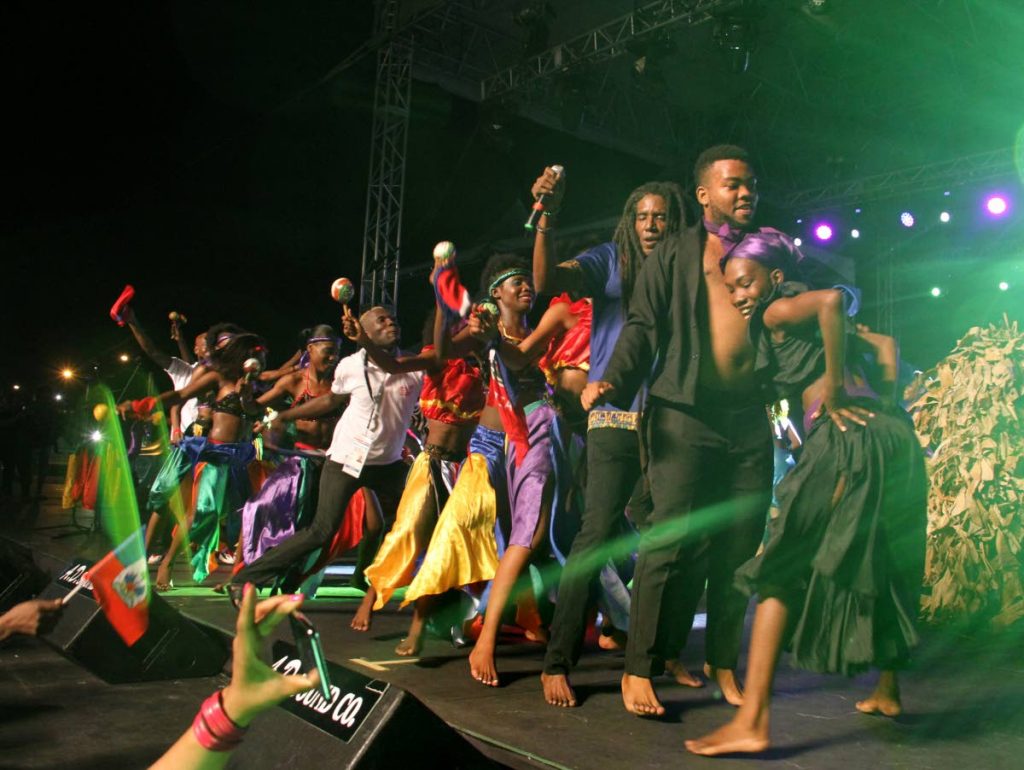