MUSIC is transcendent for 20-year-old Jayyidah Leonard. It is her way of communicating beyond languages, building bonds with beats and creating meaningful connections on and off the dance floor. She wants to be a DJ playing house music across the world.

House music is a sub-genre of electronic dance music that uses synthesised beats. It is named after The Warehouse club in Chicago and originated between the late 70s to early 1980s as a derivation of disco, influenced by elements of soul and funk. There are several sub-genres which include Chicago house, acid house, progressive house and tropical house.

Leonard discovered her passion for music when she was 12 and became exposed to music festivals, such as Tomorrowland in Belgium, when she got older. Her grandmother, veteran radio and television broadcaster Josanne Leonard, and an uncle, a former promoter, are the closest examples of DJs in her family.

Leonard, a barista from Diego Martin, considers her dream a subversive aspiration as, according to her, being a DJ in TT is a male-dominated space.

"I communicate through music. Usually, when I meet new people, the first thing I would ask is, who is your favourite artist? I would get to know people better through music. That is when I realised I wanted to be a DJ. I aspire to encourage more women, not just young women, but women of all ages, to step into music confidently because it is very male-dominated."

Leonard's sets include hip hop artists like Tyler, the Creator and Earl Sweatshirt and jazz eclectic artists such as Messago and French Kiwi Juice, also known as FJK. However, after house music, reggae is one of her top genres.

"I don't have favourites per se, because it is such a wide range with me. I create playlists that have multiple different people, but if I were to choose a favourite, it would be Koffee! I'm real loving the girl power right now, seeing women rise up. My other favourites are Protoje, Chronixx, Barrington Levy and Buju, definitely Buju."

Her first gig was on July 6 at an event called Bald Babes Bashment, at Euphoria Lounge, Dundonald Street, Port of Spain. Bald Babes is an all-women tattoo artist collective who threw the party to raise funds for their new tattoo studio.

Leonard completed a one-year certificate in technical theatre production from the University of the West Indies, St Augustine. There she learned about stage presence, lighting and sound design. 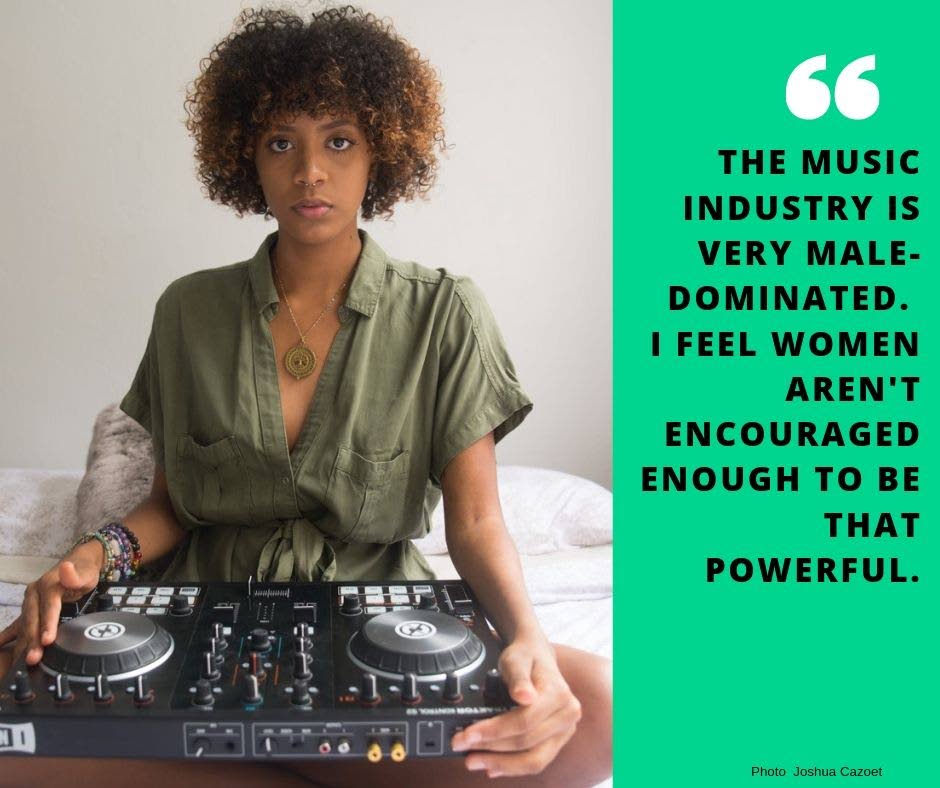 Now, she wants to further her education in London at Point Blank Music School. It is a music and creative media training facility that offers a variety of courses in electronic music production and sound engineering, DJing, singing and songwriting.

"They are an electric music school in London ­– very well renowned – they don't only offer DJ courses but radio hosting, songwriting courses and a wide range of things to learn. It is not only DJing but producing. I am going to get an introduction into music production software, learn how to make my own music and learn how to use DJing software to create my own mixes. I'm not a musical genius who knows the correct terms about music, so that's why I want to go to school and learn."

Leonard started a GoFundMe account to help her pay her way through school. She needs £8,700 (TT$78,000) for the three months in London.

Using a guideline from the school, she was able to calculate how much she would need for her education.

"It's a lot cheaper than most courses. The £8,700 for my course includes accommodation, travel and living expense. I tallied up for the three months what I needed to survive in London, added on the course fees and flight to England. Hopefully, that would sustain me."

"A lot of the people are strangers and I am shocked that people who don't know me are willing to donate to my cause."

Leonard intends to return to Trinidad to continue to practice her craft as a DJ. She also wants to share her knowledge by setting up tutoring sessions for anyone interested in learning about house music.

"I want to continue working on my craft, so I feel good enough to help people learn the things that I learned. I would love to mainly help a lot of girls," she said.

Why go all the way to UK to learn to be a DJ when there are a number of programmes offered in TT? Leonard said house music is not popular in TT and she would not get a full education.

"There is not a house market here. DJs here usually play soca, dance hall and hip hop. Here is not the place where I feel comfortable learning those kinds of skills in particular. That's why I want to learn outside, come back and share that knowledge, and expose people."

However, she says there is a slow-growing demographic of people who love house music in TT. Trinidadian DJ, Kallaloo, formerly known as Kid Kallaloo, is her local inspiration and mentor in the local house scene.

"I really look up to him. When I saw him playing the type of music I loved for so long in my country, I said: 'Oh my God they have people doing it here.' I reached out to him, and asked him to show me how to buy equipment. He introduced me to Point Blank Music School."

Aside from the in-depth education on electronic dance music, studying at Point Blank will give her access to international experience and exposure. Point Blank's students often get a chance to play sets in London clubs and are featured in DJ magazines.

"They allow us to go play in clubs in London so we get a taste of the job, and depending on how well I do, and I intend to do exceptional in the course," she said.

Breaking through in any market is difficult. Leonard says many local DJs tend to thrive off of their links and connections to others in the music industry. However, because of social media, she is able to build a following on her Instagram profile.

"Luckily we have social media to gain our own market and get to promote ourselves. So we can get our friends into what we are doing. You just have to create your own things," she said.

Her Instagram profile @iamyidah (https://www.instagram.com/iamyidah/) has 2,247, and growing, followers. She uses mostly stories to promote herself. However, keeping people posted on social media is not her favourite thing to do as sometimes she gets stressed out over constantly keeping people engaged. She deactivates her account ever so often for peace.

"I worked a long while to get that following, but it is not my main focus. I would like to grow and have more people find out about me, but I would have to put in the work to get that. I am more interested in real-life interactions. I'm trying to find the right balance," she said.

Leonard enjoys podcasts and avidly listens to them to find out the latest music trends. She wants to add podcasts to her digital footprint as listening to music podcasts expanded her knowledge, and she wants to have an informative and influential voice.

"I would love to have a podcast to expose people to new music. I really like how the podcasts exposed me to new music. I don't want to only play my own music, but have artists come and talk about their music."

Leonard thinks the older generation is ready to criticise younger ones for wanting to pursue a career as a DJ rather than the typical doctor, lawyer engineer.

"It's not something they look at as anything good. I think it is because they haven't been exposed to things like that in Trinidad. They look at it as lower-level entry thing that's going to be a phase.

"I don't think it is encouraged just because they haven't seen enough female DJs, not because they (women) aren't capable of doing it. The older generations would say: 'Okay guys can do it, but who do you feel you are to try and do it (as a girl).'"

Music is a powerful tool to influence people and charge the spirits of a crowd to move without inhibitions. For Leonard, she thinks women are not encouraged to command such a spirit because women should not be allowed to have such power.

"I feel women aren't encouraged enough to be that powerful. Music is something that makes people feel powerful, makes people feel strong, it is a safe space for many, not just myself. I want to use that talent to help develop that in people my age."

She does, however, have women DJs to look up to. Two who epitomise girl power for Leonard are Berlin DJ Peggy Gou and US DJ Honey Dijon. Peggy Gou, in particular, has become one of her icons.

"She is of South Korean heritage. Since I was 13, I had a fixation with South Korean culture and K-pop. I discovered her last year and when I found a woman who is from South Korea who was doing DJing. I was like: 'Oh my God I could do this.' It was so amazing that she got so big. She is also in the same genre music with me which is house music," she said.

In spite of naysayers who try to discourage her from pursuing her dreams, her number one supporter is her mother Ayanna Leonard.

"My mom has invested in me. She firmly believes in me, and without her, I would not have pushed it. I had my own doubts and people shot me down. I felt like I could not do this, but my mom has been my core support and investor so far and I can't wait until I am successful so I can give back to her. I love my mummy. "

Reply to "Girl power in the house"