AMID intermittent showers about two dozen LGBT activists this afternoon displayed a large banner in rainbow colours outside the Parliament building in Port of Spain to launch a month of celebrations of TT Pride. Passing drivers honked their horns in support, to activists’delight.

Brandy Rodriguez of the TT Transgender Coalition told Newsday the event echoed similar events taking place in the US to commemorate the 1969 Stonewall riots, seen as a milestone in the advocacy for LGBT rights. She said the erection of the LGBT banner Friday represented a wall symbolising the Stonewall site. 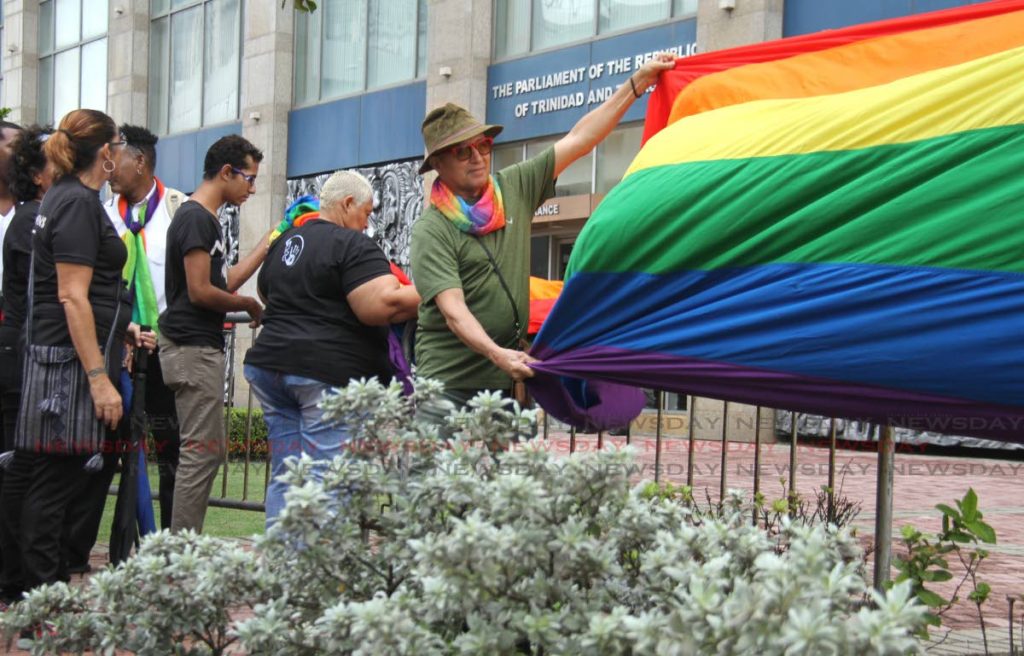 “Today commemorates the visibility of trans people, both male and female.”

With Pride TT 2019 dedicated to transgender people, she said yesterday's event was a small step in the right direction for the local trans community, which in the past decade had lost hundreds of people to perceived "forced migration" to more tolerant countries than TT, owing to marginalisation in areas such as employment and housing in TT.

Her colleague Shannon Sirju hoped to talk to Attorney General Faris Al-Rawi to lobby for personal identification documents such as passports to accurately reflect how individuals self-identify their gender, as in Canada and parts of the US. Saying many politicians probably have LGBT hairstylists and designers, Sirju said it was inconsistent for them to accept the product while rejecting the identity of LGBT people who provide it.

Venezuelan Raymar Diaz, whose husband Edwin Erminy (president of the National Drama Association of TT) drowned at Toco in January, backed the event, as he recalled the huge support he got from the LGBT community and TT overall after the tragedy.

Diaz told Newsday everyone should be free to be who they are without feeling ashamed.

An activist known as Faye pleaded for LGBT equality. “As citizens of TT, protect us from the violence we endure on a daily basis, violence that is physical, mental and emotional, and from discrimination and homophobia.

“We want not to lose our jobs when we are going through changes (that is, changing gender) or lose our housing.” She hoped for a time when LGBT people could walk into a hospital and know their matters would be kept confidential and they would not be turned away because they lived and loved differently.