WHEN it comes to protecting the environment, people need to not only take responsibility for themselves but be proactive about it.

That was the main message of the fourth Republic Bank Inspire Primary School Spoken Word Showcase on Tuesday when 30 children urged their peers and adults to reduce, reuse, and recycle.

The showcase, held at the Central Bank Auditorium, Port of Spain, was the culmination of the national primary school outreach programme hosted by the 2 Cents Movement. The theme of this edition was Climate Change and Plastic Pollution.

The students spoke with passion about the garbage monster that humans created and that was destroying mother earth. They spoke about plastics on land and in bodies of water that harmed marine animals and human beings alike. Most of all they encouraged everyone to do their part to protect the earth; first by not littering and, secondly, by picking up litter they see and throwing it away properly.

Jedaiah Joseph from Curepe Anglican Primary School explained when plastic broke down it was not good for nature so people should stop using disposable dishes and cutlery. “This is not a cartoon, this is real life problems... Just pick up the plastic and save mother earth cause she’s in danger and we, we as a people are the only ones who could curb this world-wide disaster.”

Daniella Williams of St Rose’s Girls’ RC Primary School said the rubbish people made and chemicals they used were killing mother earth slowly. She encouraged farmers to “ease up” on the fertilisers and told people to stop burning tyres. “Stop it! I say stop it! The air is becoming harder to breathe. Now is a trying time indeed – fumes in the air, smoke everywhere, temperatures becoming warmer, ice caps melting into the sea water.” 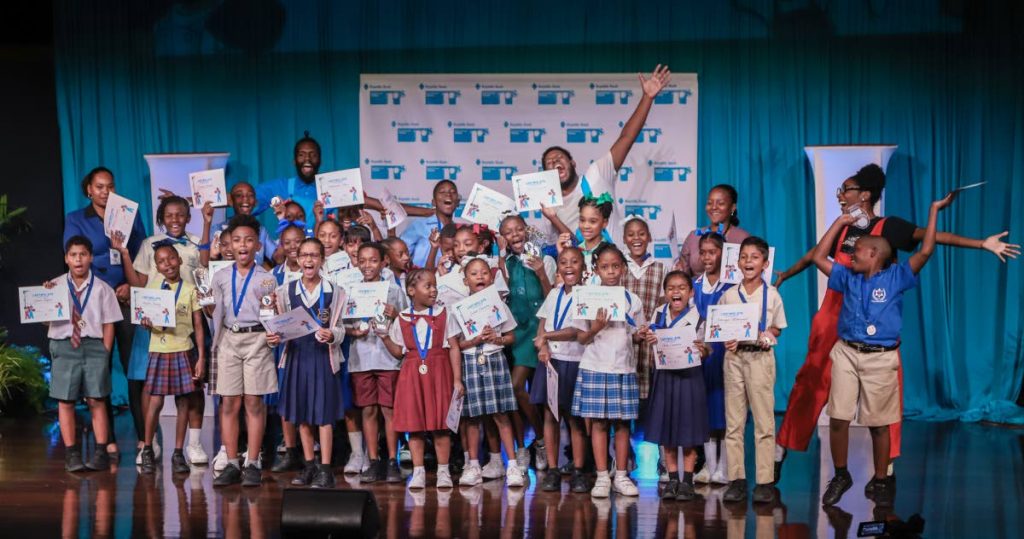 Aliyah Kirton from La Horquetta South Government Primary School painted a disturbing picture of what marine animals go through because of human pollution. She said the adage of treating others how you would like to be treated should extend to animals and the earth. “Allyuh ever had a nice, tall glass of garbage juice? Better than Starbucks. Allyuh like when allyuh getting choke by oil? Best feeling? Allyuh ever had a nice bath in oil man? Well that is how them animals feeling every day.”

Even politics was briefly mentioned by a few students.

Joshua Ramcallian of San Fernando Boys’ RC Primary School said the world’s bloodstream was the ocean and people in TT were simply watching plastic choke and suffocate our oceans, rivers and seas. “Plastic coming out of nature’s mouth like them politicians. Das what I hear my mummy say!”

Jaeda Nicholls, Curepe Anglican Primary School, asked if you ever thought of someone stuffing garbage down your throat, because that was how the earth felt when people littered. “Blame PNM. Blame UNC. Blame URP. Blame everybody else but me?” She asked people to use their independence and intelligence – do not litter and pick up paper and plastic from the ground.

Every participant was encouraged by their peers with shouts of “Support! Support!” and those who were scared or hesitant received an extra boost of courage through cheers and applause or shouts of, “You can do it!”

In addition to certificates and medals of participation, several prizes were distributed.

Adenike Victor won the EMA Commercial Award for the poem that would serve as a good infomercial on the topic.

Atiya Douglas, acting chief operations officer at 2 Cents explained that the programme, sponsored by Republic Bank, was in its fourth year. She said each year they tackled themes relevant to TT’s society.