FORCERIPE FREDRICK is a troubled teen from the fictional village of Vishnu Trace, Trinidad. On a dare, he pelts a big stone through a blind obeahman's window, wounding him. Fredrick hears the man groaning in pain, feels guilty and approaches the house to see if he is okay. Lal, the obeahman, catches Fredrick and proposes he reads to him every morning or he will work obeah on him. Lal has a dreaded reputation of being a murderer who wreaks havoc on people's lives. Out of fear and curiosity, Fredrick agrees to read to Lal, learning more about himself as he discovers the mysterious obeahman is more human than he thinks.

The story of Forceripe Fredrick and Lal the obeahman is called Oats. Written by 20-year-old Rashad Hosein – a second-year Literatures in English student at the University of the West Indies, St Augustine, – Oats was shortlisted for the annual Commonwealth Short Story Prize in the Caribbean region. Though unsuccessful, Hosein said he did not lose.

"It definitely opened some doors for me. It was validating for my writing. Your friends and family could read it, but if your writing does not get that exposure it won't go far. The Commonwealth judges said it was good enough to be shortlisted. It is disappointing to not win, but I did not lose anything," he told Newsday in reply to e-mailed questions.

Since being shortlisted, he was asked to read his work at the Bocas Lit Fest earlier this month and was contacted by a literary agent. They are currently discussing publishing opportunities.

The story Oats, was named after Lal's idiosyncrasy, and he hopes he can develop his literary career to make an analytical contribution to TT's literature.

"I named the story Oats after the obeahman's habit of keeping oats in his pocket. There's a reason why he does this, but it'll spoil the ending if I say why, and might not make much sense without the full context of the story," Hosein said. "Oats, I wrote it in a day. I got up in the morning, had an idea and I did not stop until I finished that evening. I edited it the next day."

Hosein has no idea why his story was shortlisted for the Commonwealth Short Story Prize, but he suspects it is because of the emotional ending, and he thinks the judges like to read stories in creole.

"I don't particularly like that style of writing, but the last few stories that won were written in creole," he said.

In the seven-year history of the Commonwealth Short Story Prize, TT has the highest frequency of winners in the Caribbean, with five wins. Hosein was the sole Trinidadian writer shortlisted this year.

Asked what makes TT such a literary success, he said, "Trinidad has a rich culture, and I think there is a lot for local writers to draw from. There's a lot of history. A lot of different people. A lot of madness. This makes for some interesting stories, but it ultimately depends on the writer's skill.

"I can't say exactly what Commonwealth readers enjoy about Trinidadian stories, but what I can say is we have and have had some amazing authors. (Vidia) Naipaul and (Samuel) Selvon come to mind. I think Trinidadian writers were instrumental in establishing a Caribbean literary canon, but it goes beyond that."

Naipaul is his favourite Trinidadian writer. A House for Mr Biswas is one novel he noted as truly impactful in his life.

"This is nothing short of a prose epic. A House for Mr Biswas was an important book for me in developing a sense of literary confidence for writing about Trinidad. Though I don't plan on writing stories only set in Trinidad – and by extension a Caribbean context – Naipaul's novel did have a significant influence in terms of developing my concept and understanding of Trinidad as a setting.

"And setting as an element of prose can be extremely complex. While it encompasses physical location, the setting of a novel can dictate cultures, attitudes, behaviours and, most importantly, language."

Hosein has a deep love of books and a passion for classic literature, including writers like
John Milton, William Shakespeare, Fyodor Dostoyevsky and Homer.

"My father, Sean Hosein, encouraged me to read at a very early age. My teachers played a significant role and one particular primary schoolteacher, Mr Taariq Ali – a fellow reader and a friend of my father – gave me a great deal of books. My literature teachers at Hillview also played a role in developing my interest in reading and writing. My possible lifelong obsession with Shakespeare began with my form six drama teacher, Mr Gunness, and grew significantly after doing Shakespeare One with Dr Debarros at UWI," he said.

Hosein has dedicated hours of his time to Greek literature, which he describes as the foundation of western civilisation and the western canon.

"Their influence stretches into Dante, Shakespeare, Milton, Walcott – though he claimed he hadn't read (the) Iliad or Odyssey. Possibly every writer in the west has in some way, directly or indirectly, been influenced by the Greeks. I'm no exception."

The fallibility of the Greek gods is the part of Greek literature he finds most appealing.

"The gods are more human than divine. They have flaws. They're not omnipotent, omniscient or omnipresent. The Greek pantheon is very unlike the Abrahamic God. That's interesting because here we have gods that are like us in some manner – they have the capacity to suffer and they have goals, aspirations, desires, and most importantly, imperfections."

Greek literature is so influential in his life that Euripides' The Bacchae inspired his first full-length novel, Sparagmos.

"Set in Trinidad and taking place over the course of a single night, Sparagmos accounts the odyssey undertaken by a failed writer, an artist and a vagrant to witness the final play of the legendary playwright Dr Brown. As the unlikely trio journey through the darkening night, tensions heighten with the threat of Trinidad's escalating violence and the increasing mental instability of the vagrant, Pothound," he said.

The word "sparagmos" means a ritual of sacrifice by dismemberment to the Greek god of wine, ecstasy and pleasure, Dionysus.

"I researched and thought deeply of this concept and its existential implications over many months until I undertook the writing of the novel. Trinidad was the perfect setting given that our widely used local term 'bacchanal' is the same Ancient Greek term used to describe the precursor to sparagmos. Our culture is steeped deeply in this chaos," he said.

He does not think, however, he'll publish this first manuscript.

"The structure is non-linear. I developed and used an experimental style (based on stream of consciousness) specifically for depicting amnesia and psychosis. I might edit it further in the future, but for now it's shelved."

But Hosein hopes to publish a collection of short stories featuring Oats.

"I definitely want to get published. Ideally, I'd want a literary agent and a book deal with one of Penguin's publishers like Random House. But for now, I plan on submitting something to Peepal Tree Press or a similar publisher.

"Most importantly, however, I want to make good art. That is my primary focus. I also hope that one day my work would be analysed academically, even if that day is past my time," he said.

Though well read, he believes he has a lot more to learn and grow as an author.

"There's also the matter of experience. That's important for writers because it's best to write what you know and if you know a lot that's good, though ignorance can be easily fixed with a Google search these days.

"Nevertheless, experience is still necessary. Suffering in particular I think is important. There is something very human in reading about the suffering of a character. It's something we can all identify with, regardless of the particular flavour, because suffering is central to the human condition. At this moment, my writing concerns humanity. Not just Trinidad. There are universal themes in Oats, themes of gratitude, redemption and otherness. I think anyone can read my story and appreciate it," he said.

Hosein's story will be published in Adda, the online magazine of Commonwealth Writers. 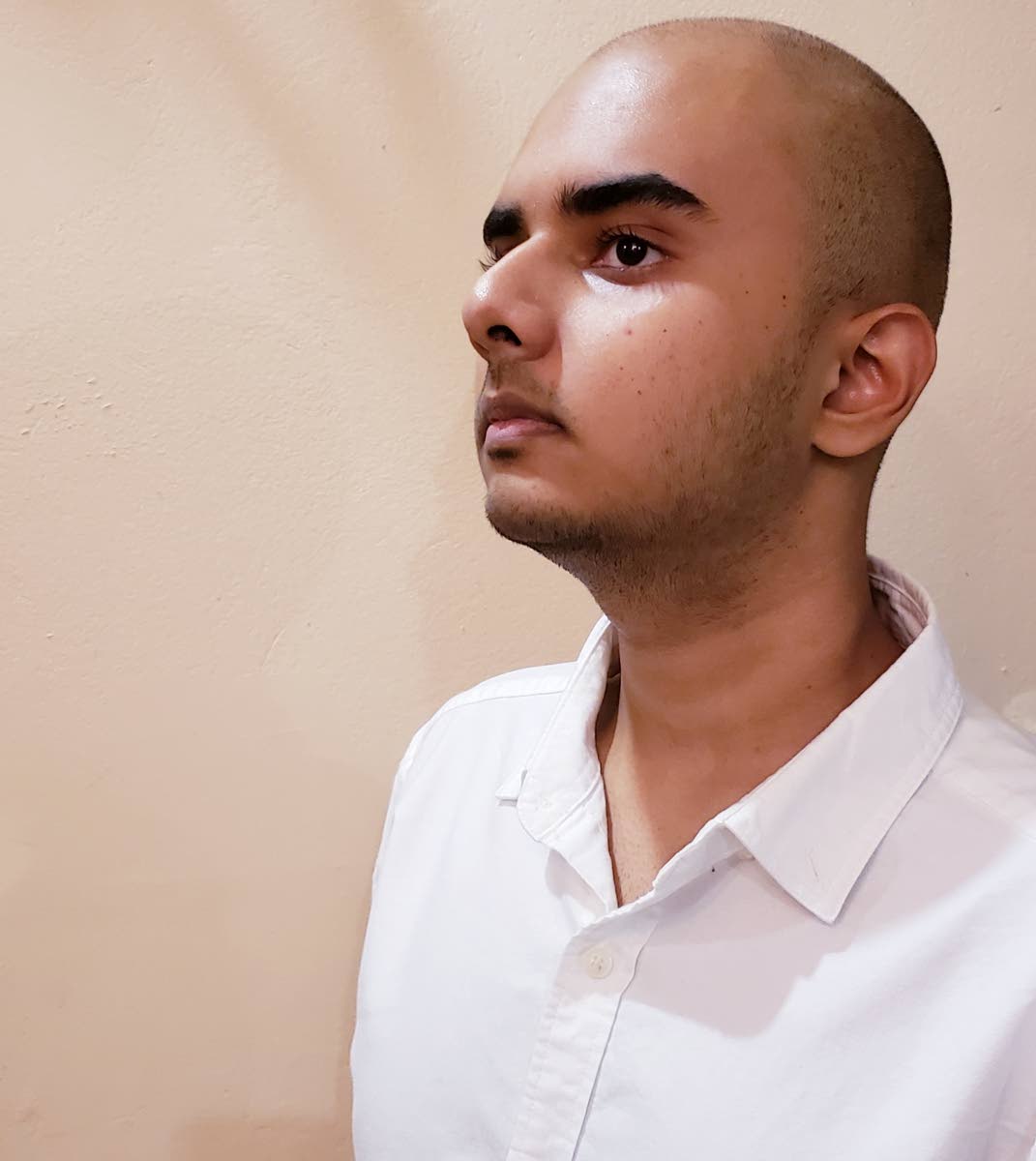