AFTER the successful staging of O2N... Style Me Caribbean last year, the event will expand to include an O2N Eco System and an O2N Zen Zone during a two-day event scheduled for May 25 and 26. There will also be a panel discussion on Developing the Creative Economy on May 20, and another event involving the diplomatic corps.

At the event launch in Hyatt on April 17, O2N founder, Nicole Dyer-Griffith described the upcoming event as a fashion fusion festival, then said: “This year we are now with a week of events, with some major partners, and we are tapping into diplomatic missions in TT and we are going to infuse who and what we are and share with them next week.”

In collaboration with the Dean of the Consular Corps there will be a private O2N Style 2 capsule that will be held at Audrey Jeffers House, St Clair, where organisers and members of the diplomatic corps will get a snippet of what to expect of the ultimate event at the end of May at 02 Park in Chaguaramas. 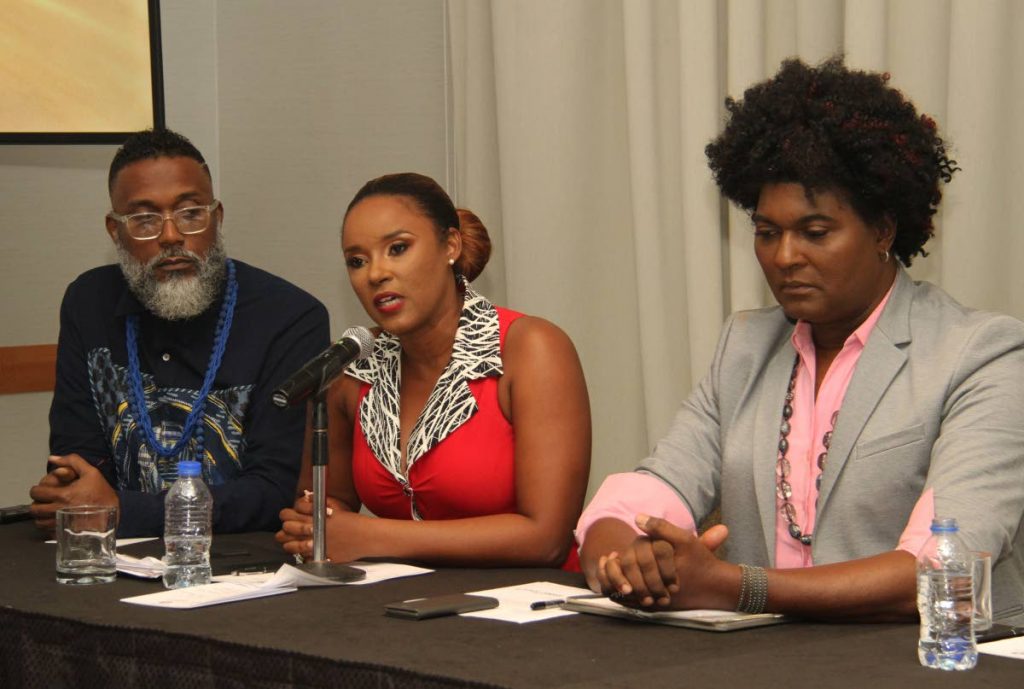 Dyer-Griffith added: “On the Saturday, May 25, we are going to ensure that we fulfill our corporate responsibility, in that the O2N Trade Gallery will be free to the public. And to add value to the event we are introducing the O2N Eco System, which will be a digital platform to encourage entrepreneurship beyond the point of the two days, because what it does is, it marries fashion, performing arts, creative arts, and technology.

“The other element that we have added is the O2N Zen Zone to introduce an element of wellness in the 02N Style framework.

Richard Young, O2N Style 2 creative director, said he is exhilarated that they are bringing designers together in a space where they are claiming their identity as fashion imagers and making their style trademark be aligned with the international lines like Italian style bespoke, British style, French Parisian style, and Caribbean style.

“Trinidad might be considered the mecca for it because per capita what we project creatively and the quality of what we project is really high. It is very important for the identity branding aspect. I have become an advocate for the Caribbean aesthetic and I believe that indulgent preoccupation about stating that we are Caribbean is what is going to push us to the front. So we are moving forward with this brand.”

He said under the O2N Foundation he is allowed to put people in their respective spaces and make them feel proud of who they are. “We are not just designers who happen to be in the Caribbean, we are Caribbean designers and we must proclaim it unapologetically and unabashedly.” Then commenting on the fashion capsule presented by Claudia Pegus, Robert Young and Celeste Singh, he said: “Looking at those fashions we are resplendently Caribbean and that trademark must be clear. We are now sensitising the world to a trademark style that is Caribbean style and then there is a demand for that style that is going to happen out of that sensitisation and then we can go about servicing the Caribbean.”

Part of the growth of the creative industries Young said is about being creative, competitive, export driven and being technological.

He thanked CreativeTT and ExportTT for supporting the venture noting that the scope of what they are doing through those entities is now widening. “So it is not localised and it is not staying in an immediate space. It’s widening regionally but accessing international markets.”

Young then promised a hallmark presentation in 02 Park.

The O2N Style has since been taken to Antigua, Guyana and New York with much success, and it is the intention of Dyer-Griffith and Young to take it to Tobago and St Lucia, with ongoing talks with Belize to have it there.

“Once we expand the digital marketing and sales opportunities for SMEs, artisans and designers we can ramp up addition sales,” said Dyer-Griffith.