“I love my life,” is the life motto of 26-year-old Surya Hosein, one of the many people in TT living with Down syndrome.

A CinemaONE Ltd ambassador and one of only a handful of people with Down syndrome in the country who are employed, Hosein is paving the way for the differently-abled and is changing the way they and their disabilities are perceived, one hug and smile at a time.

“Wednesday in July, 2018 was the first day I came to work,” Hosein said. “I felt it was good, it was good being here,” Hosein told Business Day.

Ingrid Jahra, CEO of CinemaONE which manages IMAX Trinidad and Gemstone, is one of the few employers in the country to employ a person with Down syndrome. 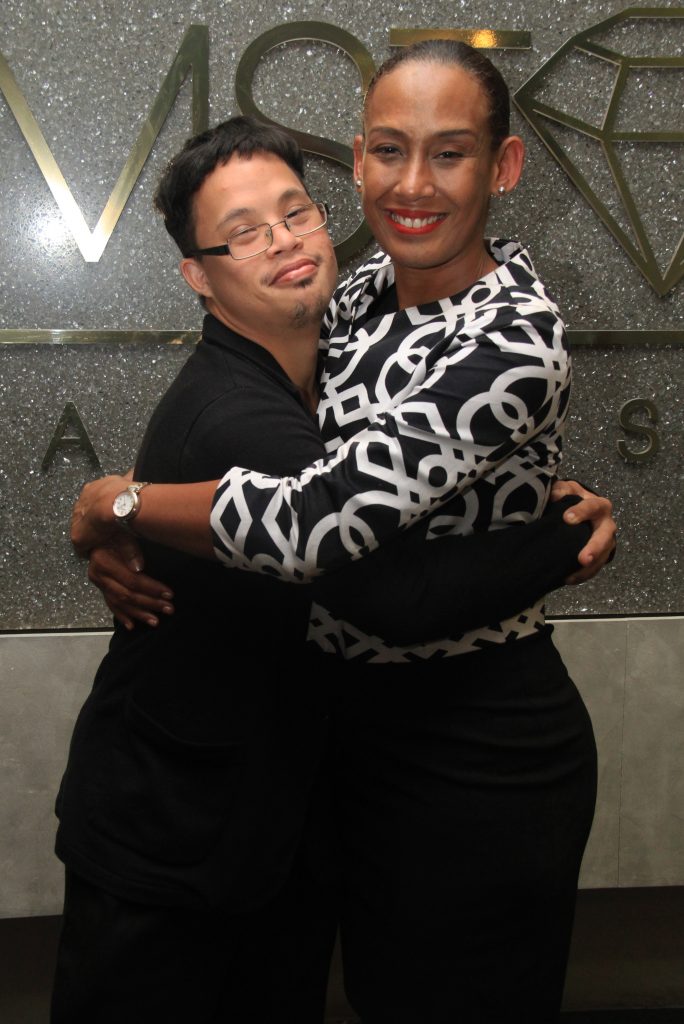 “When I first considered employing someone that was unique or differently-abled I had just come back from a conference where I had seen a video of another theatre employing differently-abled people,” Jahra said. “So I came home saying, 'why we can’t do that'?”

Jahra reached out to Lisa Ghany, board member of the Down Syndrome Family Network (DSFN), who referred Hosein.

“The Down Syndrome Family Network has a mentorship programme that approaches corporate TT to employ (people with Down Syndrome) and give them an opportunity to work,” Ghany said. “So Surya was one of the persons we chose as ready to be able to work.”

With a lack of inclusivity for people with Down syndrome on the job market, Hosein’s opportunity for employment was seen as an anomaly.

“We never in our wildest dreams thought that Surya would be able to work,” his father, Steve Hosein, said. “That was never on the agenda purely because of the fact of fear and non-acceptance. So this is why when Surya was given the opportunity to have the internship it was almost impossible to believe or even dream. But what I find amazing is that once people get past the fear they are surprised by the wonder of these children.”

With his duties ranging from tearing tickets and cleaning the theatre to bringing food orders between floors, Hosein’s good work ethic and presence at the theatre exceeded all expectations of Jahra and her staff.

“I heard from the staff that it’s a good thing we stuck it out because he’s fantastic. Surya does all the things you want (from an employee) — he comes on time, he’s very pleasant, he’s very loving, and he gets the staff in a good mood,” Jahra said. “The staff has become better people — we’ve all become better people as a result of Surya being here and working with us.”

Like Hosein, there are many people with Down syndrome who are able to work and contribute to an organisation but are not afforded opportunities for employment. As a result, for the past eight years Ghany, through the DSFN, has been attempting to change this narrative by educating and raising public awareness of the misconceptions about people with disabilities.

“Companies are not aware of the potential of people with Down syndrome so we don’t see many of our disabled persons employed in work place. If you are employing someone with a disability you have to do certain things to accommodate them being able to function in those places,” Ghany said. 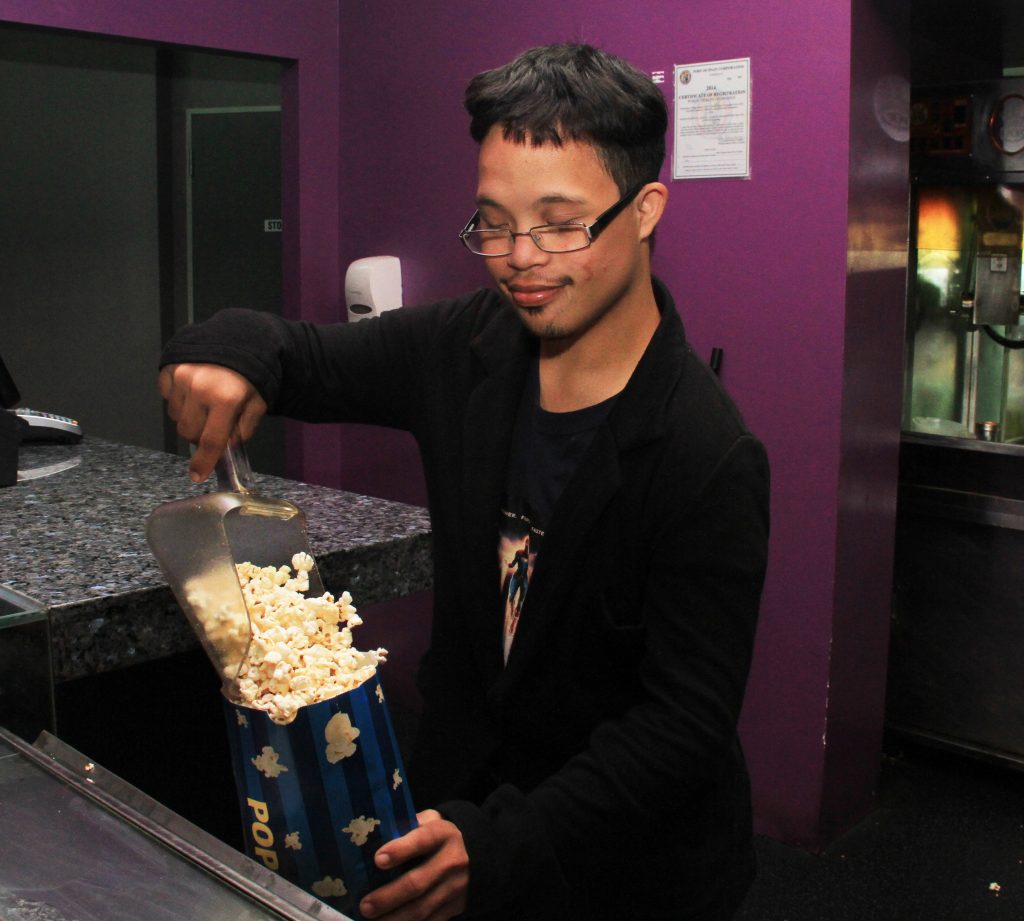 Like Jahra, Ghany believes that the mentorship programme is a stepping stone for a more inclusive job market.

“The attitudes of employers are changing,” Ghany said. “We’ve been working with the government to get policies implemented for persons with disabilities instead of just leaving it up to the discretion of a person feeling empathetic and feeling like it’s the right thing to do.”

Exceeding his potential as a worker, Hosein has contributed positively to his workplace by bonding with his staff members and customers.

“After the movie when people are coming out he’ll ask how they enjoyed it and every time he sees me he would come and hug me,” Jahra said. “Surya has to shake everyone’s hand when he comes to work and hug everyone when he going and find out how they going.

“Last year for the Buddy Walk around the park, the staff came down to support Surya,” Jahra said. “And when he came in for World Down Syndrome Day, the whole staff was in their socks and they welcomed him when they saw him walking in.”

While Hosein is thriving in his work environment, the biggest challenge he and his family have faced is the lack of acceptance from family members and society.

Before attending Goodwill Industries for ten years, Hosein attended Bliss, a school for children with Down syndrome established by his parents, Steve and Shelley Hosein.

“We had to physically open a school for Surya when he was small because we couldn’t get him into any school,” they said. “You can’t get (primary and secondary) schools generally taking in these children. There are no allowances made for them anywhere.”

Despite the obstacles in his way, Hosein became the captain of the bocce team at Goodwill, an avid chess player, a model, and was even in the company of prime ministers and soca artists alike, epitomising perseverance.

“(Surya) wanted to play football and we took him to a coach, but the coach didn’t accept him and he wanted to do other things, but he wasn’t readily accepted,” his father said. “But then he joined Cheryl-Ann Sankar’s taekwondo dojo in Petit Valley, and he’s been there for about 15 years and now has a black belt.”

Hosein represented the country in the Costa Rica Open Taekwondo Tournament 2017 and was asked by Goodwill Industries to help teach students the discipline.

One of four brothers, he is held to the same expectations as any other child, as he is responsible for completing his assigned chores and cooking meals. His favourite dish is pelau.

“We decided very early that we were not going to hide Surya and we were going to treat him as normal as possible,” his parents said. “We would take him everywhere and expose him to everything and who don’t like him would just have to deal with it. That’s how we moved on.” 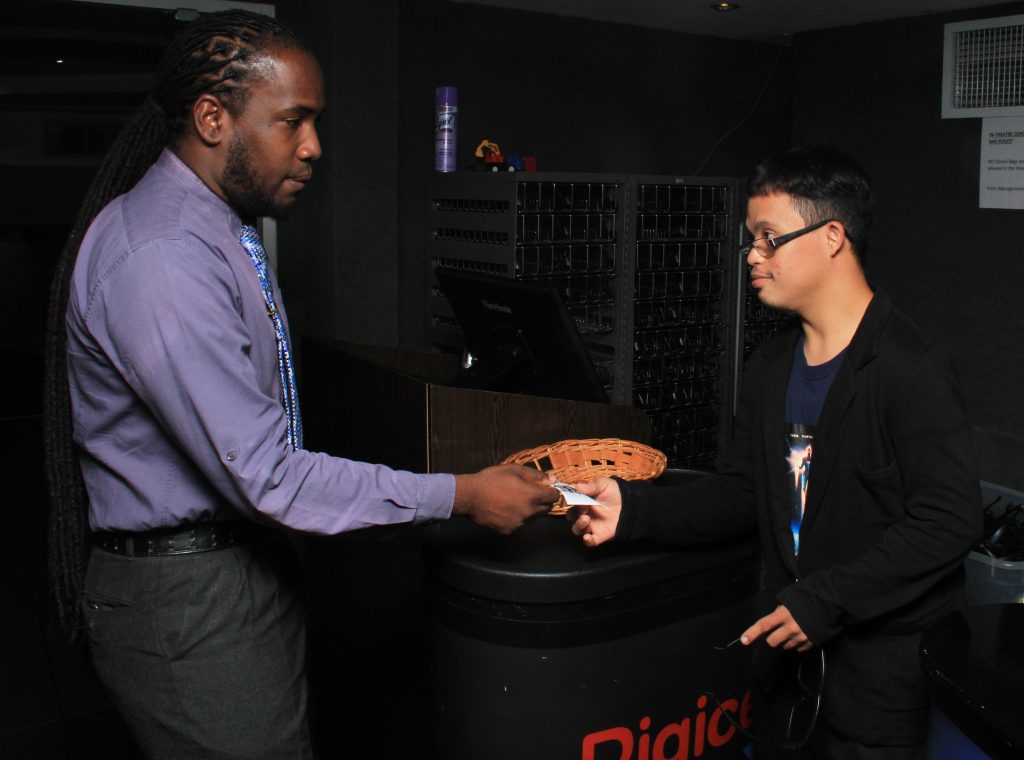 With the recently concluded Special Olympics World Games in Abu Dhabi, United Arab Emirates where the national team brought home a total of 57 medals, his parents are hopeful that more light will be shed on the abilities of the differently-abled and more companies will understand and open their doors to having them as employees.

“I am especially happy for Ingrid, Jahra and DSFN because without them Surya would not be where he is today. We have nurtured him but they have opened the door,” his father said. “And I hope that a lot of people will follow CinemaOne and Mrs Jahra’s example and open doors, because everywhere you go now, every part of the world, there are children with disabilities. But mind you, it’s disabilities that come with wonderful abilities.”

* World Down Syndrome Day was commemorated on March 21, and in that day's issue, Business Day featured Christy De Souza, a Down syndrome woman who has worked at the Office of the Prime Minister.