ON Sunday night many tuned in to watch the annual Academy Awards. But in five years if Belmont-born, award-winning actress Taromi Lourdes has her way she will be up there collecting a golden statuette herself.

Lourdes spoke with Newsday last week about her Oscar dreams, her career and her recent win for Best Actor at the Women's Worldwide Film Festival for the post-partum depression (PPD) film Hush-a-Bye.

She began working on the 29-minute film in 2017 and explained that it is about the effect of PPD not only on the mother but the father and the family unit.

"You see that husbands and fathers are really affected. And I wanted to include that to show it in its totality. Men are always forgotten in these women's issues but with women, men are also affected."

She said the impetus was a couple of incidents in TT: in 2016 a young mother threw herself out of a window and this was linked to PPD; and in La Brea there was a case where neighbours reported a family of women were living with a dead baby but were dressing it up and having it on the bed.

Lourdes decided she wanted to dig deeper into the issue and shed some light on it. She wrote ten pages in one weekend and the story "just flowed."

"I told myself this story needs to be told."

She said some husbands are not even aware their wives are going through PPD. She recalled a line in the movie where a character says she "just going through baby blues."

Lourdes added, "Not knowing that if this 'baby blues' lasts beyond a certain time it is known as either anxiety, depression or could go into full-blown psychosis where the whole suicide/murder dance comes into play."

For her research she interviewed mothers, watched documentaries on YouTube and read articles online. She recalled one interview with a local mother about PPD.

"And the doctor told her 'Trinis don't go through that.'"

Lourdes stressed we need to start "getting real" about mental health illness on a whole and expressed hope her film starts conversations in TT and in the region.

She wrote, directed, produced and starred in the film and she said at times the multiple roles were exhausting.

"I always take things in good stride. Everything is a learning experience. And it's somewhere I can grow from."

She said there were times she was in director mode and yelling "action.," forgetting that she was "the action."

Lourdes sent the film to a lot of festivals and received some rejections.

"All of that is in it. Being a creative. But you get thick skin."

Hush-a-Bye was accepted for the TT Film Festival in September 2018 and at that festival Lourdes also featured in the films For the Love of Money and Lady in the River. In December last year the film was accepted for Canada Shorts ­– Canadian and International Short Film Festival and received an award of merit.

The film was also accepted for the Women's Worldwide Film Festival in Phoenix, Arizona held earlier this month. Lourdes was elated when she heard the news and was excited to meet other female filmmakers and do networking.

She recalled at the screenings in the US the film hit home to American women the same way it did in Trinidad and received similar feedback. During one screening in Arizona, two women walked out initially saying they could not watch it but when they saw the next scene they returned.

"As a writer, as a director, you want to evoke certain emotions."

Lourdes said for her story she wanted to go as far as possible but make the character still sympathetic. She reported the screenings had a full house and she participated in a Q&A after and she received a very good response. She said people both in TT and Arizona encouraged her to do films on other disorders or conditions like autism.

"It's always encouraging because they like the job I did with this."

During the festivals awards ceremony Lourdes was attending another screening and when she arrived she was told she won best actor. 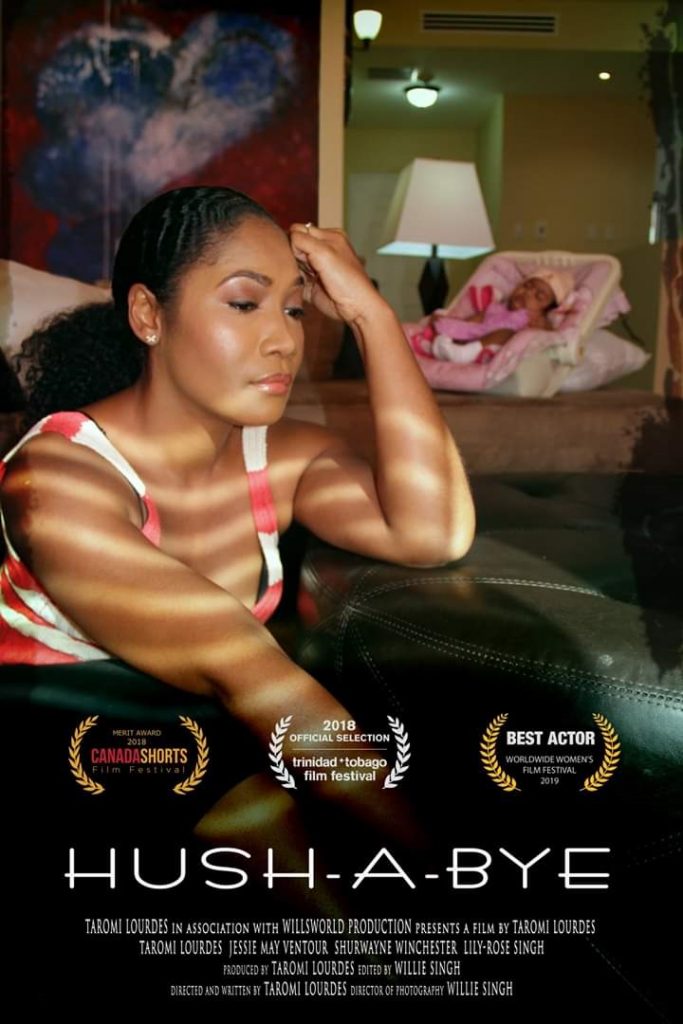 She called her sisters, friends and her cinematographer.

Lourdes said she hoped the film will be featured in other film festivals and planned to do community screenings in Trinidad. She said a clinic in Orlando and Minnesota had asked about the film.

"So it's getting out and I am happy about that."

She also wants to do more writing as she has a lot of ideas.

Lourdes started in theatre in 2005 and has been acting in film for ten years. She is also a dancer, singer and model, and keeps herself organised with a white board. She watches a lot of motivational videos on YouTube, including late US motivational author Louise Hay, and has gotten better with her procrastination.

"I just tell myself tomorrow is not a guarantee. Get it done now. Focus on the bigger picture; you can sleep later, you can watch that movie later. But get this done. This is your career. This is your path. Just get it done."

Lourdes said in Trinidad acting jobs have grown and she has repeat clients.

"Every year I've had something whether it's a play, it's a TV ad, a print ad, a voice over, I've been doing stuff. And I've also reached to the point and comfortable with negotiating my price."

She added: "So I think that kind of growth is good. Because creative's talent here is undervalued tremendously."

She is currently preparing for a move to the US where she plans to focus on her acting.

"I am going to hit that pavement."

She said during her Arizona trip and years before she has done a lot of networking and made contact with acting agencies.

"I receive e-mails every day with castings, auditions. So I will be busy."

Lourdes said she was very comfortable with starting off as an extra or the girl in the background bringing the coffee.

"Because I want to learn and observe as much as possible. So one day I could be the one calling the shots. And to just have a total and holistic knowledge of how the industry works."

Lourdes said before the year ends she plans to land a role in a US TV series or a Netflix series. For 2020 she hopes to be directed by Jordan Peele and work with Tobago-born actor Winston Duke, a breakout star in 2018's gargantuan hit and Academy Award-winner Black Panther. She did a play with Duke years ago through the Trinidad Theatre Workshop and described him as an inspiration.

"So I hope to team up with him again, hopefully on the big screen. Who knows? Maybe in Black Panther 2."

She added: "The time is right for diverse people so I will totally capitalise on that."

She said in five years she is hoping for an Oscar nomination and possibly a win. She also hopes to win Emmys and Tony Awards, though she needs to work on her singing.

Lourdes says her advice to aspiring actors would be to "go for it."

"Everybody can't be doctors and lawyers. The world needs creatives."