Diversification in TT is often considered to be exclusive, away from the energy sector, but at the National Energy Corporation (NEC), it’s more of an evolution within the industry.

“There are other arms to the energy sector — renewable is energy, methanol and using that methanol to develop a new industry is a new sector as well. And all of those things are about diversifying the energy sector and building it,” Dr Vernon Paltoo, president of the NEC told Business Day in a recent interview at the state agency’s campus in Point Lisas.

The NEC is a subsidiary of the National Gas Company, and while not quite as well-known as its more ubiquitous parent, the corporation has quietly established itself as the foundation of TT’s energy sector.

Started 40 years ago as part of Government’s thrust to monetise hydrocarbons and build capacity in the industry, the NEC undertook the monumental tasks of overseeing the construction of several of the core assets of the country’s energy sector, including the NGC’s cross-country pipeline, TT’s first methanol plant (now owned and operated by Methanol Holdings (Trinidad) Ltd), the expansion of the Point Lisas Industrial Estate, Union Estate in La Brea, and the port at Galeota. The State’s aim, Paltoo said, was to prove to the world that Trinidad was capable of being a leader in downstream energy industries. 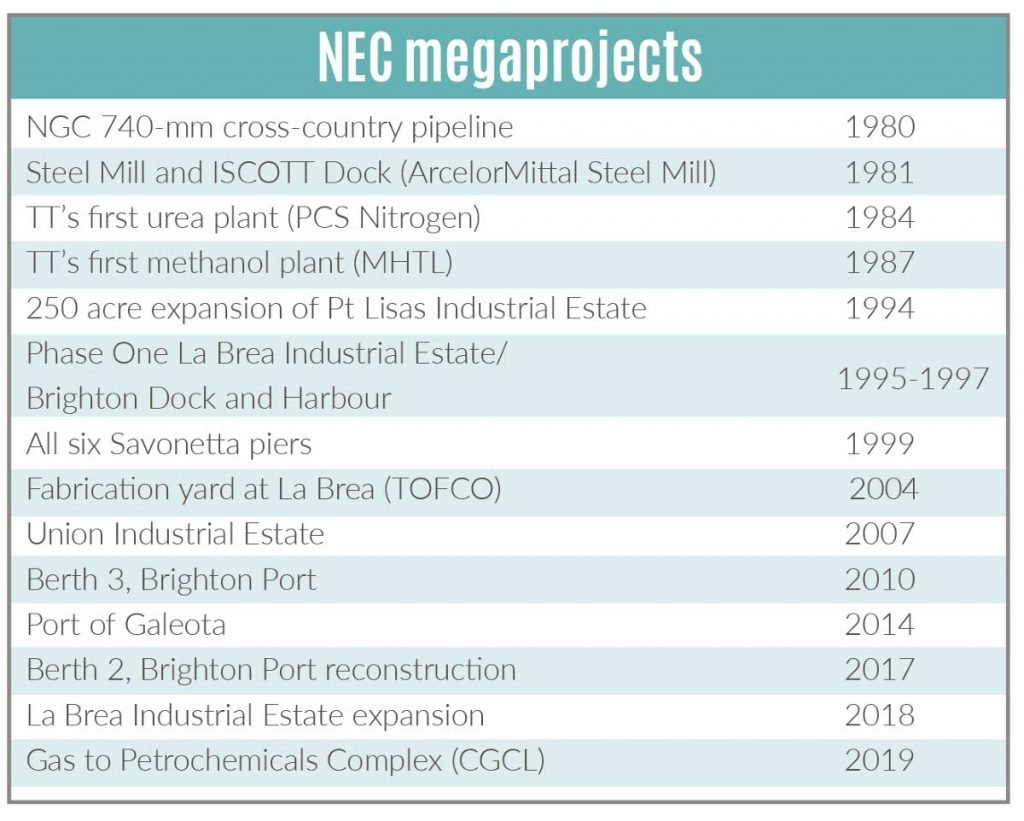 Now, the company is looking to transform the economy again, this time through long-term, sustainable projects, including a move towards more renewable energy projects in the face of ongoing natural gas curtailments, and expansion into new markets like Guyana, Suriname and Grenada.

“The energy sector in itself has to diversify and that has always been a discussion on the agenda for a long time. You would see that all of these things we are doing is about diversifying and building the capacity within the sector. You don’t have to go outside the energy sector, you can go within it, which is about services industry — we are building that as well. If the resources aren’t readily available, (we want to use) the capacity and skills over the last hundred years to build and remain relevant,” Paltoo said.

It’s a “deliberate effort,” he said, to move away from projects that rely on gas, but it’s also ready to expand on current projects if the gas supply picks up. The challenge, though, is getting outside the traditional industry. “We are planning for all the scenarios — high gas and no gas scenarios,” he said.

The future, he said, will be moving into projects including float glass, polysilicon photovoltaic tiles, and methanol to olefins (using methanol as a raw material to make plastics).

The company is looking to develop the north and south parts of the Point Lisas Industrial Estate to house these projects.

“Now that does not mean if there’s a suitable supply of gas we would not continue with the gas-based industries, however, we need to plan for different scenarios,” Paltoo said.

It’s a systematic and structured process, he said, to find viable options that can take the industry at least into the next couple of decades, including a variety of projects to fall back on if any fall through.

“Because of constraints in the demand and supply of gas, we have taken an approach that a lot of the projects we will be doing will be less reliant on (cheap) gas. A lot of these projects don’t require gas or substantial gas as an input, and yet they can deliver the same benefits as some of the bigger industries and bigger gas projects,” he said, noting the company is striving to encourage efficiency in the sector.

Melamine, for example, has been produced in Trinidad for almost a decade. The NEC proposes using some of that melamine to develop new industries, like cross laminate time or CLT, which has the potential to change the housing market in TT. There’s also a photovoltaic cell manufacturing park (solar panels) and a polyolefin projects (plastics).

These new projects, along with other efficiency and service-driven concepts, have the potential to give an extra one to two per cent boost to GDP, encourage nearly US$4 billion in foreign direct investment, and create 7,000 new jobs, Paltoo said.

The NEC is also involved in the Caribbean Gas Chemical Ltd project, set to open later this year in La Brea, and aluminium manufacturing projects, which was recently launched in Tamana.

It may take a couple of years for each project to get off the ground, that’s why it’s a continuous process, Paltoo said, so by the time one comes on stream, another is already in the works.

The company is also strengthening its commercial activity by going out of TT to promote its logistics and port operations, capitalising on the nascent oil booms in Guyana, Suriname and possible gas production in Grenada, places which do not yet have large-scale energy port infrastructure that the NEC already has.

“The NEC operates three ports at present, Point Lisas, Galeota and La Brea. We have been actively engaging business in Guyana, Suriname and Grenada. That’s our next phase of growth, utilising our assets here to grow our market, and grow the services that can make money,” Paltoo said.

The NEC is also a core part of the State’s drive to encourage large-scale renewable energy projects that can add to the national grid, as part of the evaluation team to review proposals already submitted to the Ministry of Energy.

Paltoo acknowledged that in TT one of the challenges for renewable energy is competitiveness – the current price of electricity produced from natural gas is among the cheapest in the world.

Legislative change and incentives will be required to encourage companies to join the grid. “In due course the subsidy on electricity will be removed over a period of time because it’s not sustainable. And then renewable energy will become more competitive, just as the cost of renewable energy is coming down. Only a matter of time before it becomes competitive and that will allow gas used for electricity to be used for higher value purposes,” Paltoo said.

There’s also a lot of energy wastage, so the NEC is trying to encourage energy efficiency, especially among companies in the industry. One of the new services they are trying to implement is helping to create super energy savings companies (super ESCO), by going in and advising companies how to become more energy efficient.

Paltoo noted that in the current economic climate, people are less willing to invest, so the NEC has had to be innovative in its projects and ideas to remain competitive but also prove that diversification in the sector can be done.

“It’s not easy but we have still shown how we can drive investment and the investment discussion. We have still managed to grow our business. We are critical and integral to making sure the continued growth and investment in the energy sector is a sustainable one that allows the country to grow and not be reliant on one industry. We are not waiting for new gas to come on stream and have new projects just waiting. We are thinking about how this industry is going to be built and survive for the next 40 years. We’ve done the first 40. It’s the next 40 we’re trying to look towards,” he said.