One would think that a sailor is a relatively simple concept – a person working on a ship or boat. But Barbadian visual artist and writer, Adam Patterson, and Trinidadian poet, Andre Bagoo, took the concept of the sailor to a very different level last Sunday at Alice Yard in Woodbrook at Patterson’s event, Sailors.

As people walked into Alice Yard, the first thing they saw was a projected image of a sailor in a gold mask, wearing a sailor’s hat with a conch shell near his ear as he listened for something, sitting peacefully in the sand with fruit nearby. “For me it’s a framed, artificial image. It’s almost like an ideal and you wouldn’t see anything like it naturally. I call it a still life because it’s very much put together to make this desirable image,” explained Patterson.

He said his investigation into the sailor character was linked to an ongoing project, a film, Looking for 'Looking for Langston", which was commissioned by the Live Art Development Agency in London as part of the Edge of an Era project, which looks back at performance art events from the late 1980s in the UK.

“I became aware of the existence of Isaac Julien’s Looking for Langston in my early teenage years, through scraps of images, stills, clips, and texts available in the expansive wilderness that is the Internet. Growing up in ‘queer’ isolation, courtesy of Barbados, my experience of sexuality for a while was not conventionally physical but relied heavily on indulging in the seductive properties of digitally-available material...the various artistic, cultural, and creative queer materials and artefacts that managed to breach, penetrate, and transgress my island’s conservative horizons via my own intimate adventures and elopes into cyberspace. Julien’s Looking for Langston proved and proves the most elusive as I have yet to find it in its entirety.”

Sunday’s event was semi-extemporised with still images from his film, edited to seem as if the view was through a spyglass, projected at various points around Alice Yard. He also performed a monologue from his film dressed as his film's character, the Captain.

He explained that the Captain, who wore a mask, had a beak, binoculars instead of eyes, and a feathered uniform, had elements of the Barbados Landship in its behaviour and aesthetic.

“You get this staring, voyeuristic kind of bird. The character is looking out to the still life image – framed, very put together based on someone’s desires and fantasies – of the sailor and ruminating on what he’s seeing. And you’re not sure if it’s a mirage, a memory, a dream, a fantasy, whether it’s real or not.

“It was a conceptual look at the character of the sailor in a very broad sense whether it relates to Trini sailor mas or the sailing motif in the Barbados Landship or just the sailor at large... the different global understanding of that.”

In addition to the images and performance, a film-poem, created by Bagoo for the event, played on a loop in a corner of the Yard. The poem, Langston Hughes in Trinidad – A Closet Drama in Five Scenes, was one from his book, Pitch Lake.

Bagoo said the name was a play on words because a closet drama was a play that was meant to be read instead of performed while being ‘in the closet’ meant someone who had not disclosed their sexual orientation or gender identity.

The film-poem was installed in a dark room where it played throughout the night. “I wanted it to be something people stumbled upon, to be curious about what this thing in the corner is because I feel very often things are suppressed and placed in a corner, sexuality being one of those fraught things people are not encouraged to address.”

Patterson said Bagoo’s film, audible in the background, gave the space a seductive feel, creating a fantasy world of desire with a sailor motif. The final aspect of the event was discussions between Patterson and Bagoo in full view and hearing of the audience. “It’s about taking these things, sailor mas and Landship, that are shared between our visual cultures and having a conversation about them which made nods to the original traditions. But also to recognise how they appear elsewhere in different forms with different meanings.” 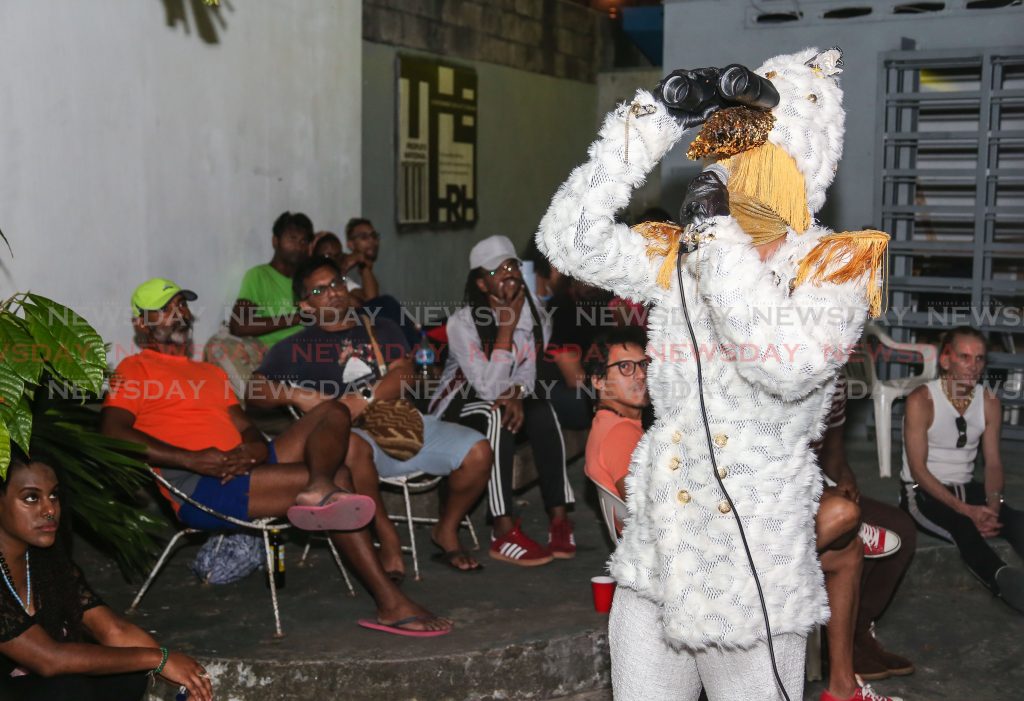 Bagoo explained that before American Langston Hughes was a writer and poet, he was a sailor and there was controversy over his sexuality.

When the film, Looking for Langston, was released in 1989 it suggested Langston, who died in 1969, was a key figure in the gay scene in Harlem, New York. Bagoo said the idea was officially rejected by some academics and biographers because there was no proof, while others believed he was asexual.

“Yet the same evidence these people referred to showed he was surrounded by gay men and he had intense emotional relationships with a lot of these men. In one instance, when he was a sailor, he recalled having a sexual encounter with a man.”

When Bagoo researched Hughes for his poem, he came to the conclusion that Hughes was queer, if not gay, and may have been in the closet but strategically used his queerness to his own end. “I find him to be a rich figure who reflects the fraught way in which we construct our ideas of ourselves.”

Therefore, when Patterson approached him about a show engaging Hughes, he was eager to participate.

“Adam and I discussed sexuality’s mediation through a sea of oblique encounters – be it in books, on screens, through spyglasses. For me, making another film poem fit. I wanted vast complexity relegated to a small screen in a small corner, mirroring how queer sexuality in TT is often suppressed and gazed at furtively in discrete recesses. Hughes, who visited Trinidad and had ties to this country, is the perfect symbol of how queerness is dismissed and etherised by straight power.”

He said while sailor mas was a distinct form in the Caribbean, a sailor was a universal symbol of someone who went beyond boundaries. He said it was a metaphor for an attitude and a mindset, and that artists should be the same in engaging different forms.

“I was drawn by the inter-media nature of Adam’s practice as an artist, the fact that he engages moving image, performance, and literary. I felt it mirrors my own explorations of how form and how the poem should be regarded in a wide sense, not just a sonnet or sestina, but it’s also a question of media and incorporating other things be it the visual, dance, performance or instillation.

“Performance need not be a grand gesture. In fact, it’s the supposedly smaller everyday roles we perform as women, men, father, mothers, lovers in our homes or in quiet corners of art galleries that matter. As the opening line of my poem suggests, Hughes was a performer all his life.”