Surujpat Harbans must be the most unlikely man to win an election in Elvira, a country town in central Trinidad.

Like the yappy, banana-republic hustler in the White House today, Harbans seems unqualified for anything, a man without character or purpose.

At most, he has the personality of a chicken, a fussy cowardly one.

He coos. He fidgets. He fears white women and a black dog he meets on the road, though they’re nice enough to him. He’s a man who’s told what to do, and how; a man so apparently harmless he’s the best choice in the first election in Elvira, which was a multi-tribal district more or less at ease before suffrage.

Chittaranjan the goldsmith is director of this hilarious rural romp, guiding the bumbling Harbans and associates across the schoolyard of Trinidad’s infant democracy. 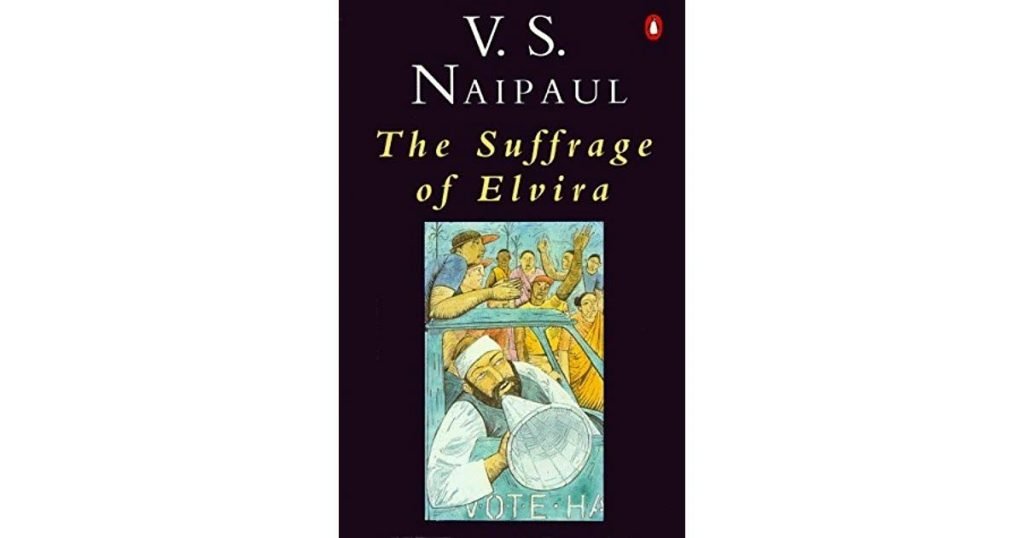 Few fictions today capture the character of a certain Trinidad as Elvira does. That Naipaul was 26 when it was published in 1958 is exceptional. If you want to know Trinidad, see why it’s rotten today, read the novel, which is without doubt a masterpiece of political dissection and analysis. Reading it so many years later one can’t help think of its accuracy in showing the future.

And therein lies its sadness, its innocence.

The critic Mel Gussow observed that Guerrillas is Elvira 20 years later, “a savage and mordant view of society in collapse.” So the corruption grew up, and today has gone “world class,” to slightly adjust the words of former Trinidad PM Patrick Manning.

Mrs Baksh, resident prophet, frequently warns both her husband and son, Foam: “Is this election sweetness that sweeten you up, Baksh. But see how this sweetness going to turn sour sour. See.”

“She was righter than she knew,” Gussow noted.

Baksh has his own plans, though they’re feckless and, ultimately, divisive. There are Muslims, Christians, Hindus, Catholics and Witnesses competing for the right to vote, to exercise opportunities for financial gain, and status. Afro-Trinidadians play off against Indo-Trinidadians too, of course. Chicanery, superstition and blatant vote-buying occur.

The comedy is fast and devastatingly funny and one of Naipaul’s best efforts in that regard. Here’s a classic scene involving Chittaranjan and Ramlogan, the unforgettable rum shop owner.

“Take your fat, dirty hands offa my fence,” Chittaranjan snapped. “A nasty blow-up shopkeeper like you want to put your hand on my fence?’

“All right, all right. One day I going to build my own fence, and then you don’t touch it, I warning you.”

“But till then, take your fat dirty hand offa my fence.”

Then, unexpectedly, Ramlogan began to cry. He cried in a painful, belly-shaking way, pumping the tears out. “You don’t even want me to touch your fence now.”

At the end of the novel, these two clowns are friends; but Elvira is more divided than ever and its population feckless, infantile and more picaroon. We should not forget that this story, as Gussow sees it, ends with the novel Guerrillas, with that despised word so ironically uttered by Jimmy, the mad Muslim revolutionary, to Roche, the disillusioned revolutionary from South Africa.

Massa. And the story goes on.

To mark the 60th anniversary of the book, dramatised excerpts from The Suffrage of Elvira, directed by Prof Ken Ramchand, will be performed at the National Library Rotunda from 11.30am to 12 pm on April 28 as part of the OCM Bocas Lit fest.