Hill rice is a symbol of the gutsy resourcefulness of people descended from free West African-American settlers in south Trinidad who survived through their own ingenuity and efforts.

Story and photos by SHEREEN ALI

Octavia Roberts, better known as Leonise, is a most vigorous, independent woman descended from West African-American immigrants, people who came here 200 years ago from North America.

Called “Merikins” as a creolisation of the word “Americans,” they brought with them trades skills, some Baptist beliefs, and a bold determination to survive. They also brought with them grains of a distinctive red-bearded hill rice which they’ve been planting here quietly for generations – a variety that links her people here with ancestors in both America and West Africa.

At her home in Indian Walk in the deep south of Trinidad, Leonise enjoys taking care of a tribe of energetic, happy koi fish in outdoor concrete tanks which her family made themselves. She is a mother to three children, and is proud of her Merikin heritage. Indeed, her neighbourhood of Indian Walk (so named because it was once a pathway for Warao people from Venezuela) is also the site of Third Company, one of several Merikin villages established in south Trinidad in 1816. It was Leonise who introduced me to her cousin John “Darkie” Elliott, who grows hill rice in the area. 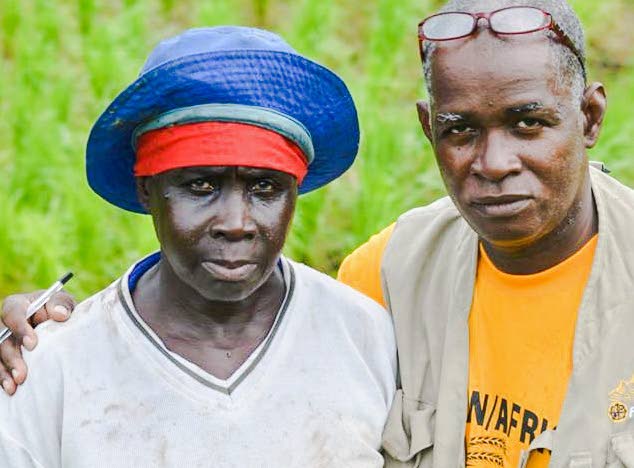 From Arima to Port of Spain to Princes Town, the story of hill rice origins in Trinidad is a meandering journey linked by a rope of kinship connections based on Merikin heritage. People still grow hill rice, although it is mostly grown by people over 55 who still remember the lessons of survival from their past.

The interesting thing about hill rice is that it is a relatively hardy, versatile plant which, once there is a rainy season, can grow in back yards instead of wet, marshy fields requiring irrigation systems, said farmer John “Darkie” Elliott. In Africa, hill or dryland rice thrives in light soils wherever there is a rainy season of at least four months, and it is often interplanted with millets, maize, sorghum, sesame/benne seed, cassava, or cotton. Hill rice can mature in as little as three months, so is a good survival crop. The Merikins began planting it here in a labour-intensive, demanding process, from clearing forested land to cleaning the milled rice.

Home-grown rice was one of several crops which helped sustain many enslaved Africans in the American South who planted gardens to feed themselves, until around the Civil War there and the Great Migration, when many of them left the South in droves. Even further back in time and space, home-grown rice of many different varieties fed many communities in West Africa, where rice growing was a tradition for more than 3,000 years. Africans in different areas of their homeland grew hill rice, paddy (or lagoon rice), and floating rice varieties, and used many species of both native (African) and foreign (Asian) origin. The humble Trinidad hill rice is now being seen as a living food link to the African diaspora. 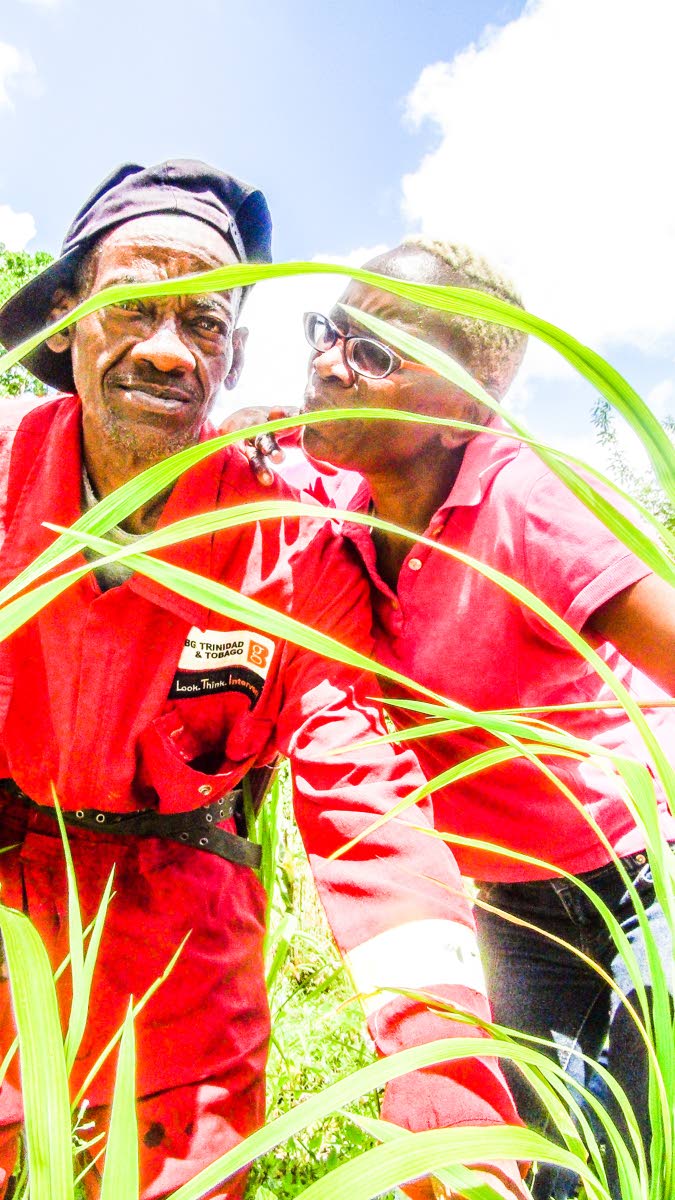 But it took a New York Times article about finding an allegedly lost strain of rice (by Kim Severson, published February 13) to make the general public in Trinidad sit up and give hill rice some respect.

Botanical researcher Francis Morean, however, has long led initiatives on the importance of hill rice, interviewing local hill rice farmers for years, and organising the first TT symposium on it in 2016 on the theme Connecting the Grains of Rice in West Africa and the Diaspora. He observes that too many of us in Trinidad do not value our botanical heritage, local agriculture, or even the importance of our environment.

Morean, perhaps best known as a purveyor of folk herbal remedies, is especially fascinated by folk and agricultural traditions relating to his own Merikin heritage. He said: “I grew up planting hill rice in Palo Seco. My grandmother, mom, elder brothers, all planted hill rice. From a child, I’d be in the garden with my elders, helping … Men would clear the big trees, and women and children would plant. An adult would punch a hole in the ground, and the children would put in six to eight grains, and cover it with dirt. Children would chase the birds away with the noise of a beating pitch-oil tin.” 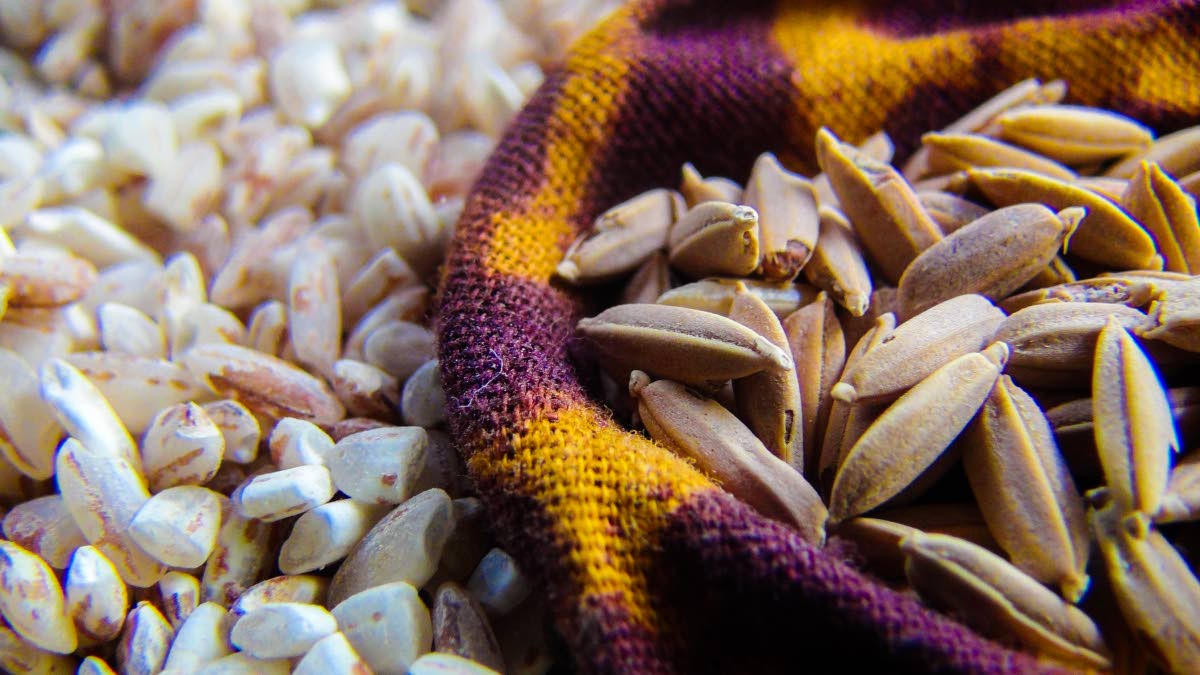 “Kids would be involved at harvest time. We’d chase the fowls away! My mother and grandmother stitched large old sheets or big pieces of cloth together, on which we’d dry the rice. Our area flooded a lot in the rainy season, so sometimes we’d have to dry the rice inside the house.” The family would plant many other crops too, including lettuce, pigeon peas, watermelon, pumpkin, bananas, tomatoes and cucumbers, and of course they kept yard fowls. Says Morean: “In those days we rarely ever sold anything. We were fairly self-sufficient in the 1960s and 70s.”

“There’s a healthy tradition of subsistence farming in south Trinidad,” Morean says. “A lot of elderly men would visit my grandmother’s house to help her pound the rice in a mortar and pestle (removing the husks from the grains). The nucleus of hill-rice cultivation continues in places like the Moruga area and Indian Walk Road, where the Merikin company villages were set up.”

Morean said the oil boom, and more educational opportunities coincided with a rapid decline in agriculture, including hill-rice farming. Today, it’s mostly people 55 and over who still grow hill rice, he said. But he knows three hill-rice farmers who own their own mills, and one family that packages their rice under the brand Moruga Hill Rice. Morean says since the 1940s, it is not just Merikin-descended folk who grow hill rice, but people of diverse ethnic heritages.

Elliott, a farmer, showed me two different kinds of hill rice growing on his land. Morean says it’s possible that the existing varieties of hill rice in Trinidad are hybrids.

“We didn’t grow up wealthy, but we always had food,” said Morean, somewhat wistfully, saying he grew up loving the substantial taste of hill rice simmered in coconut milk, topped with a spicy chutney made from benne/sesame seeds.

Akilah Jaramogi is another Merikin descendant rooted in the land. The founder of the Fondes Amandes Community Reforestation Project in the St Ann’s hills, she grew up as a child in Sixth Company, the biggest of the Merikin villages. She is the great-niece of Pa Neezer – Samuel Ebenezer Elliott (1901–69), the famous Orisha folk healer, who was named after his forefather Samuel Elliott, a fighter in the Forgotten War between Britain and America.

Jaramogi celebrates Merikins as “a resilient people, a people who came with nothing but grains, and tools, and skills, and pride.” For her, hill rice is just one part of a more important story of the courageous survival of a free black community at a time when slavery was still very much going on. And up to today, this part of our history is rarely, if ever, taught in schools.

That feeling of the importance of knowing one’s heritage is shared by Francis Morean, who remembers the indescribable feeling of a lost, fragmented community finding a sense of kinship again when he took a group of hill rice symposium participants for a tour through some Moruga hill rice fields in December 2016.

Said Morean: “There was a very strong sense of re-connection, of people who had been separated from each other through slavery, and war, and other elements, finding themselves back together in a community where a crop was still being cultivated which they no longer had. And that was a beautiful thing.”

What was the Forgotten War?

During the Forgotten War of 1812-14, England promised land and freedom to enslaved West Africans working on American estates who were willing to abandon these estates to join the British military against the Americans. After the war, the African soldiers were sent to the British colonies of Bermuda, Nova Scotia or Trinidad, where some – but not all – families received 16 acres of undeveloped land. In many cases, settlers received no deeds for lands granted. Between 400 and 800 settlers came to Trinidad. They got initial shelter, seeds, cuttings and tools for planting from British colonisers, but after that were on their own. 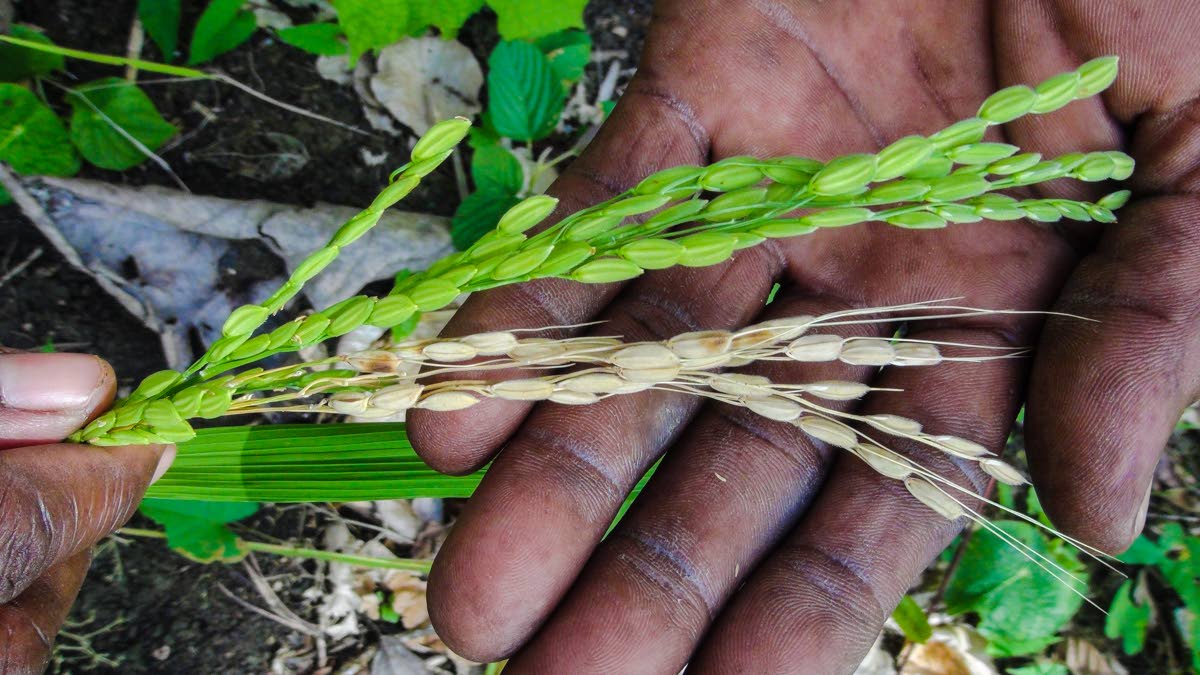