Maloney residents yesterday breathed a sigh of relief, hours after staging a fiery early morning protest along the Churchill Roosevelt Highway, calling on the Water and Sewerage Authority (WASA) to quickly restore pipe-borne water in the community.

“Water is finally coming in our taps so we now have plenty of things to do before Christmas,” an elated Mayers said.

WASA had earlier said in a statement that water was expected to be restored in Maloney and districts in east and north-east Trinidad, which also were seriously affected by a lack of water, from 9 am yesterday.

The Christmas spirit, though, is likely to be dampened for three Maloney residents, who were charged by police with obstructing the free flow of traffic during the protest action. The residents are expected to appear before a magistrate early next week.

The protest, which began shortly after 2 am, created traffic gridlock along the East and West-bound lanes of the highway in the vicinity of the St Barbara’s Spiritual Baptist Primary School and main entrance to the Maloney Housing Development as residents burnt old tyres, appliances and other debris.

Saying they have been without water for more than a week, Mayers claimed their appeals for assistance, through Arouca/Maloney MP and Planning Minister Camille Robinson-Regis and the councillor for the area, had fallen on deaf ears.

“You go by the councillor, he is a waste of time. He saying he cannot do anything,” Mayers said.

“The MP is also waste of time. When you go by the office, it always lock up. She never working, like she never there. They don’t care.” Mayers said the situation in Maloney was dire.

“Before the seven days, WASA were bringing the water for only about two hours. People living in the building in the second and third floor were not getting any water even though they turn it on a little bit,” she said.

Mayers said hundreds of residents were affected by the lack of water.

“Maloney have about 40 building with 67 apartments and we have about 2000 single units and wafters. So, is hundreds of people that did have any water.

Even though they have tanks, they were empty. It was real ridiculous inside of here.”

Alluding to the recent Beetham protest along the Priority Bus Route, Mayers said: “We are not like Beetham people. All we want is a little bit of water. Christmas is one week away and there are people here with little children.”

Mayers, who has lived in Maloney for more than 30 years, added: “This was the worst we ever experienced.”

Contacted yesterday, Robinson-Regis said WASA had informed the community of the disruption in the supply because of the repairs being carried out on a 42’ diameter transmission main at Daniel Trace, Valencia, which supplies the area.

Robinson-Regis said while she understood their frustration, she was disappointed by the protest action.

“There has been a problem with a lack of water in the area for about one week now. We have been sending out messages to the residents informing them of what was happening and we have again asked WASA to bring in a truck-borne supply. They have promised to do that. I spoke with the chairman today and the minister and a truck-borne supply is coming in.”

She added: “I can understand that residents would be upset. I am disappointed they have decided to protest in that way because we have been keeping them informed.”

Public Utilities Minister Robert Le Hunte said the leak in the main was difficult to repair.

“We attempted to fix three leaks and then there was some land slippage which resulted in the leak again reoccurring at another point. And we fixed that. And then unfortunately, there were some other problems.”

Le Hunte said over the past week, the utility has been battling with a particular problem in the North Oropouche area.

“The last time it ruptured the people were out there for days, working almost 24-7 in an attempt to fix the particular area.”

The minister claimed they had increased truck-borne water to the area to address the shortfall in water supply.

Le Hunte said WASA assured him that the water was expected to have been restored by yesterday.

Meanwhile, WASA, in its release, advised customers in north-east Trinidad served by the North Oropouche Water Treatment Plant, that repair to the ruptured 42” diameter transmission main, in the vicinity of Daniel Trace, Valencia, was completed and the supply re-opened at approximately 9 am.

“The pipe borne water supply is being restored to affected areas from Sangre Grande in the East, to Five Rivers, Arouca in the West,” WASA said.

The authority also advised it may take between 24 to 36 hours for the service to normalise in some affected areas.

Maloney residents staged a fiery, early morning protest today along the Churchill Roosevelt Highway, calling on the Water and Sewerage Authority (WASA) to urgently supply pipe-borne water in the community.

The protest, which began shortly after 2 am, created traffic gridlock along the east and west-bound lanes of the highway in the vicinity of the St Barbara’s Spiritual Baptist School and main entrance to the Maloney Housing Development as residents burnt old tyres, appliances and other debris. 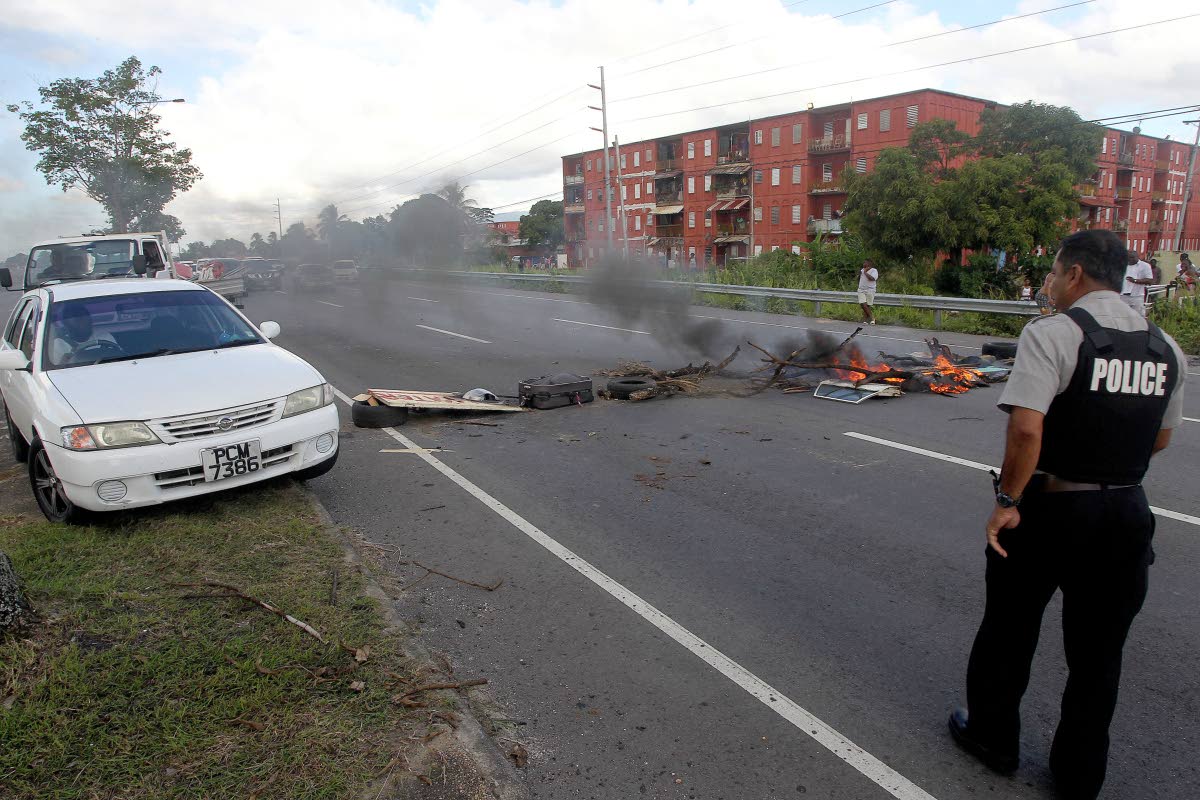